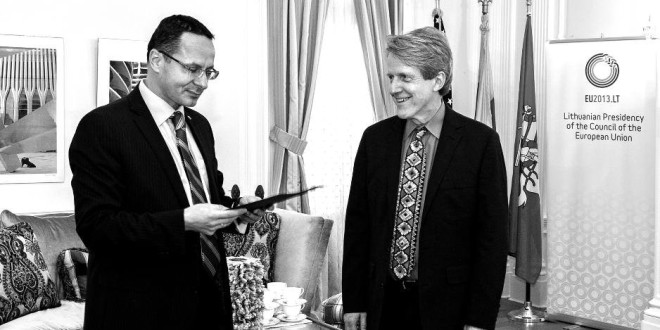 Yale University Professor, Robert J. Shiller, who is of Lithuanian descent, was one of the recipients of this year’s Nobel Memorial Prize in Economic Science. An economist, academic, and author of numerous popular books dealing with economics and finance, Shiller’s Lithuanian roots trace back to the 1800’s when Lithuania was ruled by the Russian Czar.

Robert James Shiller (born March 29, 1946) currently serves as a Sterling Professor of Economics at Yale University and is a fellow at the Yale School of Management’s International Center for Finance. Shiller has been a research associate of the National Bureau of Economic Research (NBER) since 1980, was Vice President of the American Economic Association in 2005, and President of the Eastern Economic Association for 2006-2007. He is also the cofounder and chief economist of the investment management firm MacroMarkets LLC. Shiller is ranked among the 100 most influential economists of the world.

In 1981 Robert Shiller published an article in The American Economic Review titled “Do stock prices move too much to be justified by subsequent changes in dividends?” in which he challenged the efficient-market hypothesis, which was the dominant view among economists at the time. Shiller concluded that the volatility of the stock market was greater than could plausibly be explained by any rational view of the future.

The behavioral finance school gained new credibility following the October 1987 stock market crash. Shiller’s work included survey research that asked investors and stock traders what motivated them to make trades; the results further bolstered his hypothesis that these decisions are often driven by emotion instead of rational calculations.

His book Irrational Exuberance (2000) – a New York Times bestseller – warned in March 2000 that the stock market growth had become a bubble (the very height of the market top) which could result in a sharp downturn.

In 2003 Shiller co-authored a Brookings Institution paper called “Is There a Bubble in the Housing Market?”. Shiller subsequently refined his position in the 2nd edition of Irrational Exuberance (2005), acknowledging that “further rises in the [stock and housing] markets could lead, eventually, to even more significant declines…

In September 2007, almost exactly one year before the collapse of Lehman Brothers, Shiller wrote an article in which he predicted an imminent collapse in the U.S. housing market, and subsequent financial panic.

His contributions on risk sharing, financial market volatility, bubbles and crises, have received widespread attention among academics, practitioners, and policymakers alike. In 2010, he was named by Foreign Policy magazine to its list of top global thinkers.

In 2011 he made the Bloomberg 50 most influential people in global finance. In 2012, Thomson Reuters named him a contender for that year’s Nobel Prize in Economics, citing his “pioneering contributions to financial market volatility and the dynamics of asset prices”.

On October 14, 2013, it was announced that Shiller had become a recipient of the 2013 Nobel Prize in Economics alongside Eugene Fama and Lars Peter Hansen “for their empirical analysis of asset prices”.

Shiller is married to Virginia Marie (Faulstich), a psychologist and has two sons – Ben (born 1982) and Derek (born 1985). But most importantly – as far as we are concerned – is that prof. Robert Shiller is a Lithuanian-American, whose maternal genealogy might very well date back to Barbora Radvilaitė.

Robert Shiller’s grandfather Vincas Radziwilas, son of Kazimeras Radziwil, was born February 16, 1877 at Rimšoniai near Pašvintinys, in the region of Šiauliai. After the unsuccessful Lithuanian revolt against the Czar in 1863, the use of the Latin alphabet was forbidden. It was replaced by the Russian Cyrillic script. All Lithuanian books were banned. It is probable that Vincas attended a Russian elementary school, but studied Lithuanian at home from books smuggled in from Lithuania Minor.

In 1900, Vincas took notice of Rosalia Šerys, a maidservant who came to work in his home. But there was no chance for marriage because Rosalia was viewed as lower class and too young for him.

Vincas frequently traveled. Visiting the United States, he studied at a designers’school in Cleveland. Returning to Lithuania he married a well-todo widow in Pašvitinys, who had a crippled son by a previous marriage. They had one daughter, Ellen. After the marriage they decided move to the United States. Vincas arrived first in 1907, with the intention of setting up a homestead. His wife and children were to follow. But, within one month, his wife died. His infant daughter Ellen was left under the care of an aunt and uncle in Lithuania.

Quite by chance, Vincas (now Vincent) met his first love, Rosalia Šerys, in the United States. She had come independently, unaware that he was living in the United States, nor that his wife had died. The two were married in Duquesne, Pennsylvania in 1910. They lived in Chicago where he worked making suits for Marshall Fields. With the advent of mass-produced suits, Vincent lost his job at Marshall Fields. He set up his own tailor shop in Chicago. For about a year during the war the family lived at Fort Sheridan, Illinois where he worked on soldiers’ uniforms. Around 1916, lured by a high paying ($5.00 a day) job at the Ford Motor Company, he came to Detroit. He did not like the job, however, and quit in less than a year. He then worked as a fitter and alterer for J. L. Hudsons, and then for Capper and Capper. In 1918 he set up his own clothing store (The Biruta Clothing Co.) in Oakwood, Michigan (now Detroit) on Oakwood Boulevard just west of the Detroit River Bridge.

The daughter, Ellen joined the family around 1920. During the war his uncle, Vincas Čepinskis (only six years older than he) was the Lithuanian diplomatic representative in London.

Vincas traveled to Lithuania in 1926 to visit his mother. The visit was apparently timed so that he arrived when the Social Democrat Party (of which his uncle Čepinskis was co-leader) had gained power in Lithuania through an election. The party was soon removed from power by a right-wing military coup, which established a dictatorship in Lithuania. Shortly after his return from Lithuania, he suffered shortness of breath, swollen legs, was ill for about a year and died in 1927.

The widowed Rosalia remarried in 1928 to Joseph Grigaitis, who worked for the U.S. Rubber Co. The children were not happy with the second marriage, he was rather ,,boorish” compared to their first father, but was nonetheless responsible and good-natured.

In 1938 their daughter Ruth (Birute) married Benjamin Peter Shiller whose son Robert would one day be a Nobel Prize winner.

Around 1940 Rosalia fell ill with diabetes, although it was not severe enough to require insulin. In 1956 they moved to the farm of their daughter, Mildred, in Washington, Michigan. The husband continued to work at U.S. Rubber Company and commuted 25 miles to work every day. He died around 1957, afterwards her son William moved in with her. She died in 1960 of kidney failure.

Upon learning about Prof. shiller’s Lithuanian background, i pursued obtaining an interview with him. Finally, with the help of several connections at Yale university, i was able to land the interview, which he graciously granted. .

I can not resist to ask – your mother’s maiden name is Radsville. Is she a descendant of the famous Lithuanian nobility – the Radziwills?

I grew up with the idea that we were descended from the family of Barbora Radvilaite, who became Queen of Poland. She, however, did not have surviving children, I believe.

If so, that might very well make you indirectly the first Nobel prize winner of royal blood?

What was it like growing up in an industrial center such as Detroit? Were you raised in an ethnic environment with Lithuanian traditions such as cuisine? Back then did you have any ties with the Lithuanian community?

We lived amidst a Lithuanian community. We went summers to Dainava, a Lithuanian resort near Detroit. I heard Lithuanian spoken around my house frequently, my parents spoke it, and especially when grandparents were around. But my father did not want me to learn Lithuanian, thinking that it is a small country, we are in America now, and there was no point in learning it. But still my mother taught me a little.

When did you realize that your call was to study economics?

At the University of Michigan.

What aspect of your profession is closest to heart? Teaching? Research? Publishing?

As I grow older, I find that teaching is getting more and more important. I now teach hundreds of students, and I have an online course that is free to the public. I have about 50,000 students signed up for my free online financial markets course at Coursera for February 2014. But, I miss the smaller classes where one can get to know the students well.

In 2011 you made the Bloomberg list of 50 most influential people in global finance. Now you’ve been bestowed the prestigious Nobel Prize in Economics. What price glory? Are you feeling pressure to keep us with this demanding international exposure?

I work very hard. My wife Virginia is telling me to slow down.

What is it like to be alongside Eugene Fama and Lars Peter Hansen?

They are great economists. I wrote an article about them which appeared in the October 26 edition of The New York Times.

Are they perhaps personal friends of yours?

Yes, I know them well.

What is your economic forecast for the United States in the next five years?

I think that it is likely that we will have another recession in the next five years, and that, even five years from now, we will not be back on trend. But we can still hope that won’t happen. If it does, our government will be less willing to pursue stimulus policy to rescue the economy.

The same general forecast there, though their economy looks even weaker.

Many people in Lithuania fear that the euro could be catastrophic if it will be replaced by the national currency litas. What is your opinion?

Ithink that the euro is of immense symbolic value. It is unfortunate it is tied up in with economic dislocations, but I think it should be retained if at all possible, for it promotes European unity.

By the way, have you ever visited Lithuania? If so, when and under what circumstances?

I have been there, first in 1974, later to visit with my mother, even later to give a talk at the European Humanities University in Vilnius.

And in closing, lets recreate the scenario of the famous phone call you received on Monday. Where were you at the time? Perhaps for a second did you consider it a crank call?

I was getting out of the shower at 6:30am, and was not dressed. I suspected at first that it might be a prank call, but very quickly I believed it, since they sounded very plausible, and one of them, Per Krusell, I had met before.

Who was the first one you told? Their reaction? Your family? And your students?

I woke my wife to tell her. Then I called my limo driver (who was supposed to pick me up after 7am) to cancel my trip.

Do you think that being a Nobel prize winner will change your life style?

For the past weeks it certainly has, it has been extremely hectic. After a while, I think it will settle down back to the way it always was.