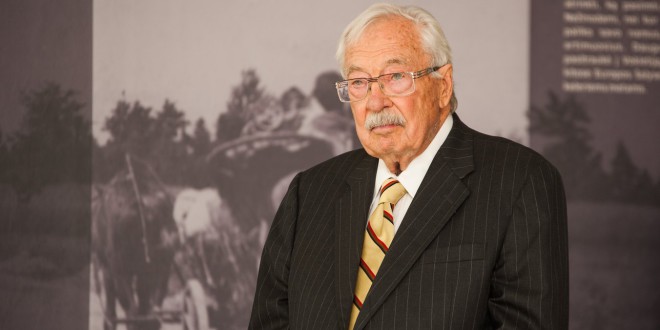 An Interview with Stanley Balzekas, Jr.

Please tell us something about your parents – when did they come to the States and where did they met?

My father (Stanley) arrived from Ukmergė, Lithuania in 1912 as a young man, and my mother (Emily) arrived from Panevėžys, Lithuania in 1905 as a small child with her parents. They did not know each other in Lithuania and later met in the Bridgeport area of Chicago. My father owned a butcher shop and my mother worked at Donnelly Shade Company. They were married in 1923; I was born in 1924. After WWII, my father sponsored 345 families to come to the United States.

What about your immediate family growing up in Chicago … were you active in Lithuanian organizations? Did you speak Lithuanian at home? Did you go to a Lithuanian school?

As an only child, I was active in many Lithuanian clubs and volunteered where needed. At home we spoke both Lithuanian and English. I grew up in Marquette Park at 6721 S Rockwell in Chicago and attended nearby Nativity BVM School until third grade. Then our family moved to the Beverly neighborhood at 9000 S Bell in Chicago; Nativity BVM was too far to go to, so I attended McKay grammar school. After WWII, I attended DePaul University and I received two degrees.

At what age did you get involved in your family business at the car dealership?

My father started the business in 1919. Memories of the auto dealership go back to when I was 10 years old, helping wherever I could. At 12 years of age I began to drive—moving cars around the lot as needed. I really enjoyed working with my father. We have been selling cars since 1919 and the Chrysler dealership was in our family since 1933 but was taken back by Chrysler in 2009 due to a massive reorganization that closed nearly 800 dealerships. Currently we no longer sell automobiles.

Dealerships were much easier to obtain in the old days—there were less rules and less territories. At various times we sold Saab, Pontiac, Avanti, Studebaker, Chevrolet, Pontiac, Chrysler, Nash, Hupmobile and Whippet.

We understand that you are a WWII veteran. Where did you serve? Were there any Lithuanians in your unit?

Shortly after graduating from Morgan Park Military Academy (1943), with bad eyesight I was drafted into the US Army, and attended Ft. Wolters Camp in Mineral Wells, TX (over 200,000 infantry man were trained here during WWII). My original assignment was that of scout—to go out and find where the enemy was—and as I like to joke … “I went out there looking for the enemy and when they started shooting at me, I found them!”

I arrived at Omaha beach with my M1 rifle three weeks after D-Day (6 June 1944). Heavy equipment and troops were still pouring in, and I was assigned to the 28th ID (Infantry Division) as a replacement.

After some short battles within the hedgerows in France, the 28th ID began the 420-mile march to Germany. On a good day with no distractions an ID could march about 20–25 miles. We marched through an already liberated Paris under the famed Arc De Triomphe. I still remember all the Parisians coming out to great us, offering us wine, eggs and cheese, similar to what you may have seen in historical movies. Most of the soldiers wanted to stop in Paris for a while, but there was no stopping as there was a war to win.

To get inside Germany and to the industrial heartland we had to cross the Siegfried line, which was a massive barrier built along the entire western border of Germany. Per historical records, the 28th ID crossed the Siegfried line at St. Vith.

Our big battle was the Battle of the Huertgen Forest, an 80-square mile, heavily wooded, very hilly forest in Western Germany. This was the longest battle in Europe, lasting from mid-September to mid-December 1944. There were not too many causalities in our march from Normandy to Germany as we had tanks and air power covering us. Once in the forest these two key advantages were gone—the terrain was too hilly and tree-laden for tanks, and airplanes could not see what target to bomb due to the constant rain and clouds. Seldom were gains made of more than 100 yards within the heavy forest. There were over 33,000 US casualties in the Huertgen Forest. This number represents just over 8% of all US soldiers killed worldwide in WWII. I did receive the Bronze Star for rescuing 12 wounded soldiers from the front line. I also received a Purple Heart.

I was part of a team of about 40 that was assigned a special missionfind and rescue General George Patton’s son-in-law who had been captured and was being held an estimated 15 miles behind the enemy line. This was to be an at-night “in and out” rescue operation. My job was to lob the grenade. We actually did find him, but he was well secured on the second floor of a building, and a rescue was not possible, and the mission was aborted based on the feeling that if we attacked, the son-in-law would probably be killed.

In January 1945 I was captured as a Prisoner of War (POW) near Saint Markt Pongau and sent to a German prison camp of about 2,500. We were fortunate that the International Red Cross was able to visit us, which gave us a great deal of hope. We were even allowed to take college classes for credit while in captivity.

VE (Victory Europe) day was 8 May 1945, and the War in Europe ended and within two weeks my captivity ended. I underwent rehab in Miami for three months, and then helped discharge solders at Ft. Sheridan north of Chicago for another three months. After that, I was honorably discharged. I did have trouble putting weight on after the POW ex-perience and my doctor said to drink a beer with each dinner – soon my weight went to 185 pounds and my new mission, per my doctor, was to lose the extra weight!

I did meet one other Lithuanian in my unit from Pennsylvania but unfortunately, we did not keep track of each other.

All US military (Active Duty and Reserve) who served from 7 December 1941 through 31 December 1946 received the US Victory Medal.  I am very proud of this medal as it represents our combined efforts to win the War.

You might want to tell your readers that every person who ever served in the US military (living or deceased)—they, or their next-of-kin can request a copy of their relative’s military records at no charge. One can research a veteran from the following two web addresses:

What are the goals of the Balzekas Museum of Lithuanian Culture, which began in 1966? Were there any other major players in this project?

The museum originally had two goals: 1) The preservation and perpetuation of Lithuanian customs and traditions, and 2) Help advance the cause for Lithuanian Independence and bring Lithuania’s political situation to the world’s attention. As Lithuania is now a free country, the second goal has been modified to get non-Lithuanians to recognize and appreciate the importance of Lithuanian freedom.

My late wife Irene, mother and father were very helpful in getting the museum started. They provided the inspiration to begin the museum. Irene formulated plans and did much of the startup work in the early days. The museum may not have happened without Irene’s support and that of the community and friends. The museum’s original location was 4012 S Archer Ave in Chicago. We outgrew that location, and moved to our present address of 6500 S Pulaski in 1986. Our current building used to be the Von Solbrig Hospital.

This year we are celebrating the Museum’s 50th anniversary of which we are very proud! We host at least five events each month. Toward the end of the year, we honor the “Person of the Year” who is a well-known figure who supports Lithuania and the cause for Lithuanian freedom. Twice per year, we have 10-day tours to Lithuania, complete with an English-speaking guide. A detailed itinerary is listed on our website http://www.balzekasmuseum.org. Other events include visiting artists, book readings, Easter egg decorating, children’s museum activities and genealogy. We have a “must see” highly acclaimed exhibit ongoing through the end of the year, “No Home to Go To—The Story of Baltic Displaced Persons 1944–1952.” We are on Facebook, and we publish a magazine (The Lithuanian Museum Review) four times per year. We have the largest library and archives of Lithuanian books outside of Lithuania. We have an outstanding gift shop that sells a wide variety of Lithuanian items (jewelry, books, clothing, crystal and glass items, amber, etc.) Many of these items are imported from Lithuania. We are open every day of the year, except Christmas and Easter.

In 2010, we honored US Senator Richard C. Durbin (his mother is Lithuanian – Anna (née Kutkin; Lithuanian: Ona Kutkaitė). I recall him joking, “When I retire from the US Senate, I would like to get Stanley’s job … Lithuanian Ambassador to Palm Beach!” and the crowd laughed. Other attendees at various times at the museum have included President Valdas Adamkus, Vytautas Landsbergis, TV movie star Ruta Lee, and football legend Dick Butkus.

Are any of your children or grandchildren taking an active role in the museum?

I have three children and six grandchildren, and they all are involved in the museum. The museum is where I spend most of my time.

Stanley you have accomplished a great deal. Do you have any tips for success you would like to pass along? Were there any other organizations you were a member of?

As a young man in my 20s, my father told me, “Always do something faster and better than anyone else.” I enjoy talking to people and working with them.

I was on the Board of Trustees of the Chicago Public Library for 11 years and worked with four Chicago mayors – Richard J. Daley (he swore me in), Michael Bilandic, Jayne Byrne and Harold Washington. I also served on the Chicago Commission for Human Relations for 20 years.

Do you have any final thoughts that we have not discussed yet?

Well, you should know that we are always looking for new ideas, new programs and advice for the museum, as well as more volunteers. Please join us in celebrating our 50th anniversary!