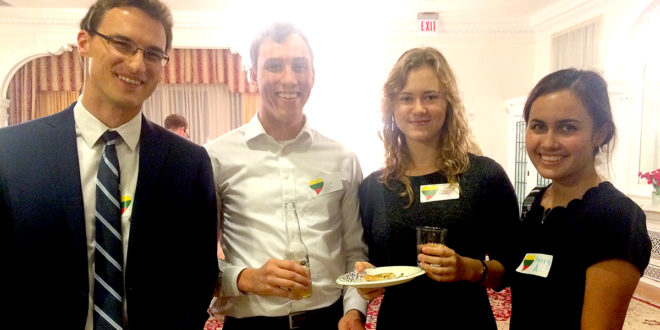 MEETING AT THE EMBASSY

More than two decades after the fall of the Soviet Union, Baltic unity is still strong in the Nation’s Capital. On October 30th, dozens of Baltic Americans met at the Lithuanian Embassy to discuss issues of concern to the American Baltic community and how to respond to current challenges to Baltic freedom.

Gathered at the historic Embassy of the Republic of Lithuania, conference participants could not help but sense the significance of the issues under review.  Photographs and mementos from the 1980s protests were on display. Newspapers from those years were also exhibited on the table in the main dining room.  These walls had witnessed some of Lithuania’s most triumphant moments, as well as its darkest years.  Today, the embassy stands firm as a monument to Lithuania’s resilience (and that of all the Baltic countries) — a testimonial to the importance of diplomacy and civic action.

The attendees included young professionals and students.    Some worked in public policy positions and suggested approaches to engage policymakers on Baltic issues.  Staying informed, conversant, and outspoken in Baltic matters were necessary preconditions to present our cause effectively.

The session moderated by Jonas Howes, a Washington, D.C. attorney and special projects Director of the Lithuanian-American Community. [It ought to be noted that Jonas Howes is continuing a proud family tradition in that his grandfather, Juozas B. Laucka, was instrumental together with his friend Leonard Simutis, in the 1940 formation of the Lithuanian American Council, which at that time successfully unified all the principal Lithuanian American organizations in promoting the cause of Baltic freedom.  He was also part of the historic Lithuanian American Council delegation which was received by Pres. Roosevelt in 1940 where the foundation was laid for the long-standing non-recognition policy of the Soviet annexation of the Baltic States.]

The session advanced to a discussion on current Russian aggressive moves. Among these were Russia’s recently conducted ZAPAD exercises on Lithuania’s border.  Unlike defensive drills that many countries regularly carry out, these maneuvers were offensive, acting out a prospective invasion of neighboring countries.  The Russian and Belarusian forces war-gamed an attack on fictitious states that were remarkably similar to Poland, Lithuania, Latvia, and Estonia.  Russia has claimed that ZAPAD involved 12,700 troops, 70 aircraft, and 680 armored vehicles; however, the actual figure has yet to be determined.  Russia conducted similar exercises in 2013 and publicly claimed that they involved some 12,000 troops; however, NATO sources estimated at that time that they totaled about 90,000.  The 2013 exercises were notable in that many Russian forces quietly left their weapons behind; a few months later, Russia annexed Crimea.

The participants then exchanged concerns over the change in Russia’s relations with the Baltic countires and the United States over the past five years, leading to Russian-backed efforts to hack and spread misinformation during the 2016 U.S. Presidential election.  The Baltic States have suffered from similar efforts in recent years as Russia has sought to destabilize Western countries, particularly NATO members.

Representatives from the Joint Baltic American National Committee (JBANC) representing the Lithuanian American Council, the American Latvian Association,  and the Estonian American National Council made a presentation on its Washington-based information services as did the West Coast-based Baltic American Freedom League (BAFL) which described its activities and priorities.  Others noted the relevant activities of Central and East European Coalition (CEEC) and Center for European Policy Analysis (CEPA).  There was a consensus on the need to share information and coordinate strategies in the defense of Baltic sovereignty.

Participants emphasized the importance of maintaining U.S. funding for NATO and pro-democracy efforts in the Baltic States to counter aggressive, misinformation and propaganda campaigns.  They concluded that the most productive way of doing so was by directly engaging face-to-face with members of Congress.  They also discussed calling House and Senate offices, and, because many live in the D.C. area, visiting those officials in person.