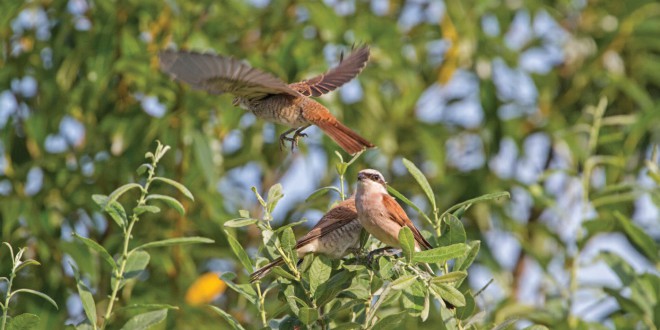 Birding the Wetlands of Kaunas

It is late August 2014 and time to make our yearly pilgrimage to Lithuania to spend some quality time with my wife’s family in Kaunas. We have made the trip every year for the past seven years, ever since my wife and I met whilst studying at the Guildhall School of Music and Drama in London. The journey is even more important now that we have a 2-year old son with Lithuanian relatives just waiting to spoil him.

These trips also offer me the chance to indulge in my passion for bird watching. I take every opportunity I can to grab my binoculars and head for the nearest patch of wilderness in search of new and exciting birds.

In Great Britain we have our fair share of bird species, but, in general, Lithuania has so much more to offer. The large areas of mature woodland, the extensive network of rivers and lakes and the lack of intensive farming methods all mean that Lithuania is an ideal home and stopping-off point for a huge variety of bird species.

Birds such as the Red-backed Shrike (Lanius collurio [paprastoji medšarkė]) and the once common Turtle Dove (Streptopelia turtur [paprastasis purplelis]) have become increasingly rare sights in Britain, due to the pressures placed upon the countryside by an ever increasing human population, and yet both species are still relatively common throughout the Baltic states. And there is also the thrill of spotting a bird not found in the U.K., such as the Nutcracker (Nucifraga caryocatactes [riešutinė]) or Lithuania’s national bird—the White Stork (Ciconia ciconia [baltasis gandras]).

On this particular trip I decided to seek out a local guide to help me find some of the species that have so far eluded me. I googled the words “Kaunas AND Bird Watching” and came across the name Boris Belchev, a wildlife photographer and guide living just outside Kaunas. After a quick exchange of emails, Boris agreed to take me on a “whistle stop” tour of the hottest bird watching spots in the area. I could hardly wait!

When the day of our big adventure finally arrives, I meet Boris at 6 a.m. in a lay-by on the outskirts of Kaunas. I get into his car, and, other than the words, “Good morning. Nice to meet you!” very little is said. This is the first time we have actually laid eyes on each other, and there is a degree of apprehension on both our parts.

In near silence we make our way to the meeting point of the Neris and Nemunas Rivers, but there is little to see. The water level has risen since Boris was last at this spot, and the sandbars that birds like to congregate on are all under water. As we get back in the car, our hearts heavy with disappointment, my phone beeps, and there is a message from my wife checking to make sure I haven’t been murdered by my guide. I share this information with Boris, and we both have a good laugh; at last the ice is broken!

As we head out of Kaunas, Boris asks me which birds I would really like to see during our trip. The answer is easy! There are two species that I have looked for, ever since my first visit to Lithuania, but without success: the Common Crane (Grus grus [pilkoji gervė]) and the Whitetailed Eagle (Haliaeetus albicilla [jūrinis erelis]). With a smile on his face, Boris tells me that, as luck would have it, our next stop just happens to be the best place in the whole country to see Common Cranes— the marshland of Novaraištis.

About 30 minutes out from Kaunas we turn onto a heavily rutted track that leads us into a stretch of dense pine forest. The road twists and turns until finally the trees begin to thin out, and we find ourselves at the foot of what appears to be an old electricity pylon. Upon closer inspection I realize that the structure is actually a 20 meter high viewing platform made from a series of ladders supported by a scaffold frame.

We begin the climb and I am thankful that Boris insisted I bring a good coat along with me as the earlymorning breeze has a taste of winter’s chill about it, despite the glorious clear blue sky. About five meters from the top of the platform, I hear what can only be described as a 1920s traffic jam somewhere on the far side of the marsh. The “Honk! Honk! Honk!” of hundreds of antiquated car horns blasting away in the middle of the wilderness. And then it hits me—not cars but cranes! I rush to the top of the tower, and there they are, over 300 Common Cranes greeting the dawn with their trumpeting calls. As the sun rises steadily over the distant treetops, the cranes take to the skies in wave after wave of ungainly gracefulness. I become more and more absorbed in the spectacle that is unfolding before me, and a feeling of absolute peace envelopes my being. To witness such a spectacular event creates an immediate connection with the natural world, and a realization that the world we humans have created for ourselves is so utterly artificial and divorced from “Mother Nature.”

Without warning the energy changes completely. Birds that have been smoothly riding the thermals are suddenly dropping from the sky, twisting this way and that as they desperately flap their wings to try and regain control of their descent. And then there she is! A massive, female, White-tailed Eagle, with a wingspan over two meters, diving through the flocks of cranes and causing complete pandemonium in the hope of snatching some breakfast. For several minutes I watch, heart in mouth, as the eagle swoops and turns with astounding agility in an attempt to isolate its prey but without success. And then it is over. The cranes are safely hidden in the reeds and the eagle casually glides across the marsh into a stretch of woodland.

As the cranes begin their trumpeting once more, Boris and I return to the car and set off for our next location. My thoughts are still very much with the cranes when Boris suddenly slams on the brakes and points into the distance. Flying between the scattered pine trees, making its plaintive call, is Europe’s largest woodpecker, (Dryocopus martius [juodoji meleta]) the Black Woodpecker. This is only my second sighting of this majestic bird—could my day get any better.

What happens next is a 400 km drive through the Lithuanian countryside checking out every one of Boris’ birding hotspots. My guide is desperate to gain access to a set of fishponds where he has heard that a pair of Black-necked Grebes (Podiceps nigricollis[juodakaklis kragas]) are hanging out, but after several phone calls, he is told that the ponds are off-limits. Fortunately for me, Boris knows of a dirt track that skirts the ponds, and before too long we are able to add the grebes to our sightings. Even more surprising is the sight of a pair of Whooper Swans (Cygnus cygnus [gulbė giesmininkė]) gracefully gliding across the surface of one of the ponds. This species usually breeds only in the far north of Europe, but Boris reliably informs me that thereis a small breeding population in Lithuania—well that’s news to me!

We spend the next couple of hours navigating our way between the numerous fishponds that litter the central Lithuanian countryside and have some great views of Great White Egrets (Ardea alba, [baltasis garnys]) and Marsh Harriers (Circus aeruginosus [nendrinė lingė]). Boris suddenly realizes that we are only 50 km away from Žuvintas Lake, the site of Lithuania’s oldest nature reserve, and we decide to give it a try.

We take to the road once more, and I notice that Boris seems to be paying particularly close attention to the telephone lines running parallel to the road. “I’m looking for a Redfooted Falcon (Falcovespertinus [raudonkojis sakalas]),” he tells me. I think he is pulling my leg, but apparently a friend of his had spotted one a few days earlier. With renewed vigor I scan the passing countryside and before long we are in luck! Not the sought after Red-footed Falcon, but another of Europe’s rarer birds of prey, a male Montagu’s Harrier (Circus pygargus [pievinė lingė]) hunting over a patch of lush green pasture. This is another first for me. I really can’t believe my luck—three new species to add to my “life list,” and we are only halfway through the day.

Eventually we pull into the car park at the Žuvintas Lake nature reserve, and I am immediately reminded of many of the RSPB (Royal Society for the Protection of Birds) reserves dotted around the British Isles. A series of lakes surrounded by dense reed beds, providing ideal habitat for a multitude of bird species. We make our way towards the reserve’s viewing tower, but, before we reach it, Boris’ ears pick up the song of another rarity in the U.K., a Penduline Tit (Remiz pendulinus [remeza]). We search the reed beds for several minutes without success, and so Boris grabs his mobile phone and uses it to play a recording of the Penduline Tit’s call. Sure enough, there is some movement low down among the reeds, and then a curious Penduline Tit appears right next to me, quickly followed by several others—amazing!

When we reach the tower, a strong, chilly breeze has driven many of the birds onto the far shore. It is hard to pick out the individual species at such a distance, but, with the help of Boris’ telescope, we are able to add a few ducks and waders to our list. Before too long dark storm clouds begin to gather, and heavy showers can be seen sweeping across the countryside as the wind intensifies. We decide to head for home and make it to the car just before the rain has a chance to give us a good soaking.

On the return journey there is plenty of time to reflect upon our adventure. To reach a total of 93 species, five of which are firsts for me, is a tremendous effort and certainly one of my best bird watching experiences to date. The sheer abundance of birdlife in such a small country is staggering and a true testament to the diversity of habitats that make Lithuania so attractive to our avian friends. So whether you are a visitor to this country or a native, take a moment to explore the rich and varied wildlife that is on your doorstep. I promise you that you will not be disappointed!