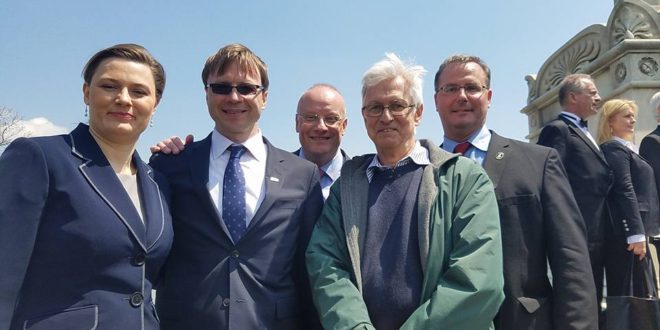 The United States Military Academy at West Point, New York, hosted a two-day conference commemorating the centennial of the ending of the First World I. Nine scholars presented various aspects of the end of hostilities related explicitly to Eastern Europe. Other than myself and a U.S. army officer, all the presenters were Polish, so I had the seemingly unenviable task of presenting the Lithuanian perspective. Most of the lectures dealt with Polish domestic and foreign politics as Poland emerged from the ashes of the war.

One may ask why the focus on Poland. The meeting was the Fifteenth Annual Tadeusz Kościuszko Conference sponsored by the American Association of the Friends of Kościuszko at West Point (AAFKWP). [I will henceforth use the Lithuanian spelling — Tadas Koščiuška]. This organization seeks to maintain Koščiuška’s memory at West Point. He was first honored there on July 4, 1828, when the pedestal and column of the Koščiuška Monument were unveiled. This is the world’s oldest memorial to Tadas Koščiuška, other than the artificial Koščiuška Mound (Kopiec Kościuszki in Polish) located in Kraków, Poland, which was completed in 1823.

Tadas Koščiuška was born in 1746 in Lithuania and died October 15, 1817. He was a military leader, combat engineer, and statesman, who became a national hero in Poland, Lithuania, Belarus, and the U.S. Koščiuška fought in the Lithuanian-Polish Commonwealth’s struggles against Russia and Prussia, and on the U.S. side in the American Revolutionary War. An accomplished military architect, he designed and oversaw the construction of state-of-the-art fortifications, including those at West Point, NY. In 1783, in recognition of his services, the Continental Congress promoted him to brigadier general. As Supreme Commander of Lithuanian and Polish armed forces, he led the 1794  uprising against Prussian and Russian troops.

The Koščiuška Monument in West Point is located on the site of Fort Clinton, one of the defensive forts Koščiuška designed and commanded overlooking the Hudson River. These artillery batteries and those of Constitution Island were deployed to confront British warships sailing up the river. Britain’s objective was to control the waterway, thereby separating the New England colonies from New York and the middle-Atlantic colonies, and thus undermining the American Revolution.

West Point’s defensive array included a great chain submerged just beneath the surface of the Hudson River. It brought the British ships to a full stop, allowing West Point’s artillery batteries on the shore and heights to lay devastating fire on them. The British were never able to control the Hudson River because of Koščiuška’s splendid fortifications that later earned West Point its sobriquet of “America’s Gibraltar.”

The conference was opened on April 27 by Anthony Bajdek, president of the AAFKWP. He introduced Lt. Gen. Robert Caslen, superintendent of the U.S. Military Academy, who was an active participant in the proceedings. AAFKWP Executive Vice President Stephen Olejasz, a retired US Army officer and former professor at the Academy, provided an overview of the redrawing of the map of Europe at the conclusion of World War I. Presenters represented Northeastern University, Central Connecticut State University, Jagiellonian University, Saint Anselm College, Purdue University, and the Academy. Topics included Polish-American diplomatic contacts, leaders in the Polish independence movement, Poland’s relations with other European countries, and the origins of Poland’s air force.

My presentation was entitled “A Twentieth Century Miracle: Lithuania’s Transition from World War I to Independence.” The lecture covered the efforts of key Lithuanian political and military leaders to create state administrative organs while foreign military forces continued in Lithuania. I recounted details of Lithuania’s battles against the Germans, Bermontians, Russian Bolsheviks, and the Poles. My speech provoked a discussion with a predominantly Polish audience about the Lithuanian-Polish conflicts in 1919 and 1920. The exchanges were frank and candid and conducted in a scholarly and positive manner. Although Lithuania and Poland were enemies a century ago,  today the two nations are close political and military allies with shared objectives. A strong alliance of these two independent and democratic  Central European states is necessary for maintaining continental peace and stability.

The following day, April 28, began with a Mass at the Cadet Chapel of the Most Holy Trinity at West Point. Lithuania’s Ambassador to the United States, Rolandas Kriščiūnas, and Deputy Chief of Mission at Poland’s embassy in Washington Pawel Kotowski participated along with conference attendees, visitors, army officers, and cadets. Following the Mass, General Caslen invited conference participants to view the weekly cadet parade from the superintendent’s box. The ceremony and pass-in review in full traditional uniform is an impressive and colorful tradition at the Academy. The vista of the cadets on the plain with West Point’s historic buildings on the bluffs overlooking the Hudson River was memorable. It is also inspirational knowing that these young people have volunteered to serve our country as Army officers while American forces are still in harm’s way overseas. We also experienced a special treat when Army parachutists jumped from a helicopter and smoothly floated to a landing on the plain before us.

We then walked a short distance to the Koščiuška Monument where Ambassador Kriščiūnas and Minister Kotowski laid a wreath. Kristina Malinauskaitė, a professional soloist from New York City, sang the Lithuanian National Anthem. Ambassador Kriščiūnas remarked on the close ties of the Lithuanian and Polish people and how both countries recognize Koščiuška as a hero. U.S. Military Academy cadets fired a salute to this native of Central Europe who helped the United States win her independence. The two-day conference concluded with a luncheon, conviviality and a pledge to continue scholarly research on our respective countries.

Although it was a Polish-centric event, I was made to feel welcome. I am pleased that Lithuania was included in the program and that the Lithuanian ambassador was an honored guest. While a few Lithuanians traveled from the New York City area for the second day’s commemoration, I am confident that our Polish friends would welcome a larger Lithuanian contingent at future annual conferences.

Robertas Vitas, Ph.D. is Chairman of the Board of the Lithuanian Research and Studies Center.