Home - History-1900+ - Folklore: the Ghosts of Trakai Castle: Stories of the Castle Watchman 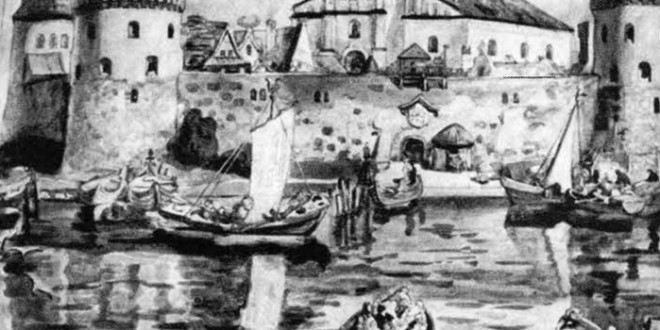 Trakai in the time of Vytautas the Great (detail of painting by J. Kamarauskas).

Folklore: the Ghosts of Trakai Castle: Stories of the Castle Watchman

Stories of the Castle Watchman

I WAS BORN AND GREW UP IN an old Karaite house which had been bought and repaired by my father. The house stood between the lakes Totoriškiu and Galve opposite Trakai Castle. Later on, the local authorities tore down the house and instead of it they built a big restaurant called “Nendre” (“The Reed” in English). My father, Antanas, all his life worked as a watchman at the castle. On his free time father was occupied by housekeeping and he managed to perform various other jobs. In fact, he was a master of all jobs. He repaired shoes, sewed clothes, restored furniture and performed carpentry work. If he needed a helmet for riding a motorcycle, he made it himself by taking an aluminum pan as a base which he bought in the store. Could you only imagine the face of the store clerk when father tried on the pot on his head!

During World War II father was captured by the Nazis but managed to run away and return home. After the war, in spite of the hard times and the priority given to the communist holidays, mother arranged celebrations for Christmas and Easter. Only intimate friends came to celebrate those holidays during which they remembered various stories, and good and bad omens from the past. Father usually told about ghosts which he had met in the castle. 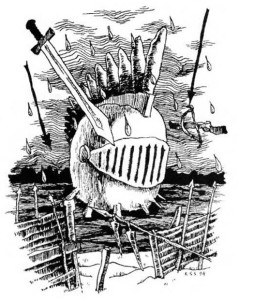 Now there is special security in the castle, but during my father’s life there were only two watchmen who were on duty 24 hours each in turn. The usual place for the watchmen to stay at night was the castle’s Grand Hall of Vytautas the Great. But if the watchman heard some suspicious sounds or noises, he would come out from the castle into the courtyard and walk around the castle grounds to make sure everything was in order. According to my father, ghosts appeared to him because he wasn’t afraid of them. His stories were so convincing that it was impossible not to believe him.

Once, on a summer evening the sky was covered with dark clouds and the wind became strong. It also began to rain. Antanas heard some creaks and grinding in the castle courtyard. He came out into the yard and saw that the gates to the yard were open, that they were creaking loudly. He was greatly surprised at what he saw because he remembered quite well that he had closed and locked the gates. He had a feeling of uneasiness in his heart and decided to also check the main entrance gates to the castle. Coming to those gates, he saw that they were also open and the wind swung them from one side to the other. Antanas felt disturbed because he remembered locking all the gates. There was no reason to leave the gates open for the entire night. He took the key out of his pocket, put it into the keyhole and tried to lock the gates. But something didn’t seem right to him. He lifted his head, and in front of him on the foaming waves he saw a white fluorescence. He came out of the castle in order to see better and walked to the very shore. There he was struck by terror.

The white fluorescence slowly changed into a giant head of a knight enclosed in a helmet. The head didn’t float on the dark waves of the lake but seemed to be suspended above them. Antanas tried to turn and run back, but his legs didn’t move. It was as if they were tied to the ground. And then he saw another fluorescence. It was a white column of light coming out of the southwestern tower of the castle. In this light he could clearly make out the outline of another knight. In place of the face, the knight had a white blank spot. He wore a long garment and held a raised sword pointing in the direction of the lake. “It must be Grand Duke Vytautas,” figured Antanas because he had seen a similar image at the exhibition of the castle’s museum. But the column of light started to fade and the figure of the knight very gracefully and slowly descended on the defensive wall, then on the ground, and finally passed through the gates into the castle. Gradually the terror, by which the watchman had been taken, disappeared somewhat and curiosity took the upper hand. He decided to follow the apparition.

Antanas saw that the figure of Vytautas passed slowly into one of the openings of the same tower and disappeared. He didn’t have enough courage to follow the ghost into the tower. Suddenly he felt very sleepy. He could hardly reach the Grand Hall, his usual place of stay, when he fell asleep in the wet raincoat which he hadn’t taken off.

At dawn Antanas was awakened by noises and knocking coming from the yard. The cleaners had arrived with their buckets and brooms to tidy up the castle, he thought. But how did they enter the castle if all the gates were locked? Then he remembered what had happened the night before. At first he dismissed it all as only a dream, but the wet raincoat told him otherwise. The watchman made up his mind to go to the yard and look around the southwestern tower. The storm had calmed down and the rain had stopped. There were puddles on the ground and the sky was bright and blue and the sun was shining gently. There was nothing special inside the tower, there were no signs of the strange events of the previous night. The gates were unlocked as he had left them, and the key was still in the lock. This made it easy for the cleaners to get in, Antanas reasoned.

The watchman went up to the lake’s shore. The water of the lake was a bit waved and there were white foams in the distance resembling heads of knights. As he turned to go back, suddenly Antanas saw a familiar thing in the reeds. It was his cap which he somehow must have dropped the night before in the dense of the reeds. The cap was all wet and Antanas put it into the pocket of his raincoat.

This was the only time in his life that Antanas saw the hovering head of the knight over the water. A fellow worker also saw the head once during a storm. But to Antanas, once in a lifetime was enough. He thought that perhaps Grand Duke Vytautas had beheaded his greatest enemy, a crusader knight, and had thrown his head into the waters of Lake Galve. T hat’s why the lake is named Galve (“The Head”). And the knight’s head, as if seeking revenge, emerges menacing from the bottom of the lake during a storm and faces the castle.

The watchman saw the Grand Duke’s ghost several other times. Once it was in autumn when a thick fog covered the lake and engulfed the castle. Vytautas again appeared in a column of light above the southwestern tower, gracefully landed on the ground, hovered through the gates which appeared not to be locked, and slowly disappeared into the same tower. It is said that Vytautas’ ghost was seen above the tower not only by Antanas, but also by other residents of Trakai. So the legend was born that if in a bright full-moon night you sat on the other shore of the lake, opposite the castle, you might see Grand Duke Vytautas over the tower before dawn. One who is lucky enough to see the Grand Duke’s ghost will have good luck throughout the year.

Antanas was certain that under that southwestern tower there was the entrance (or exit) of a long underground tunnel which connected T rakai Castle with the Vilnius castles. And it was there that Vytautas’ ghost disappeared. Antanas believed in the existence of this tunnel which his grandfather had told him about. And in the 1960s and ‘70s this legend was very popular. I remember that scientists denied the existence of the tunnel because it was not logically feasible. In reality the existence of such a tunnel seems to be fantastic.

Galve is the largest, deepest, and the most beautiful lake of Trakai. It has many islands and places which are full of legends, myths, and a rich history.

Antanas used to tell that often at midnight in autumn one could hear heart-breaking weeping from the direction where two of the castle’s neighboring islands were located. I remembered this story when I worked as a tourist guide in the castle. I learned that the two islands are called “Pirties” (“Bathhouse”) and “Raudines” (“Weeping”). People not only bathed themselves on “Pirties” island, but also executed judgements there. A punished person often screamed before execution, and his family who was gathered on the other island, “Raudines,” wept and mourned his destiny.

Antanas was especially interested in another island, which was so mysterious and enigmatic that he believed something unusual must happen on it. Several times late at night, the watchman would see flickering lights there. Once, during the day, he went by boat to the island. He found nothing but the remains of the foundations of an unknown structure. The place was overgrown by bushes and vegetation. As I’ve learned later, the small island is called “Koplytele” (“The Chapel”). A small chapel was built on this island in the 16th century in which members of the famous Sapiega family of magnates were buried.

Locals call another island in Lake Galve by a rather strange name: “Daryk, ka nori” (“Do whatever you want”), and they are in high spirits saying so.

The past of the other islands is clouded in mystery. It is known that local people used them according to their needs: for planting vegetables, grazing cattle, making nets. They raked the falling leaves in autumn and covered the floors of their cattle-sheds with them.

My father Antanas was very fond of Lake Galve. He used to fish in it, visit various islands, or just rest on its shores. He worked as the castle watchman up until his death. I decided to write his wonderful stories down because I believe that an ancient castle cannot exist without secrets and ghosts.

Previous Some Lithuanian Favorites
Next Lithuanian Profiles: the Darius and Girėnas Mystery