Home - Sports - The Sporting Life: the Unsurpassable Johnny U.

The Sporting Life: the Unsurpassable Johnny U.

November 15, 1997 Sports Comments Off on The Sporting Life: the Unsurpassable Johnny U. 1,682 Views

A generation after his football exploits, star quarterback Johnny Unitas remains a source of Lithuanian pride and inspiration.

Michael Jordan doesn’t realize this yet. But twenty five years after he retires, mention of his name is going to evoke mainly blank looks from the offspring of the kids wearing his basketball jersey replicas today. It’s happened to the best and the rest, in sports and out. Ruth, Franklin D. Roosevelt, the Beatles. 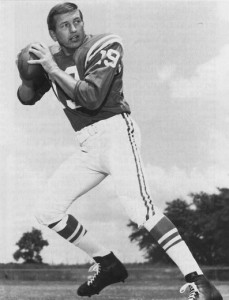 And so it’s been for football quarterback legend Johnny Unitas (Jonaitis). Twenty five years after his last game for the Baltimore (now Indianapolis) Colts, John’s memory has largely been distilled to a few glorious facts. O n a career spanning 1956 through 1973, all but the latter with Baltimore, Unitas completed almost 3,000 of 5,000 passes for over 40,000 yards and 290 touchdowns. All were National Football League records when he quit. Adjusting a reasonable 25% for today’s longer season and more relaxed passing rules, everyone could easily still be aiming for his lifetime marks. His five season, 47 consecutive game string with at least one touchdown pass is a record that may never be broken.

Further, John led Baltimore to three NFL Championships. The first was via 1958’s famous 23-17 sudden death overtime title contest versus the New York Giants. Experts often credit this game with sparking the interest which fueled the league’s phenomenal 1960’s growth. The Colts have honored him by retiring his uniform number, the NFL by enshrining him in its Hall of Fame. On the college level, his alma mater named a dormitory for him, and they annually present the Johnny U nitas T rophy to the year’s best NCAA quarterback. The ethnic press has contributed to his legend, too, despite a fundamental problem. “They don’t have a word in Lithuanian for ‘touchdown’”, one sportswriter wryly noted, after producing a Unitas feature for a Chicago-based Lithuanian daily some time back.

Interestingly, Unitas experienced progressively greater successes as he climbed the competitive ladder from high school to college to professional. Growing up in a non-Lithuanian neighborhood in Pittsburgh, he was All-Catholic League as a high school senior at little St. Justin’s. Commendable, but hardly promising an alltime great. The major college recruiters ignored him, primarily because of his 5’11”, 140 pound size. By rule of thumb, this is two pounds underweight for marathon running, to say nothing of football. He claims to have feasted on his mother’s Lithuanian cuisine, but one wonders.

Unitas would eventually grow to 6’1”, 196 pounds at Louisville, the only school to offer a scholarship. He lettered all four seasons there and captained the 1954 squad as a senior. His shining hour, though, may have come as a freshman when he threw four touchdown passes in a 35-28 upset victory over Houston. More often, unfortunately, John and the Cardinals took poundings like 59-6 from national powers such as Tennessee. The team was only 12-22 during his tenure; few of his teammates were professional prospects.

It was the kind of “wrong place, wrong time” luck that’s buried many gifted athletes. Indeed, it almost buried Unitas. He was selected down in the ninth round of the NFL draft by the Pittsburgh Steelers. This is never a favorable sign, and in the days of 33 man NFL rosters it was worse. The Steelers dismissed him at their summer training camp. “It’d be different if I screwed up, but you never even gave me a chance,” he later recalled telling a team official, coming as close as he ever would to losing his trademark unshakeable composure. O f the three quarterbacks the Steelers valued more,only Jim Finks is remembered today. And that’s for abilities he subsequently displayed as a sports executive.

Already a husband and an expectant father, John found work in construction and indulged his love for the game playing off hours for a local semiprofessional team for $6 a game in the fall of 1955. An impressed spectator alerted the Baltimore Colts, and with perhaps the most famous phone call in football history, a tryout was arranged for the spring o f’56. Based on the results, the Colts hired Unitas to back up starter George Shaw in the upcoming season.

His luck had begun to turn. It came around completely when Shaw, talented but injury-prone, went down in game four against the Chicago Bears. Unitas replaced him, and Shaw never got his starting job back. Two years later the football world was toasting Johnny U.’s performance in the sudden death game, in which he passed for a title game individual record 361 yards. Distinctions we’ve only touched the surface of listing followed. Dramatically, however, this was the pinnacle of his career; if not in fact his life.

During and subsequent to his playing days, he’s headed up bowling alleys, a hotel, a restaurant, investment and real estate firms, and served as a television commentator. Some of the ventures have been more successful than others. It would be asking a lot for any of them to match his fabulous athletic accomplishments. He suffered a heart attack in 1993 while in a hospital awaiting a knee operation, and underwent triple bypass heart surgery. Fully recovered and nearing age sixtyfive today, he looks toward his second retirement.

Certainly he was a special athlete. But why? A full length portrait suggests little. Even after he fleshed out at Louisville, the Unitas image was rather a source of amusement for teammates. He was stoop-shouldered and had thin legs. There were also, from top to bottom, a short haircut, boyish grin, and high top cleats. He stuck with the close-cropped hairstyle and shoes long after they fell from fashion. In action, he did display a strong throwing arm and good form. But then, an NFL season never goes by without a club giving up on a passer with a powerful arm and a far more impressive build.

Many have pointed to his work ethic, formed during a relatively demanding childhood. His father died when he was five, leaving a widow and two sons and daughters to continue a small coal delivery business. He recalls walking home from high school games in all kinds of weather, tired and sore, to shovel three tons of coal for customers. As athletes of similar unprivileged backgrounds have noted, professional sport seems easy after such a regimen. As a pro, Unitas’ postpractice sessions with pass receiver Raymond Berry are part of football lore. Berry was another nondescript physical specimen who compensated with extra effort and study.

Whether or not the upbringing had anything to do with his courage is debatable. Under this trait we can lump several things. We’ve already referred to his come-what-may composure. “Ice water in the veins,” the sportscasters called it. Few quarterbacks have engineered as many last minute victories. And then there was his pain threshold, extraordinary even in those less sympathetic times. Over eighteen years he suffered numerous hurts: broken vertebrae, ribs and fingers, a punctured lung, torn tendons and knee ligaments, etc. Many of the injuries he played with. He was given the last rites of the church after a lung/ribs mishap in 1958. George Shaw filled in for two Sundays; Unitas returned to full time work on the third.

His play calling was daring too. Hearing the term “riverboat gambler” constantly was tiresome, but one had to appreciate its significance. Weeb E\ybank, John’s first professional coach, remembered conferring with Unitas during a game the Colts were losing close to halftime. ‘“Keep it basic, and let’s go in and regroup,’ I told him.” Meaning, call running plays to run out the clock and rethink strategy over the halftime break. “Next thing I know, the ball’s in the air, tipped to a linebacker, and suddenly we’re down 21-7 instead of 14.” Usually it worked out better than that, but opponents could never count on Unitas to be conventional.

Colt teammates, on the other hand, found him totally predictable in most other ways. He was quiet but outspoken when he needed to be, serious, a loner. If he socialized with his fellow players after practice, it was only for one drink. Then it was home to a family which ultimately included five children. “He definitely was a family man,” one former Colt recalled. And always an unselfish one. As his career wound down with the 1973 San Diego Chargers, Unitas was informed he no longer was the starting quarterback. “Fine,” he told management. “I’ll help the club in whatever way I can.” Taken altogether, he belied the charming image one usually associates with great leaders. But a great leader he undoubtedly was too.

Unitas was, finally, also responsible to his younger public. He declined all tobacco and alcohol endorsements, although they were among the most lucrative. And then there were the unannounced visits to children’s hospitals, autographed footballs in hand. I can’t honestly say I regret discarding replies to two fan letters I wrote him as an eleven year old in 1964. The primary redeeming feature of the questions was that they permitted short responses. But Unitas took the time to personally respond, and I— and thousands of others to be sure—was thrilled and honored to hear back. Then and now. Hopefully, we honor him here.