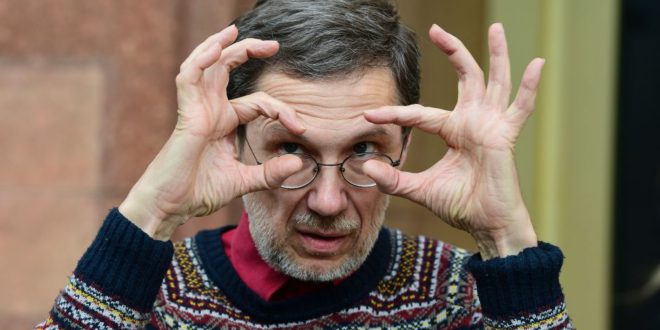 The long-sought and assumed lost Declaration of Lithuania’s Independence, signed on February 16, 1918, was discovered in Germany’s diplomatic archives in Berlin. Professor Liudas Mažylis (right) of Vytautas Magnus University in Kaunas announced the discovery on March 29, 2017.

“The Lithuanian version of the resolution with all 20 clearly visible original signatures was included next to the German language version of the document in a bound  file.” said the professor.

The document is folded in quarters, suggesting it was mailed, perhaps in a diplomatic pouch.

Mažylis said that the approaching 100-year anniversary of Lithuania’s statehood spurred him on to search for the elusive document.

“Lithuanian scholars seriously and consistently followed the German line. However, their efforts did not pay off. I decided to look at the German archives myself and to determine how accessible they were. It turned out that there were no particular restrictions. I wrote an email to Germany’s state archives and said I was interested in the period. I received a list of files and was told I could examine them. I did this. It took me two days.” said Mažylis.

He traveled to Berlin by bus. Upon learning of his historic find, the Lithuanian government paid for his return flight to Vilnius where he was greeted by an enthusiastic crowd and numerous media representatives.

The Council of Lithuania presided over by Jonas Basanavicius, signed the Declaration of Independence in Vilnius on Feb. 16, 1918. Historians believe that Jurgis Šaulys, one of the 20 signatories, handed the copy to German diplomats 99 years ago. It is thought that several original copies of the resolution were signed, but the whereabouts of the others are unknown.

A Lithuanian business group, MG Baltic, has offered a reward of one million euros to anyone who finds an original copy of Lithuania’s Act of Independence of 1918 and returns it to Lithuania.

Chemist finds needle in a haystack

A conversation with Prof. Liudas Mažylis about Lithuania’s Declaration of Independence and finding a long lost document celebrating a nation’s centennial.

During the last week of March, Lithuania was in a state of euphoria: an original of Lithuania’s Declaration of Independence was finally located in Germany’s vast archival holdings.

The original of the Declaration was an elusive Holy Grail which was missing since Lithuania’s occupation and illicit annexation by the Soviet Union some 70 years ago. It now has been established that the document has always been in the files of the German Foreign Ministry. It confirmed that its archive has been available to the public since 1956. It appears that no one, until now, has actually taken the needed steps to review the files to ascertain the whereabouts of this important document. It took Liudas Mažylis, a chemist from the Vytautas Magnus University in Kaunas, to take on this project and locate and identify modern Lithuania’s foundational document.

Who is Professor Liudas Mažylis, who in just a few days located the long-sought document which was feared to have been irretrievably lost 70 years ago? He is on the faculty of Vytautas Magnus University in the Department of Political Science and Diplomacy and is an authority on the theory of European integration. He holds a PhD in chemistry, as well as one in management and administration. He has studied at the University of Cambridge and has published 20 articles in peer-reviewed scholarly journals on issues relating to European integration, municipal policy, and administration.

Born in Kaunas, Mažylis has always actively participated in public life.  He served on the Kaunas Municipal Council and belongs to the Christian Democratic Party. His close friends and fellow professors know him as a passionate collector of historic postcards, stamps, books, and assorted other printed materials. Although not a historian by training, he has been an avid student of Lithuania’s history especially of the era following its Declaration of Independence in 1918.

“While the Declaration of February 16th does not contain the word freedom, it nevertheless is a document about freedom,” Prof. Mažylis shared this insight with assembled reporters in Vilnius airport upon his return from Germany.

Your Draugas correspondent was able to catch up with Prof. Mažylis prior thereto for an interview in Frankfurt where he was transferring planes for his return flight to Vilnius.

Dear Professor, within a few days of your discovery not only Lithuania, but the international community as well, including prestigious publications such as The Guardian, took note of this historic find. What was your reaction when you came upon this important document?

There were emotions certainly, a sense of civic pride, but foremost a sense accomplishment – the joy of victory. The ideal of February 16th, so pure and unblemished, spurred me on to continue the quest for this document defining Lithuania’s statehood. In fact, this victory is not just mine, but it is also all of Lithuania’s victory. The realization that while we finally have solved the most intriguing mystery of Lithuanian history leads to many other unresolved issues. One of them is, namely, the circumstances under which the text was lost and how it ended up in Berlin. On the other hand, when you think about it, perhaps in the next 100 years, no one will remember that this Declaration was once missing. And then there will be no need for additional historical research (laughs).

According to the archive regulations, the document could not be touched, but it could be photographed. How did you perceive it, being the first scholar to view it at after all these years?

It was the momentary impression. The first surprise is that the Act of February 16th is not typewritten, but handwritten calligraphically in very fine penmanship.

Currently there is much speculation about who could have been the scrivener of this Declaration. Some suggest that it is the signatory of Petras Klimas, while others opine that it is in the style of Dr. Jonas Basanavičius. What is your opinion?

At present I cannot give a definitive answer. But I have no doubt that we will soon be able to establish who the actual writer was. After some analysis we will know whose hand wrote the document.

Why did many historians believe that the original act necessarily had to be typewritten?

Apparently, because we recall the deeply ingrained image found in our school textbooks and historical sources of a printed version of the document.

You said that the discovery took you by surprise?

Yes, I went to Berlin hoping to find traces of the German original. I found not only the German, but also the Lithuanian document itself. Both of them were written by the same hand. That in fact was an unexpected surprise.

How do you believe that the Lithuanian original ended up in Germany?

I saw the German text of the Act, which was first sent to Berlin by telegram. The two original documents, the Lithuanian and German versions, are both folded into quarters, which in my opinion, suggests that they were transferred to Berlin by mail. The February 16th Act began appearing in public space only in 1928. Then it was published by agreement of the signatories to the Declaration. Apparently they decided that this was sufficient. My guess is that the document in itself was not deemed to be very important at that time. However, presently, after many years of searching for the original of the February 16th Act and the 100th-year anniversary of its declaration coming up next year, we view its historical significance quite differently.

The search for the February 16th Act has generated numerous conspiracy theories. Some believe that the first original is sequestered in the tomb of Lithuania’s patriarch Dr. Jonas Basanavičius, while others suggest that relatives of President Antanas Smetona appropriated the document. In fact, this historical conundrum has raised many passions in our society, however, the government authorities did not encourage our academicians to look for an answer and did not provide funding to finance this quest. Knowing that such research abroad is costly, most historians simply did not believe it was a feasible or a productive venture. A month ago it was suggested that a reward of 1 million euros be awarded to anyone who finds the original Act. Is this not support for concrete action?

Definitely this prize was not an impetus for me to start the search. Especially since I started much earlier, two years ago. I dwelled on this question for some time and began my search in earnest in the summer of 2016. At Druskininkai. I went to the library and was intrigued by the history of this unsolved mystery. Since that summer I began to take an interest in the issues and stories and pestered and bothered everyone around. I doggedly traveled to Lithuanian archives and museums and consulted with historians. Gradually, the idea germinated in my mind that Lithuanian researchers had paid too little attention to undertaking searches in Germany. About two months ago, I applied to the German State archives and sought their advice. They directed me to the German Foreign Ministry archive, which required the submittal of a separate application, which I did.

Am I to understand that you would decline the reward?

It is a completely non-academic issue. I am not associated with it. In fact, I would rather not comment on it.

Finally, did your profession, politics, and chemistry aid you in this search? After all, according to historians, such archival research requires serious scientific preparation and training.

The answer is easy. This discovery required some thought, a compass a sense of adventure and a dose of courage.

Thank you for the interview and we wish you a safe return to Vilnius! 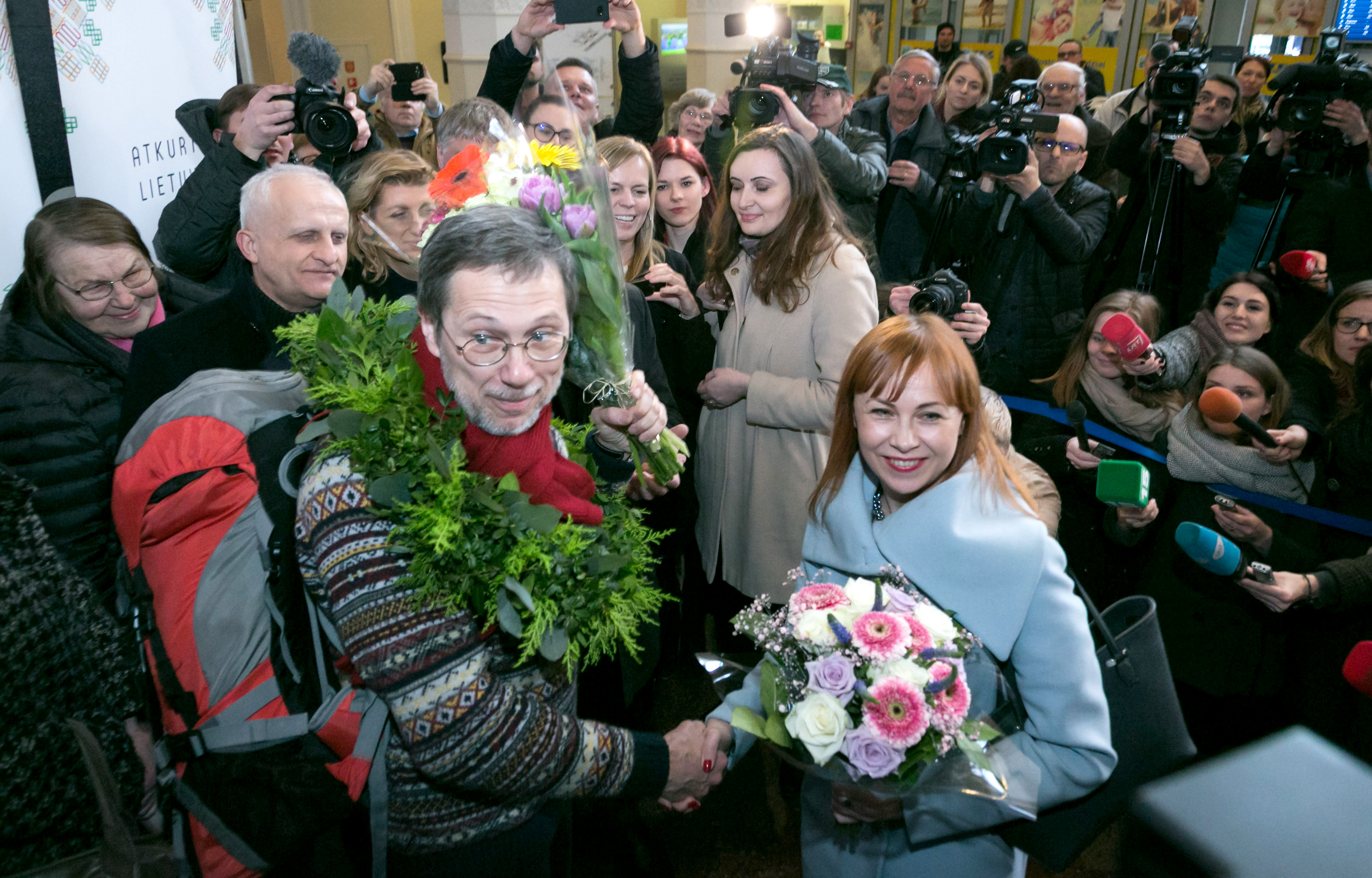