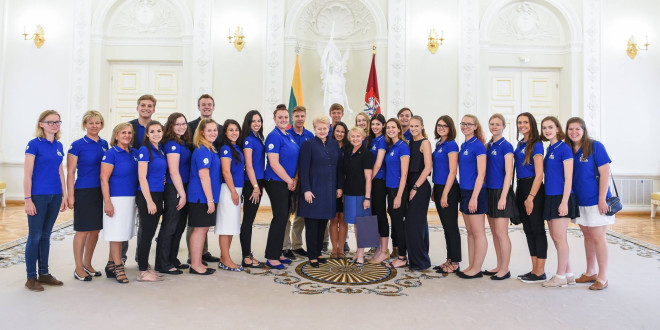 Interning in Lithuania – Total immersion from Robots to High Finance

American Lithuanian students have tremendous opportunities for self development and advancement – our heritage and culture has much to offer us. Although attending Saturday school and partaking in Lithuanian cultural events introduces us to Lithuanian culture, it is but an initial step in understanding what it means to be a Lithuanian. One especially effective way to achieve this is to volunteer as an intern in Lithuania. These internships are organized under the auspices of Lithuanian International Student Services (LISS) program. It was actually my grandmother who directed my attention to the advertisement about the internship program. What a phenomenal cultural experience it proved to be. In six weeks of total immersion, I learned more about Lithuania and its culture than I could have learned from any textbook.

The LISS program is organized through the Lithuanian Community organization in America. It strives to integrate mostly college-aged students into the academic, cultural, service, and business world of present-day Lithuania. Furthermore, partnering with Vytautas Magnus University in Kaunas allows these students, on a case by case basis, to receive credits at their home university as well. Each internship provides a unique experience. Two of my friends, Matas Lapkus and Jacinta Sherris, worked at a prominent company, a consulting company which promotes Lithuania’s export trade. Another friend, Lurda Jurgaitis, worked at a Lithuanian TV station, preparing interviews and recordings for TV.

As a finance major, I interned at a venture capital firm called Practica Capital. I analyzed and corrected financial statements, reviewed annual investments, and organized banking statements. I was able to appreciate how the European Union is involved in the economic dynamics of its member countries. The European Central Bank (ECB) has provided Lithuanian enterprises with low interest capital, leading to a large influx of capital resulting in a fair number of new start-ups. It will be interesting to see whether Lithuania will develop into Europe’s Silicon Valley.

Besides the noted business experience, the LISS program offers civic, cultural, and language-based internships. Thus meetings and interviews were arranged with prominent individuals such as President Dalia Grybauskaitė, Foreign Minister Linas Linkevičius, and Finance Vice-Minister Edmundas Žilevičius. We also attended major events, such as the World Lithuanian Youth Association meeting. My favorite events were the Žalgiris football match, and the Rio Olympic exhibition game between Lithuania and Spain. By the way Lithuania beat Spain by several points.

I was privileged to have a one on one interview with the Interior Minister Tomas Žilinskas. Much of the interview centered on how Lithuania has changed since joining the European Union.

One of the most significant changes Žilinskas noted  was the differences between the seven-year prospective starting in 2006 and the one starting in 2014. A prospective is a type of budget that each country within the EU  submits requesting funds to finance certain projects. A recent major change for Lithuania is the amount of money that it is allowed to borrow. Since the country holds one of the lowest debt percentages in the EU, currently around 40%, the EU is allowing it to borrow a greater amount. As a result, the prospective Lithuania submits is highly detailed with major projects and a diverse portfolio of investments. Although more money in the economy is on the whole a positive feature, the ministry does not want to raise the debt beyond 40%. For example, Greece’s debt levels have reached 110%. In order to track each prospective and ensure that debt stays relatively low, one-year and three-year interim budgets are also prepared. These budgets help the ministry balance expenditures and apply funds based on a prioritization of projects.

The three-day Lithuanian Youth Association summit (which is held every other year) took place while I was in Lithuania. It is a useful forum to connect with Lithuania’s business, culture, education, and political representatives. It is similar in its approach to events such as TED, Youth to Business, and Youth Speak. My favorite talk was “Robots in the Job market: Where will you be in 15 years?” It was a provocative discussion about the introduction of artificial intelligence in the near future. According to the so-called Moore’s Law, we learned that technology will keep multiplying in its effectiveness and efficiency. However its limits are yet to be discerned. How Lithuania, and the rest of the world, for that matter, will cope with these changes is yet to be seen.

Participating in the internship program opened up new doors for me. Besides attending many instructive programs and meeting experts in their fields, I also made new friends. Friendships that I hope will last over the years. I can’t tell you how many times we sang traditional Lithuanian songs that I learned at Camp Dainava. One of my fondest memories was joining in singing the Lithuanian anthem with people of all ages at the freedom tower. It was truly a homecoming.