In Janury , 1889, th e first issue of  Varpas (The Bell) appeared. With it began a new stage in the history of the developm ent of the Lithuanian press. Varpas lasted until 1905, much longer than any other periodical in Lithuania at that time.

With the ceasing of the publication of the newspaper Aušra (1883-1886), the Lithuanian national movement lost a consolidating voice. In both portions of Lithuania, that is to say Russian and German Lithuania, as well as in the emigration, a need was felt for a nationally-oriented publication.

At that time, Vincas Kudirka represented a new generation of Lithuanian intellectuals. He was one of twenty two members of the Lithuanian student society “Lietuva” in Warsaw, Poland. The purposes of the society were: (1) Spreading enlightenment, (2) the resuscitation and raising of the national spirit, literacy and art, (3) the improvement of the farm economy, and (4) the expansion of the borders of Lithuanianism. Books and newspapers were seen as the most important means of propagating such ideas and consolidating national feelings. 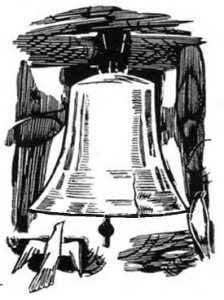 The founding date of the “Varpininkai” (Bellringers) is generally held to be June 29, 1888 when the members of the “Lietuva” student society of Warsaw met with their Lithuanian student counterparts from Moscow in the Lithuanian town of Marijampole. The group decided to publish Varpas. The periodical’s first editor was Vincas Kudirka.

Most Lithuanian intellectuals were attracted to Varpas. Over the years it had more than 150 contributors who generally met annually in various places in Suvalkija. The periodical ordinarily did not appear in more than 1,500 copies but was widely read.

Varpas was given direction by liberal, secular intellectuals. Varpas was tolerant in religious matters and sought to unite all Lithuanians no matter their separate religious beliefs. The periodical often teased those of strong sectarian convictions w ho in turn accused it of religious indifferentism and “freethinking.” It was also criticized by some of the clergy and conservatives. In time, many of the Lithuanian clergy separated themselves from the “Varpininkai” movement and began publishing their ow n periodicals, the Catholic Žemaiciu ir Lietuvos apžvalga (Samogitian and Lithuanian Observer) in 1890 and the Tevynes sargas (Guardian of the Fatherland) in 1896, which consolidated the Lithuanian.

Catholic intellectual movement. In 1894, the alienation of many secular and religious intellectuals from the Catholic Church was addressed by V. Kudirka in an article criticizing an encyclical of Pope Leo XIII to the faithful of Poland and Lithuania in which he praised Tsar Alexander III, and glossed over the persecution of Polish Catholics and the massacre of Lithuanian Catholics by the Cossacks at Kražiai.

At the end of the 19th and beginning of the 20th century, the Lithuanian nation suffered from national oppression — which came from the top of society. The social structure was typified by the remains of feudalism, then being shaken by gradual industrialization. Culturally, the greater num ­ ber of “bajorai” or gentry, the clergy and city dwellers had become alienated from the villagers, becoming strangers in their own land. The new industrializing strata w ere in the process of formation in the villages. The “Varpininkai” were aware of social inequality. They believed however, that it was necessary to subordinate social and economic issues to that of the national issue.

Although Varpas began to publish more and more controversial articles and seem ed to move to the left on social and economic questions, it was most concerned with the national question. The primary concern of each contributor was the strengthening of the national cause, the spread and use of the Lithuanian language in all spheres of life and the defense of the nation. The periodical insisted on equal rights for the Lithuanian language with all other languages spoken in the country.

Varpas wrote much about the efforts of the tsarist administration and the measures it took against the national press, schools, the freedom of religion as well as tsarist economic exploitation. Yet Varpas was not chauvinistic nor jingoistic. Although it criticized foreign landlords and oppressors, it was open to the cultural values of other nations. Since there was little yet written in Lithuanian, it looked to the examples of others in the developm ent of a national literature, particularly the Czechs, Hungarians, Norwegians and Armenians. It published works of other European classical authors. It lead its readers to the treasures of world literature heretofore beyond their reach in their own Lithuanian language.

Above all, Varpas and the “Varpininkai” agitated for sovereignty. In 1901, one of its editors, Povilas Višinskis, wrote, “O ur ideal is a free, independent Lithuania, freed from foreign and native despots, in which ignorance is trampled underfoot, which, together with other nationalities, is interested in economic betterm ent and is moving forward.” Similar sentiments had been expressed by V. Kudirka and serve as valuable memorials from the past because they encouraged and strengthened Lithuanian popular culture and the winds of freedom.

Author’s note: The author is heavily indebted to Dr. Vytautas Merkys and his article on the “Varpininkai” in Kulturos Barai, 1/89, (Vilnius), p.p. 32-37 for the material in this article.