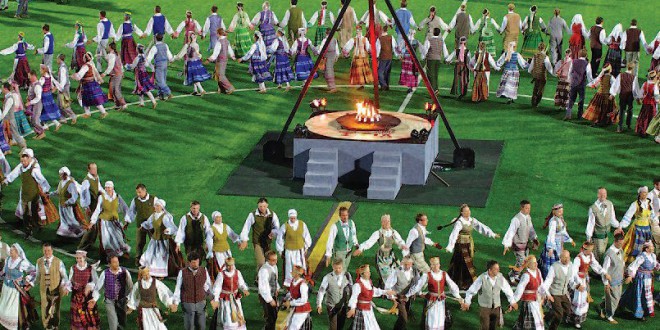 Before the singing begins, Lithuanians dance.

NO ONE CAN CONQUER A NATION THAT SINGS LIKE THIS NATION

July 15, 2014 Folk-songs-dance, Music, Religion Comments Off on NO ONE CAN CONQUER A NATION THAT SINGS LIKE THIS NATION 1,585 Views

It is July 2014 and it has finally arrived –– the National Lithuanian Song Festival. It takes place in Vilnius in Vingis Park, a site which has become identified with the first massive gatherings demanding freedom some twenty years ago. But today we are here to celebrate. We have come without regard to age: from the youngest school children to 90 year olds, some of whom are actually closer to 100. The parade of choirs commences. They have come from many countries, from diverse continents. And they sing their hearts out as they process in. Many dance as they sing. They have already walked some three or four kilometers from the Vilnius Cathedral plaza. They answer cheerfully to the many greetings and cheers offered them by the many on lookers, who have lined the streets along the parade route.

I am standing at one the entry gates to the Vingis Park. The festive spirit is building up to a climax. I secretly envy the participants, as I am but a mere onlooker.

Our attention is again directed to the parade. It is strikingly beautiful in its diversity of colors… The procession, which took about an hour and a half, ends with the singers in place on the platform. The audience is all in place as well. I am glad that I am not with those who are sitting comfortably in their seats or who are lounging in the square in front of the singers’ platform. The spot which I have selected has a more “democratic” atmosphere. I’m in the back – you cannot beat the grand perspective one gets at this distance.

The restless mob falls silent – the festival begins. Lionginas Abarius, the most senior conductor of the festival, youthfully leaps out of his convertible with a broad smile across his face. He has been the principal conductor of the these song festivals since 1965. He is certainly entitled to the prolonged applause and the respect of the singers. The beginning of the festival is dignified and calm. But that calm is not destined to last – the fatigue brought on by the march from the Old Town of Vilnius to Vingis Park dissipates with each new song. The singers emotions and voi – ces gain in momentum and rise in volume…

I came to Vingis Park on Friday and Saturday to check out the rehearsals. One of the conductors, a Chicagoan, Darius Polikaitis, was especially warmly received with thunderous applause. I came upon the renowned folk singer, Veronika Povilionienė, who commented: “He is talented, but he is charismatic as well. The song he composed to a text by Justinas Marcinkevičius “Brolis” (‘The Brother’) which is being performed here and which he himself is conducting, is not only one of the most popular songs of the singers, but it is also one of the most profound, it touches the heart.”

In fact, when I came to Vingis Park Saturday for the rehearsal, I noticed that the Chicago-based chorus “Dainava” was not rehearsing on the singers’ platform, but they were standing apart by some bushes. They had just found out the day before that they had been invited to take part in a special Song Festival ceremony at the Presidential Palace. At this ceremony they would have to sing the hymn “Lietuviais esame mes gimę” (We are Born Lithuanians) together with the best choruses from Lithuania. This was an unexpected invitation for them, and so while the other choruses were taking a break, the Dainava singers were attentively and patiently rehearsing among the trees…

At nine o’clock the singers joined a world-wide singing of the Lithuanian national anthem. Then the Festival organizers handed out awards to many accomplished participants. The most prestigious award of the Song Festival, the ‘The Golden Bird,’ was awarded to Darius Polikaitis and the “Dainava” ensemble. You should have seen and heard the joyful reaction of 14,000 Song Festival participants, when this award was announced…. Of course, that was not the only emigre choral group participating in the Song Festival – there were 15 choral groups from abroad with some 279 singers. They sang the ancient folk songs a capella. That is why UNESCO included the Lithuanian Song Festival into its list of World Heritage sites. We have something to be proud of – our songs and our singers.

When I consider our heroic struggle against tyranny, especially the tragic events of January the 13th, I recall the words of one elderly man who upon observing young defenders sitting in the cold by the Parliament and singing while stoking their bonfires: “Can anyone conquer a nation that sings this way?” 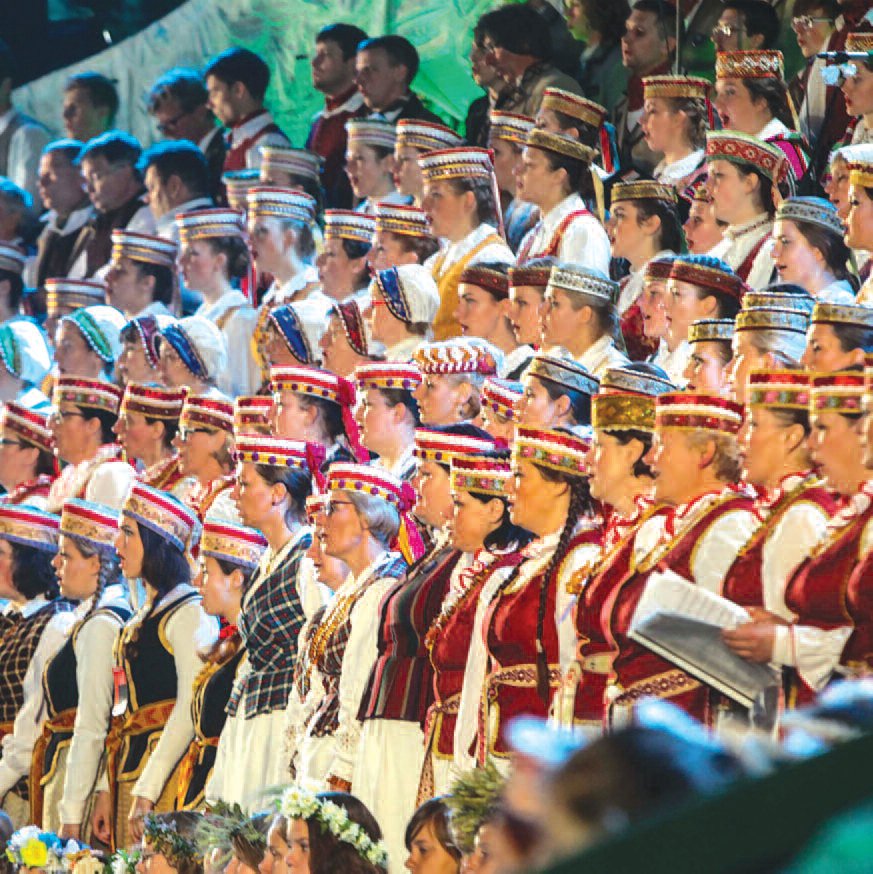