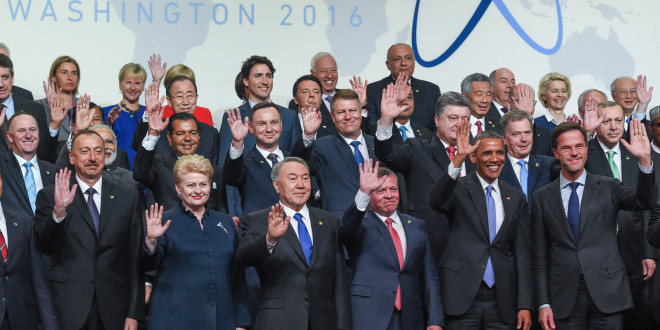 On March 30, Lithuania’s President Dalia Grybauskaitė arrived in Washinton, DC, to attend the Nuclear Security Summit. Invited by President Barack Obama, she and some 50 other world leaders discussed nuclear security, shadowed by concern that Islamic State terrorists are seeking to penetrate nuclear facilities. Notably absent from the summit were representatives from Russia.

The summit began with a working dinner at the White House, where the heads of state convened to discuss how to prevent nuclear terrorism threats. The President of Lithuania shared her insight and experience of the Baltic region in strengthening nuclear security. Lithuania’s own Nuclear Safety Centre has developed into a leading nuclear security-training center serving all of Eastern Europe. The US sources have observed that the center has been an uniquely successful project.

Previously Lithuania’s President attended the Nuclear Security Summits in Seoul (2012) and The Hague (2014).

On the eve of her visit to Washington, DC, President Grybauskaitė agreed to be interviewed for Draugas. The English translation of the interview was prepared by the staff of Draugas News.

Rosseta Wilbur: This 4th Nuclear Security Summit was to be the final one, but is it possible to adopt the definitive international commitments without Russia’s participation? After all, Russia is nuclear power and is also involved in nuclear projects in Iran.

President Grybauskaitė: The refusal of Russia, a nuclear power and UN Security Council member, to participate in this Nuclear Security Summit reveals the true face of that country’s leadership. Today Russia cannot be considered a reliable partner in preserving global peace and security.

Although this is a final summit, its work will not stop with this meeting. One of the objectives of these summits is to establish long-term government commitments to nuclear safety. This means that these issues will continue to be developed by various experts, diplomats and international organizations.

It is also expected that the countries will continue to cooperate on a regional level. Lithuania has been doing this for some time.  Lithuania took the initiative to establish a Nuclear Safety Center to prevent the unauthorized use of nuclear material. This center serves not only Lithuania, but also Ukraine, Moldova, Georgia, Armenia, Latvia, Estonia and Poland.

Western powers have not only the right but also an obligation to monitor the construction of this nuclear power plant at Astravyets. Belarus must guarantee that this power plant will be in compliance with all established safety standards. To date it has been unable to do so. In the event of a disaster, the effects will impact not only Belarus but also the entire Baltic Sea region. Therefore, how Belarus complies with nuclear safety is a legitimate concern of the entire region and the European Union. The European Union also expects Belarus to carry out tests to confirm that the power plant can operate safely under the most extreme conditions and that it will comply with all United Nations conventions on nuclear safety procedures.

The Chernobyl and Fukushima disasters have shown to the entire world what a great price in terms of human life and health is exacted by unsafe nuclear power plants. Ongoing international oversight of the construction of this power plant in Belarus is absolutely necessary to dispel doubts about its safety and its environmental impact. Therefore, we will undoubtedly raise this question at the Washington Summit.

The US press abounds with articles and commentaries asserting that the EU, faced with uncontrolled refugee flows and a stagnant economy, is on the verge of collapse. How would you respond to such commentators, predicting the imminent demise of the EU?

Almost each of the crises faced by Europe, was accompanied by talk of the collapse of the EU. However, such crises bring not only challenges but also provide us with opportunities.

The economic and financial crisis has forced Europe to look more closely to its own economic situation, how to attain fiscal discipline and to live within its means. New tools were developed which will help prevent the recurrence of similar crises in the future. European countries had the political will to mobilize their forces and resources to assist the countries facing the greatest challenges. This means that the commitments of the countries to work together to address the challenges they face are not merely empty words.

A similar attitude and ability to work together must be replicated in addressing the refugee crisis. Only this time, the EU has to face exogenous challenges. No one country can address this issue alone, so this crisis encourages the EU to pull together. Migration is often wrongly perceived as purely a European problem, however it is a global challenge, which can only be dealt with at the international level.

Will the EU come out of the current crisis stronger? When can we expect the crisis to end?

Not only the migration crisis, but also Russia’s aggression in Ukraine and terror attacks in the heart of Europe, are painful reminders that peace and security in Europe are not given. The EU must learn not only to talk about values. It needs to take resolute steps to defend them. This means that we need to stake out a principled position in the face of Russian aggression and support Ukraine by all means. We need to qualitatively improve cooperation with each other and with our international partners in confronting terrorism.  The EU’s external borders need to be secured to prevent illegal immigration. Europe must become stronger now – this is the only way to overcome the crises it faces today.

You were the European Commissioner. You are now a national head of state. Could you tell us in 2016, who faces the greater challenge – the leaders of EU institutions or the heads of state of the member countries?

Challenges for the whole of Europe are common, so we need to deal with them jointly. The safety of Europe and its wellbeing is a concern of both, the EU institutions and the respective states.

The government of neighboring Poland after the terrorist attacks in Brussels stated that it will refuse to accept refugees, even though the former Polish government had agreed to the quota set by the EU. Is it possible that Lithuania will follow suit? What is the refugee quota for Lithuania, and where will the refugees be located?

Lithuania is committed to accepting 1,105 refugees over a two-year period and will follow through on this commitment. Our country has already received the first refugees from Greece. They will spend several months in a refugee center, and later will be transferred to one of our municipalities. Our goal is for the refugees, who come to Lithuania to quickly integrate into our society, begin to live independently, study and obtain gainful employment. Lithuania is aware of its responsibility to aid people fleeing from war. How successfully refugees will integrate into our society depends in large measure on their own desire to live a full life in Lithuania.

You often criticize Russia in strong terms, but it does not seem that you are supported, especially by Western European heads of state, or do we just fail to see this support?

Lithuania does not criticize Russia, but calls things by their real names. Russian aggression in Ukraine, the Crimean annexation, breaking international treaties, cyber attacks and disinformation, and air strikes against civilians in Syria dispelled the illusions of European countries about Russia’s ruling regime and its intentions. Lithuania and other countries in the region have the support of their partners. Russia is subject to international sanctions. NATO is increasing its investment in our region’s security. At the NATO summit, which will take place this summer in Warsaw, together with other countries in the region, we will be urging the Alliance to strengthen the level of deterrence by deploying a greater number of NATO combat troops and military equipment in our region. Of course, we are strengthening our national security ourselves: we have created a national Rapid Reaction Force, and we are updating our military equipment. This year a second generation of conscripts will begin their training. We already have more than 2,000 volunteers signed up.

Is there anything you would like to ask of US Lithuanians?

LithuanianAmericans have a strong and vibrant community in the US, which promoted Lithuania’s cause for freedom and was a strong support during its most difficult days. Today it is imperative that you maintain a strong bond with Lithuania and continue to be its active ambassadors.