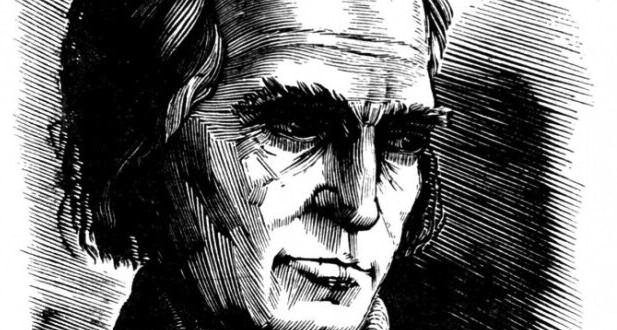 This year marks the 300th anniversary of the birth of Lithuanian poet Kristijonas Donelaitis.

April 15, 2014 History-before-1900 Comments Off on The Father of Lithuanian literature Kristijonas Donelaitis 1,686 Views 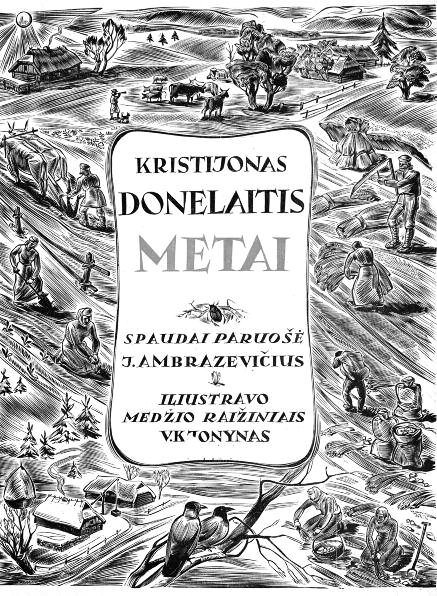 Donelaitis was born January 1, 1714, near Gumbinė (German: Gumbinen, Russian: Gusev). At the time, it was part of East Prussia, also known as Lithuania Minor; it is now under Russian administration, which renamed it Kaliningrad Oblast. These lands, beyond the Nemunas River, were for many years Lithuanian lands. In the Middle Ages because of the occupation by the Teutonic Knights, they have become part of German Prussia.

Donelaitis’ family were free farmers; they owned and worked their own farm. This was not common. Most Lithuanians – about 85% – were serfs, bound to the land as permanently indebted servants for wealthy German landowners. It is surmised that as a youth, Donelaitis must have exhibited academic promise. He was thus sent to study at the Cathedral school of Königsberg (Lithuanian: Karaliaučius), the capital of East Prussia. He lived in a free dormitory set aside for impoverished students. He earned money for his food and expenses by singing in the church choir.

Donelaitis studied theology at the University of Königsberg and participated in its Lithuanian Seminar. He also learned French, Latin, Greek and some Hebrew. He probably was the recipient of Duke Albrecht’s stipend for Lithuanian ministerial students. The government wanted to make sure the Lithuanian minority had an educated clergy which could fluently speak in their language. The ministers were charged with the teaching of reading, catechism, and Bible studies – the reading of God’s word in the vernacular is a major hallmark of the Lutheran tradition. Donelaitis graduated the university in 1740.

Donelaitis was appointed Cantor at Stalupėnai (German: Stallupönen, Russian: Nesterov). A cantor leads the choir and the congregation in singing during worship services. He was soon promoted to school principal. He was ordained in 1743 and appointed pastor of Tolminkiemis (German: Tollmingkehmen, Russian: Čistyje-Prudy), where he served the remainder of his life. Most of his parishioners were Lithuanian, with a few German-speaking families. He married the widow of his predecessor; they did not have any children. He let her run the parish farm, while he supervised the orchards.

Donelaitis was a multi-talented administrator. With others, he rebuilt the parsonage and later the storm-damaged church. In his free time, he built thermometers, barometers, various musical instruments and even a fortepiano.

The Seven Years War (1756–1763) with Russia brought devastation to his parish. Even he had to hide in the swamps from the Russians and conduct worship services in the forest. The ensuing damage from the war required many rebuilding efforts, such as the parish school. He raised funds to build an orphanage and home for widows. After the war, many German families settled in his parish, thereby becoming the majority. Donelaitis conducted worship services, preached sermons and taught catechism in both Lithuanian and German. He spoke both languages fluently since his childhood. He died February 18, 1780 and was buried in the parish cemetery. The church and parish house were restored and now house the Doneliatis Museum.

Donelaitis is considered the Father of Lithuanian literature. He is most widely known for his poem „Metai,” – “The Seasons.” Rev. Ludwig Rhesa (Lithuanian: Liudvikas Rėza) edited his writings and published “The Seasons” in 1818 with a German translation. He praised Donelaitis for his portrayal of Lithuanian noble thought, childlike spirituality, and fear of God. Additional republications and translations followed, and “The Seasons” soonachieved broad-based acclaim throughout Europe.

The poem consists of four parts: “Spring Joy,” “Summer Toil,” “Fall Bounty,” and “Winter Woes.” It portrays the life and work of the Lithuanian peasants: serfdom, traditions, nature, and the cruelty of the landlords. It has its humorous moments, celebrating weddings and births. Donelaitis emphasizes the hardworking nature of the Lithuanians, their morality, Christianity, and ethnicity. On the other hand, the German landowners are cruel hypocrites with little compassion for the serfs in their Godgiven care. Christ will return to punish them for their harshness against the poor. The landowners hunt wild game like hawks, hares and frogs, while the Lithuanian peasants consume simple but hearty fair from their own labors: barley, groats, parsnips, carrots, squash, dill pickles, radishes, beets, rutabagas, cole, beet greens, peas, sauerkraut, lima beans, beef, pork, lamb, chicken, and geese. They consume the God-given goodness from the work of their own hands. His language reflects the rich and colorful vocabulary and folk-sayings of the peasant farmers: “You too, o futile man, be thankful and content: Since you far better fare, fail not to thank your God!” (Nadas Rastenis translation)

The characters speak in an untainted South East Aukštaičiai (Highland) dialect (sometimes also called Suvalkiečiai). Imitating Virgil’s Aeneid, the poem is written in a neo-classical hexameter which is not typical of later Lithuanian literature. In Lithuanian schools, pupils learn the first stanza of “The Seasons” by heart, and recite it at various festive occasions.
In addition to “The Seasons,” Donelaitis has written six Aesop’s fables, a verse story, and several German poems. He recorded some of his German poems in the church’s register.

In 2014 Donelaitis was added to the UNESCO World Heritage List for his literary masterpiece “The Seasons.”

From THE SPRING’S JOYS

Now the sun rose again to rouse the world And laughed to topple down chill winter’s labors. And cold’s creations, with the ice, diminished As foam of snow changed everywhere to nothing. Soon the bland weather stroked and woke the fields, Called up herbs of all species from the dead. Thickets and every heath bestirred themselves; Hill, meadow, dale threw down their sheepskin jackets. All that had perished in foul autumn, tearful, In the lake clung to life the winter through, Or in some burrow slept beneath a bush, Crept forth in crowd and throng to welcome summer. And rats with skunks walked out of their cold crannies As crows, ravens and magpies, with the owls, Mice and their offspring and the moles, praised warmth. Beetles, mosquitos, flies, a bounce of fleas Formed their battalions everywhere to plague us And sting both peasant and his genteel Sir. And the queen bee remembered to awaken Her hive and send it forth to gainful labor. Through chink and opening they swarmed in clouds To play their tuneful pipes in the mild air. Spiders, in corners motionless, wove yarn Or soundless, climbed the scaffolds of their snares. And wolves and bears hopped to the forest-edge, Joyful that someone might be there to rend.(Clark Mills)

It was a wondrous thing that of the endless flock None of the warblers wept when reaching our dear shore. No; not to weep, but to rejoice they all came here. For now the winter’s chills and frosts were at an end, And the enchanting spring wrought wonders everywhere. Ah, now in every place new life was all athrob; The air was filled with tunes of songsters on the wing. Some sang in lower key, some soared to heights of tone; Some flew far, far above, up to the silvery clouds; Some on a low bough perched — and all of them praised God. As yet the food was scarce, but none of them complained. Some had returned in worn and shabby feathered garb, Some carried back a maimed or broken wing or crest, Though in the fields they found but little sustenance, They did not grieve and no heart-breaking tears were shed; They all sang their merry melodies. (Nadas Rastenis)

From THE TOILS OF SUMMER

We Lithuanians shod in bast shoes, we’re called wretches, We’re too lowly for the lords and all their servants; But we’re not afflicted by their lordly ailments. How they grunt and groan in town and country manor While the summer comes to cheer us with a visit; There’s one with his gout, he’s bawling loud and loutish, There’s another, how he bellows for a doctor! Ah, but why are rich men plagued by such afflictions? Why does death reap up the lords before their hour? It’s no riddle; scoffing at the chores of peasants, Lazy, shamming good, they overstuff their stomachs; We, the serfs they scorn, our stomachs light with skimmings, Buttermilk and whey, we hurry-scurry briskly; With a snatch of bacon or Lithuanian sausage, We work better at the labors forced upon us. (Demie Jonaitis) 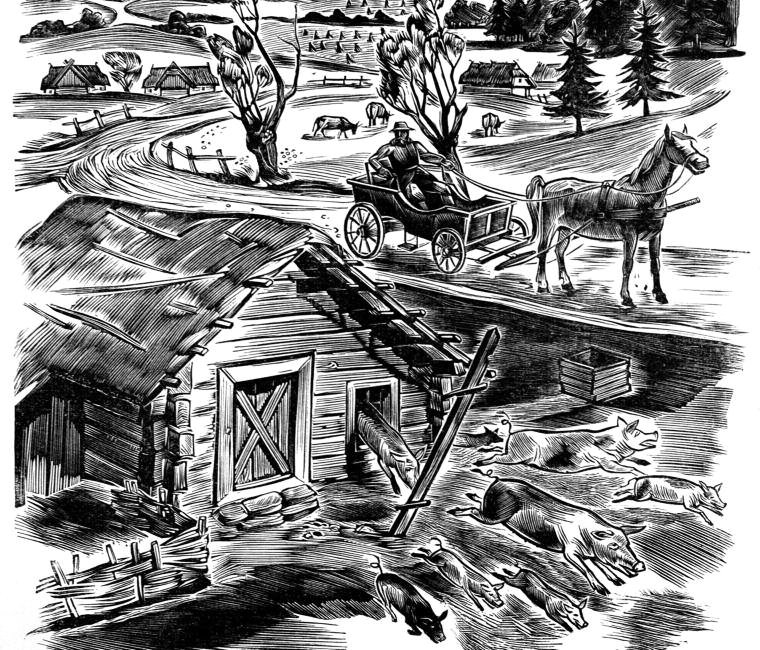 Don’t we all know how we’re born, with everyone naked. Slippered Duke as well as us poor devils in sandals, Emperor the same as one of his shawl-covered subjects? Like the best-dressed gentleman, the beggar is born moronic And, no differently, he sucks on the breasts of a woman. Sir in silks and serf concealed by straw have to whimper Till the time when both at last start sensibly thinking. Whether little serf or master empties his bowels, One must wipe his bottom with a strip of linen, Then must wash his dirty diaper out in water .. . Every man must make an effort even at gaping Once he’s spiraled out of darkness into the daylight And when later, dreaming in the cradle, he hollers; Merely being born makes each one equally wretched. Next time heirs are tucked in, in their elegant trundles, While the kids in huts are shoved to shadowy corners Or, if swaddled, set in shabby straw for their bedding, Ask yourself if they themselves brought much of their riches Of the gentry, not a one was born with his weapons, Nor has any newborn peasant ever delivered Parts for rakes, his wooden plow, or teeth for a harrow. Meeting peasants, highborn lords puff up with their pride like Globes of bacon fat afloat on leftover soupstock; But the wretched peasant, holey cap in his hands, stands Trembling by his empty stove for fear of their lightning Or, from far away, bows low, respectfully stooping. God appoints a civil place for every person: Some, parading crests as aweinspiring princes, Others, slogging through the muck as diggers of cowdung. (Theodore Melnechuk)

From THE CARES OF WINTER

Cold fields, there, up whose summer-rounded shoulders We made scratches, then ran scattering the grain, Sleep today in ice and snow like comforters. They show none of God’s magnanimous promises, Nor His plans for us before we saw the world. Yet with His help we shall know their full fruition: Summer must come again, and we’ll enjoy her balm. We need time, so let us wait the time in patience. Till the fields bring yield, let us not tire of waiting. You, dear God! You, our heavenly benefactor! You, in millennia before we could reflect, Knew already how we should be brought to Light, Knew our needs when we should come to meet that day. (Clark Mills)

Previous A conversation with the Luschas family
Next God, Give Us Wings