Home - History-before-1900 - The Jesuits in Vilnius 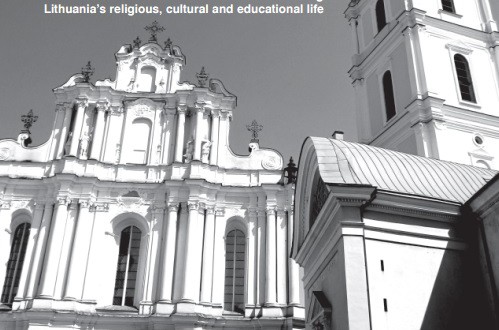 Main courtyard of Vilnius University (founded as the Jesuit Academy in 1570, and as university in 1579), with St. John’s Church at one end.

The Jesuits in Vilnius 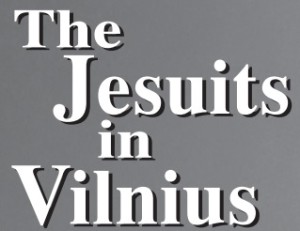 VILNIUS HAS BEEN THE center of Lithuania, both Grand Duchy and Replic, for seven centuries. For two of those centuries, Vilnius was the hub of a wheel of Jesuit education and ministry from Prussia to Russia, Estonia to northern Poland. The Jesuit heritage in the capital gives witness to the growth of the city, urban society, the multifaceted service in the Church, and the classic image of citizenship. A tour of former and actual Jesuit places in Vilnius, as exhausting as “shop and drop,” could be called “stare and share.” Most visitors know about Vilnius University and the Jesuit church of St. Casimir, but there is much more to see, plus two anniversaries to celebrate in 2012 and 2014.

My favorite place to start a walking tour of history from 1569 to 2012 is the courtyard of 16 Aušros Vartų Street, the former site of the church of St. Joseph (of Arimathea) and St. Nicodemus. The church lived from 1625 to 1799. After an eighteenth century fire, it was rebuilt as a residence. When the air is foggy, as in November, one can almost see the shadow of the former Jesuit pastor surveying the grounds and building. Some people hear hymns; others note bells ringing mysteriously above the forgotten burial chambers. The former hospital surrounding the courtyard is now living space, offices, agencies, or stores. For almost a hundred years, victims of the plague were brought here for solace and care. The church and hospital were built in the spirit and with the support of alumni of Jesuit-founded Vilnius University, where being a citizen meant having an excellent education, promoting the common good with attention to the underprivileged: “men and women for others,” as is said today. The street behind this complex was called Nikodemo Street even in Soviet times; now it is Lapų Street. Appropriately enough, in the 1990s, the Catholic Women’s Society had its children’s home on the property, just outside Aušros Vartai, the gate of the old city wall.

When the first four Jesuits arrived at the invitation of the bishop in 1569, they sought out living and school rooms in sites that offered the best conditions for the missions of education and the promotion of faith. At that time, Vilnius had several markets along its main streets, Pilies and Didžioji, ideal places for reaching people, both humble and aristocratic; for the processions of rulers, noble visitors, foreign ambassadors and church officials passed directly in front of the existing St. John’s church and city hall on the way to the royal palace and cathedral. The first school year began in 1570; St. John’s was entrusted to the Jesuits in 1571; the University (then called the Academy) was founded in 1579. The cornerstone of the principal Jesuit church and residence was laid at City Hall Square in 1604, the year Lithuania celebrated its patron saint’s canonization. Four hundred years later the death of Fr. Petras Skarga, the first rector (“president” today) of Vilnius University, is being marked in Poland and Lithuania this year.

As Fr. Thomas Lucas, S.J., of the department of fine arts at the University of San Francisco explains in Landmarking: City, Church and Jesuit Urban Strategy (Loyola Press, 1997), the Jesuits always sought out places that would be suitable for a pluriform ministry—for teaching, preaching, and celebrating sacraments. It was important that many people participate; the heads of state and church should be nearby, since these could spread the good that would come from these ministries. Today, we would call such influential people multipliers. It is no surprise that the Jesuit house (1583), school (1632), and present church (1722) in Kaunas are at Town Hall Square and the former marketplace, and the Church of St. Ignatius in Šiauliai (1936) is on the main street near the farmers’ market. (In the U.S., in more recent times, Loyola University at Chicago has its Water Tower Campus, Fordham University has the Lincoln Center site.) Today, as in the past, one can visit Vilnius’ Jesuit School and the Jesuit residence adjacent to St. Casimir’s Church. The first small house the Jesuits bought can be seen in the north courtyard. The location of the original well is marked with colored brick.

The third urban church in Vilnius is St. Ignatius, presently the Church of the Military Ordinariate, between Ignotas (St. Ignatius) Street and Jesuit Street. Built in 1622-1647, it is adjacent to the former novitiate, now the Library of Science, and the Jesuit residence, rectory, and chapel, now the Ministry of Defense. Some wonderful frescos can still be seen in these buildings. It is so difficult to imagine Vilnius in the sixteenth through seventeenth centuries, when the inhabitants numbered perhaps 30,000, a substantial city at that time, but a small fraction of today’s 600,000 or more.

Jesuits always looked to serving those at society’s margin or underserved by church ministries. That is how schools began, since normal parishes did not particularly serve children, teenagers, or young adults. The church and hospital outside the city walls reached those living on the outskirts or coming in from the interior. In addition to Sts. Joseph and Nicodemus, the church of St. Stephen (1625), presently not too far from the bus and train stations, also had St. Lazarus Hospital around it. Appropriately enough, today the building houses the Kofoed School, which serves former prisoners. The third suburban church is that of St. Raphael the Archangel (1702- 1709), just across the Neris River in Šnipiškės, where, since 1740, the Jesuits of Lithuania have spent their tertianship—the spiritual year following completion of studies. The placement of the churches, residences, and schools made them available to the diverse populations of city and country. St. Ignatius’s Church was very near to the Tartar mosque and Tartar Street. German Street was right across Town Hall Square and St. Casimir’s. The University is in the heart of Old Town. As the Society of Jesus was and is international, these ministries reached the various nationalities, social levels, tradesmen and merchants, royalty and clerics. Good communication with the surrounding area and the rest of the Grand Duchy was convenient for missionary work in towns and villages. During the last Black Death (1709-1710), St. Casimir’s fed four hundred children daily.

There is more to the Jesuit heritage in Vilnius. The noble Radvila family entrusted the Jesuits with their mansion near the bend of the Neris River (Vingio Park). Its seventeenth century St. Rosalie’s Chapel paid homage to this patron saint against the plague. Constructions from this settlement can still be found at the edge of the Botanical Garden, and ten years ago restoration of the Baroque garden was proposed. On the way to the castle and shrine of Trakai stands the chapel of Jesus Crucified, convenient for pilgrims to Trakai and travelers to Kaunas and beyond, under Jesuit care in the seventeenth through the eighteenth centuries.

No brief note about Jesuit places in Vilnius would be complete without the story of the royal crown atop St. Casimir’s cupola. During czarist occupation, it was replaced by the Orthodox “onion dome.” During Nazi occupation, the architect Jonas Mulokas clandestinely undertook the restoration of the crown of the Grand Duke. The Soviets wanted to remove it, but were thrice thwarted. Moscow asked for an agent to come and receive the order to tear down this symbol. The Lithuanians sent a Lithuanian Jew, who excused himself, saying that the rumors would then claim that the Jews persecuted Catholics. At the second order, officials were told to remove the cross above the crown. The local committee suggested removing not one cross, but thousands—from ambulances. The last order was being carried out when artists working in the theater workshop (then located in the present SAS-Astoria hotel across the street) saw workmen on the cupola, came out with faux rifles, and threatened the workers, who were probably not too anxious to carry out the Soviet order anyway.

Of the eleven courtyards of Vilnius University, several are named after Jesuit professors: Petras Skarga (1536-1612), the astronomer Martynas Počobutas (1728-1810), the author and linguist Konstantinas Sirvydas (1578/1581-1631), and the poet Motiejus Kazimieras Sarbievijus (1595-1640). Not too far from the cathedral are streets named for Sirvydas, the architect Tomas Žebrauskas, and the musicologist Zigmantas Liauksminas. Named after the historian, Albertas Kojalavičius Street traverses all of the neighboring town of Naujoji Vilnia parallel to the highway leading to Polock (now in Belarus). Polock was part of Lithuania from the fourteenth to the eighteenth century, important also in Jesuit history and the site of a miracle attributed to St. Casimir during the seventeenth century wars with Moscow.

The Jesuit Province of Lithuania had 1,114 members in 1755, with the University of Vilnius, twentyone colleges, eight residences, and sixty mission stations serving towns and villages. When the Society of Jesus was suppressed by order of the Pope in 1773, the edict was not proclaimed in lands held by Russia’s Catherine the Great. The bishop of Livonia, Steponas Jonas Giedraitis, did not enforce the papal bull either. More than two hundred Jesuits lived in Polock, just across the border, with four colleges, two residences, twelve mission houses and six schools. However, all of the properties and works of the Jesuits in Lithuania were taken over by the government, church, or other religious orders, most never to be returned to the Society of Jesus. Many Jesuits remained in Lithuania after 1773 to study, teach and work, including Vilnius University rectors Martynas Počobutas and Ignas Žaba. The network of schools became the basis of the Ministry of Education of the Grand Duchy.

With headquarters in Polock, the Society of Jesus in White Russia numbered 201 Jesuits in eighteen residences, including 34 in nine mission stations, radiating out from Daugavpils, Latvia. Russia itself expelled the Jesuits in 1820, although they had already been revived in the rest of the world by 1814. The half century of Jesuit ministry in the expanse of the Russian empire founded communities and churches, serving Catholic colonists of many nationalities well for 150 years, including exiles of czarist and Soviet tyrants. These foundations were the basis for the legal recognition of Catholic parishes after the fall of the Soviet Union.

The two hundredth anniversary of the full restoration of the Society of Jesus is already being planned with learned studies, conferences, publications, and celebrations, with special attention to the Jesuits of White Russia of the Polock period. The international character of these priests, brothers and students is evident in the ethnic backgrounds of the 358 Jesuits in 1820: 142 were from Polish, Latvian, or Lithuanian families, born in lands then ruled by Russia. The places of birth of the others were Germany 42, Lithuania 33, France 24, Poland 21, Latvia 20, Belgium 11, Switzerland 5, Italy 4, and one each in Bohemia, Dalmatia, England, Holland, and Portugal.

Soviet dictionaries described “Jesuit” in very inaccurate and pejorative terms, so it was inconvenient for Soviet historians to mention Jesuits more than briefly in the history of Vilnius University and of Lithuania. They would turn over in their resting places, if anyone suggested a guide book called Vilnius is a Jesuit City, Too.

Previous For Your Sweet Tooth
Next A Sweet Easter