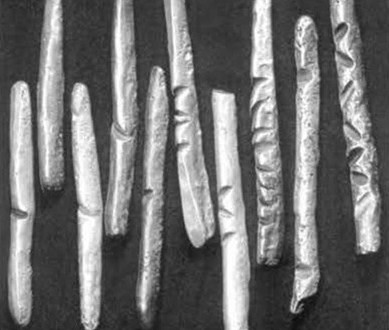 Lithuanian "kapos" of the 13th—14th centuries.

The complete absence of gold or silver-bearing ores in their country has never stopped the Lithuanians from appreciating and crafting the noble metals. Jewelry found in archaeological sites reveals that silver has been prized and fashioned in Baltic lands continuously since times immemorial. While small deposits occur in several European sites, the ancient sources supplying the metal to this region are not known. The rich lodes at Kutna Hora in Bohemia began to be mined only in the 13th century, making silver available throughout Europe as never before.

It is no coincidence that kapos, the distinctive currency of medieval Lithuania, appeared about the same time. Commonly formed into long, thin bars of silver, a few stubbier ones were even cast in gold. Not stamped with dates or the insignia of rulers, kapos are difficult to date. Even so, specialists tend to agree that they first appeared during the ascendancy and reign of King Mindaugas (1219-1263), attesting to the wealth of the realm and its integration into far-reaching trading networks. Only a prosperous kingdom could have accumulated enough silver to issue kapos in the large quantities which were needed to maintain regular commercial relations.

Although the minters who actually produced the kapos remain unknown, a certain Jokubas might be the one and only exception. He is the earliest goldsmith working in Lithuania to be identified. A document found in Riga, dated 1292, notes in passing: “Jacobus aurifaber regis Lettowie,” i.e. “Jacob— goldsmith to Lithuania’s king.” Besides creating jewelry, it is entirely likely that he also had responsibilities in the royal mint. The king alluded to in this document would have been Pukuveras because Vytenis, his better-known son, began to rule in 1295. Lithuania’s ruling elite evidently had need of goldsmiths and jewelers from its earliest days.

The church was the other major institution requiring their skills. Catholic rituals and ceremonies could not be conducted without chalices, patens, monstrances, reliquaries, and a panoply of other articles. As the number of parishes and monasteries expanded from a handful into the hundreds, the total quantity of such artifacts also rose. Over the passage of centuries thousands of silver and gold articles came to be created for religious purposes. The exhibition “Christianity in Lithuanian Art,” currently on view in Vilnius, has put several hundred of these liturgical objects on dazzling display.

Since the local craftsmen were unable to supply articles for the court and the church quickly enough, goldsmiths from every corner of Europe were welcomed and encouraged to settle down. Once they owned a house in the city they could become its fullfledged citizens. Outward emigration of skilled craftsmen sometimes also took place. Take the case of Jonas Lietuvis (Jan Litwin). Active in Vilnius until 1435, he moved to Cracow and presided over its guild of goldsmiths for several terms.

Royal warrants issued in the 1490s created goldsmiths’ guilds in Kaunas and Vilnius, their bylaws modeled after those of German guilds. One of the key provisions required every applicant for membership to demonstrate his skills by creating three objects: a ring inset with a jewel, a signet engraved with a coat-of-arms, and a wine goblet. For apprentices from Germany, the requirement seemed perfectly reasonable, but the Lithuanian and Russian goldsmiths of Vilnius were dismayed. They petitioned the king, notifying him that their fathers and grandfathers had become goldsmiths without ever submitting samples of their work to anyone. The king considered the m atter and decreed in 1544 that they could engage in their craft like their forefathers did without joining the Vilnius guild, dominated as it was by German master goldsmiths.

The inventory the magnate Albert Goštautas compiled in 1510 indicates the types of deluxe articles these craftsmen were asked to create. His armor was damascened with silver, his helmets embossed with gold. His swords and rapiers were^ nielloed with the precious metals; their hilts and scabbards glittered with precious stones. The equestrian equipment was no less spectacular: his saddles and stirrups, bridles and trappings, were all trimmed with silver and gold. Becoming even wealthier as the Chancellor of Lithuania (1522-1539), Goštautas supported the church with munificence. O f all his gifts, the Geranainiu Monstrance was the most splendid. Five feet high and weighing 28 pounds, this filigreed marvel of silver and gold is the centerpiece of the exhibition mentioned above. Previously, the monstrance was kept under lock and key, to be brought out only once a year on Good Friday in a secluded chapel in the Cathedral of Vilnius.

The tastes of the Lithuanian magnates were as extravagant as their pockets were deep. Their willingness to pay attracted some very talented artists to the realm. Of the number ous foreign arrivals, John Jacob Caraglio was unquestionably the most famous of all. Born in Verona, Italy, he was active in Vilnius in 1539 and intermittently thereafter. Significantly, Caraglio was one of the few goldsmiths that Giorgio Vasari saw fit to mention in his multi-volume Lives o f the M ost Excellent Italian Architects, Painters, and Sculptors. First published in 1550, the classic work is still in print. Examples of Caraglio’s surviving work may be seen in the Hermitage and the Metropolitan Museum of Art.

Some unique articles of silver and gold crafted in Lithuania were acquired by museums in Moscow in an entirely normal and peaceful manner. Throughout the long life of the Polish-Lithuanian Com m onwealth, all of its diplomatic and political relations with Russia had to pass through and receive their final, finishing touches in Vilnius. W arsaw, for its part, did the same for dealings with the European capitals. It was then customary for ambassadors to exchange wondrous presents with the monarchs of the countries to which they had been sent. Besides demonstrating the Commonwealth’s economic might and munificence, gifts of rare, beautiful, or costly objects helped the envoys to sweeten trading relationships, consolidate marital arrangements, cement military alliances, substantiate diplomatic overtures, and so on. W hen objects from royal collections later passed into the public domain, museums acquired and preserved some of these gifts.

Of course, it was not always sweetness and light. Besides the losses incurred over two centuries of conflict with the Teutonic Order, subsequent wars with other foes were just as devastating. For instance, from 1655 to 1661 Vilnius was occupied by Cossacks and Muscovite troops who stripped the city of its treasures and burned it down. During the Great Northern War of 1700-1721 the armies of Sweden plundered and devastated the country. A century later in 1812 Napoleon’s troops picked up mementos of minor and major value as they scoured the land for forage, shelter, and food. During the wars and occupations of the 20th century, German, Polish, and Russian armies in Lithuania did the same and then some. Booty taken home by soldiers eventually passes from one collection to another, the best items usually ending up in museums.

Edmundas Laucevicius and Birute Ruta Vitkauskiene spent many years tracing the whereabouts of works created by the goldsmiths of Lithuania— no easy task, since the objects were widely dispersed among distant museums and private collections. Besides the articles in Kaunas and Vilnius, many more were located in Moscow, Warsaw, Berlin, Tel Aviv, Stockholm, Paris, and New York. Their findings appear in the recently-published Lietuvos Auksakalyste XV -XIX amžius (Lithuania’s Goldsmithing 15th – 19th Centuries). A treasure trove of information, this volume is especially valuable for identifying and discussing the activities of almost 2,500 apprentices, journeymen, and master goldsmiths, slightly more than half practicing the craft before 1795, the rest in the 19th century.

After incorporation into the Russian Empire, the guilds in Lithuania relinquished quality control to the assayers sent in by St. Petersburg. Whatever else might be said about them, these officials kept excellent records. They tracked how much silver and gold passed through their offices annually and registered who made what. In 1859, for example, Vilnius produced 848.5 pounds of silver goods, increasing the total to 1308 pounds the following year. J. Danišauskas used 112.5 pounds of silver in 1859, L. Gold— 65 lbs., K. F. Meyer— 111 lbs., and so on down the list of the other thirty-two registered goldsmiths. We can even find out how many sterling silver cups, saucers, candlesticks, tea caddies, etc., a goldsmith brought in during any given year to be hallmarked. Most readers will probably find the listings of silver teaspoons and golden earrings to be tedious and boring. Collectors of Lithuanian silver, on the other hand, consider this sort of information priceless. Incidentally, if the annual totals were added up, we would discover that by the end of the 19th century tons of silver had been crafted by the goldsmiths of Kaunas and Vilnius.

During this period goldsmithing was overtaken by fundamental changes which no one had foreseen or could possibly control. For a start, the goldsmiths’ traditional clientele was decimated through the Napoleonic Wars, the abortive revolts of 1830-31 and 1863-64, plus the resulting exile or emigration of their leaders. The loss of this market segment was offset by the increased demand of the middleclass for the cheaper, mass-produced silver-plated objects. W hen the railroad connecting Vilnius to Warsaw and St. Petersburg opened in 1860, these goods became readily available.

The discovery of gold in 1849 in far-off California, of immense silver deposits in the 1870s in Nevada, and more gold in 1886 in South Africa, flooded the world’s commodity markets. Prices plummeted.

Articles made from the noble metals during the second half of the 19th century became less costly. Anticipating a rising demand, goldsmiths in Vilnius took on more apprentices. Several even set up small factories to manufacture silver goods.

In 1886 St. Petersburg decided to combine the previously separate guilds of the Christian and Jewish goldsmiths. Watchmakers, jewelers, and coppersmiths were also included into the reformed guild, but it was unable to overcome the challenges it faced. Established four centuries earlier, the guilds were closed down in 1893. The czarist assay offices functioned until World War I. Afterwards and throughout the 20th century, the goldsmiths of Vilnius, Kaunas, and Klaipėda continued producing articles of silver and gold. Surprisingly, though nearer to us in time, information about them is still too fragmentary for a coherent account.

We can conclude our overview on an upbeat note as the jewelers and goldsmiths of Lithuania have recently joined forces and formed a guild. Aiming to revive some of the old traditions and to popularize the craft, its practitioners, and their creative work, the guild has just opened its own gallery Meno niša (The Art Niche) on Basanavicius St. in Vilnius. The inaugural show “Auksas mene” (Gold in Art) exhibited fine works of jewelry, beautiful enamel pieces, and also conducted some live demonstrations of goldsmithing techniques. The gallery intends to follow this event with a range of individual and group shows planned for the months to come.