THE LITHUANIAN WEDDING A FAMILY CELEBRATION

THE MOST IMPORTANT WAY OF PRESERVING AND continuing cultural traditions has always been, and still remains, through the family. In Lithuanian culture, starting a family was not just the couple’s personal responsibility. Weddings were always community affairs joining not only two people, but two families. Thus, it was the duty of the two families and other villagers to make the occasion as festive and grand as possible. It is not surprising then that wedding festivities were rich in collective creativity and expression.

Lithuanian wedding rituals followed rigidly fixed forms. At the end of the 19th century and early 20th centuries, weddings consisted of three separate stages: matchmaking,the wedding itself and atgraztai (coming back). Each one of these stages had strictly defined traditional elements which all participants observed. 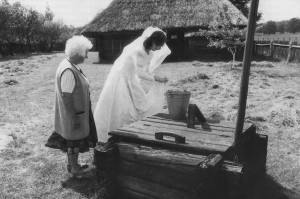 The first stage included all of the rituals concerned with the piršlybos (official offer of marriage to the bride’s parents), discussion of terms, examination of the groom’s farm and finally the ziedynos (pair’s decision to marry).
The wedding ceremony itself could then take place. The first part of the wedding was held in the bride’s home, marking the end of the bride’s life with her family and separation from her parent’s home. The bride’s farewells to her relatives, home and friends were dramatic and sorrowful. The climactic moment occurred when she finally drove off to her husband’s home. All of these events were accompanied by the bride’s raudos (lamentations) and farewell songs performed by the sorrowful family and guests.

The next important moment of the wedding was the bride’s arrival at her husband’s house. First, the kraitvežiai (dowry drivers) arrived bearing the dowry in chests. These chests were filled with the results of many years of the bride’s handiwork in expectation of her wedding: rolls of fabric, clothing, bedclothes, towels and woven sashes. The bride herself conducted the division of her dowry and other gifts. Her first act upon entering her betrothed’s home was to place a colorful (usually red) sash or towel on the hearth or by the stove. This act was meant to gain the goodwill of the hearth’s fire and the household spirits. She also hung sashes on the krikštašuolis (the place of honor), on the well’s sweep and so forth. The husband’s parents and family received woven sashes, towels and shirt materials as gifts.

During the wedding ceremonies, the bride’s youthful wreath of rue was replaced by the mature woman’s headdress. This ritual symbolized the acceptance of the bride into her new home as well as her transition from girlhood to womanhood. The other married women, led by the svocia (matron of honor), conducted this part of the ceremony. Married women’s headwear varied among Lithuania’s cultural regions. For example, in Aukštaitija, wives wore elaborately tied linen sashes called nuometos on their heads.

All of the wedding participants made sure that all accepted and familiar customs were followed. For example, they guarded the bridal pair, especially the bride so that evil persons could not damage their health or fertility. Corresponding spells and rituals were conducted in order to protect them. The young pair was showered with grain and water and clothed in furs to insure that they’d be rich and successful growing grains and livestock.

The third part of the wedding ceremony, atgraztai (coming back), was comparatively simple and quiet. Approximately a week after the wedding, the bride drove back to her parent’s house for a brief visit. For the first time, they took her into their home as a guest instead of as a member of the family. (From Lithuanian Roots — Vilnius, 1995).

Found your Lithuanian sweetheart and ready to take a walk down the isle? Great. Now you’ve got to do more than just pick out a dress and tuxedo, find a priest, order flowers and invitations, get a caterer, pick a cake… you have to learn about the inimitable traits of a Lithuanian wedding. Although weddings have become less traditional as time passes and people move from the countryside where traditions have a tighter hold – to the city, where people invent new and modern ways to celebrate, some elements remain and are celebrated with gusto.

Alcohol plays a big part in wedding festivities. One tradition is for wedding guests to yell “Bitter!” to signal the bride and groom (or any other couple) to down a shot of vodka and to kiss to sweeten the bitter taste in their mouths. This custom usually escalates to include the entire wedding party and all the guests until every couple has kissed each other and every bachelor has been forced to kiss a single woman.

Vladas Dobilas, a Radio Vilnius correspondent and Lithuanian traditions expert, adds that in the country the reception is celebrated at the bride’s home where “impostors” have secretly entered the house to take over the bride’s and groom’s seats at the table. The “impostors” are usually a man dressed as a bride and a woman dressed as a bridegroom. The trick to removing these people from the table is to offer them a drink.

Dobilas also says, that the matchmaker who is traditionally male acts as the center of revelry. Tradition holds that the matchmaker should be sentenced to death because he has lied to the bridegroom about the bride’s wealth. The sentence is death by hanging. The bride comes to his rescue before the execution and instead his effigy is hanged.

In Russia, when it rains on your wedding day, it means good luck, but in Lithuania, rain means that the bride will grieve many times during her marriage. This tradition might be the reason why most weddings occur during the sunny weather of August and September. (In olden times, most weddings were held in autumn and winter).

The Lithuanian Department of Statistics says that brides are on average 22 years old. Saleswomen at a Vilnius bridal salon confirm that young blushing girls come in more often than “older, more sophisticated ladies” (that is, those who are in their 30s). In Lithuania, these young ladies typically are marrying men one to two years older than them, although about 100 women a year marry men 11 years younger than them and about 800 people aged 60 years and over get married.

Most girls rent their wedding dresses which is a thrifty way to get dolled up for a day without plunking down a year’s salary. When about 46 percent of marriages in Lithuania end in divorce, it’s no wonder that girls aren’t purchasing their dresses.

According to the Department of Statistics, the classic 1990s Lithuanian divorce profile is the high school graduate who married in the month of August, was in his or her early 20s, lived in an urban area, stayed married for 10 years, and then parted ways in the month of October or November. According to statistics, you can improve your chances of a long marriage (happiness not guaranteed) by living in the countryside, having lots of kids, and getting only a basic education. In other words, keep it simple.

(By Catherine Belonogoff in Vilnius — The Baltic Times, 1997).