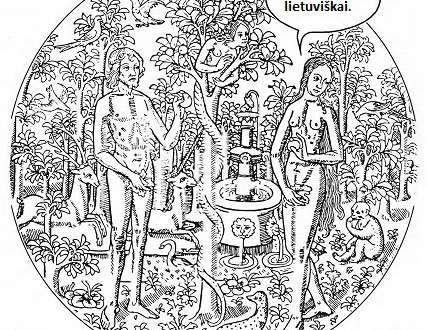 If not, then certainly Lithuanian was one of the languages heard at the Tower of Babel.

Did Adam and Eve Speak Lithuanian?

We often hear that Lithuanian is the oldest and most archaic European language still spoken today. We also hear that it is one of the most difficult languages to learn. Both statements are probably true.

The prominent Swiss scholar and great friend of Lithuania Professor Dr. Joseph Ehret once wrote: “Whoever meets a Lithuanian, encounters the ‘European Adam’”. Another scholar, the eminent master of linguistic research Professor Meillet, underscored this significant fact declaring: “Whoever desires to hear from human lips the echo of what once might have been the Indo-European language, must go and listen to a Lithuanian farmer.”

Long before Meillet, the great philosopher Kant had learned Lithuanian in Karaliaucius (Konigsberg, East Prussia), and understood it well. Also the widely traveled Alexander von Humbold had discovered it for his purposes. Goethe allowed it to resound in one of his musicals. Time after time Lithuanian as well as Latvian attracted the attention of the linguists who in the Baltic discovered an inexhaustible treasure for the disclosure of the lost European languages.

The Lithuanian language belongs to the Indo-European family of languages, which sometime around the 4th-3rd century B.C. split into ten or eleven separate branches. By 1000 B.C. these Indo-European languages had spread throughout most of Europe, and in much of southwest and south Asia. The Baltic branch was one of them. Some linguists like to lump the Baltic and Slavic languages into a single Balto-Slavic branch. More recent studies, however, have proven this to be incorrect. The Baltic branch is a distinctive and separate group of languages.

At the beginning of the Christian Era the Baltic tribes (Lithuanians, Latvians, Old Prussians, Jotvingians, Curonians, Semigallians, Selonians, and others) as well as the Slavs occupied a large area of eastern Europe, east of the Germanic tribes and north of the Iranians. This included much of present-day Poland and the western part of what used to be the Soviet Union. The Slavic part of this area was probably fairly small, perhaps centered in what is now southern Poland, while the Balts occupied the rest. But in the 5th century A.D. the Slavs began expanding in all directions, and now the Slavic languages are spoken over the greater part of eastern Europe and northern Asia.

The Baltic-speaking area, however, has contracted, so that Baltic languages are presently confined to the two countries of Lithuania and Latvia, in addition to about a million Balts living in countries of the West, other parts of Eastern Europe and Siberia (deportees).

For a time, the ancestors of the Lithuanians and Latvians spoke one language which began to split approximately during the 8th century A.D., and in the 13th century it finally separated into Lithuanian and Latvian.

The Old Prussians and Jotvingians were exterminated or assimilated by the Germans between the 13th and the 17th centuries, while the Curonians, Semigallians and Selonians, living to the north of Lithuania, were in turn assimilated by the Lithuanians and Latvians. All their languages and dialects have disappeared.

Because its dialects are more archaic in their forms than those of the other living Indo-European languages, Lithuanian is of particular im portance in the study of comparative Indo-European linguistics. Many scholars believe that the Baltic languages, and particularly Lithuanian, are closer relatives to the Indo-Iranian than to some of the other IndoEuropean branches. They say there is a great similarity between Lithuanian and Sanskrit, a now extinct classical language spoken in ancient India. It is also believed that there is a close relationship between Lithuanian and Greek and Latin, two classical languages of more recent origin. 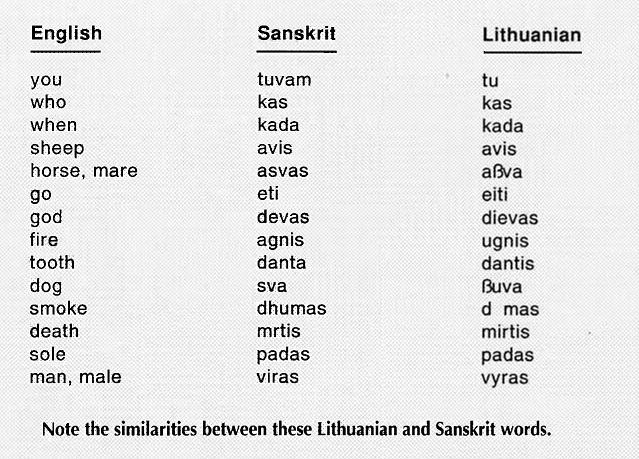 We would like to quote Professor Ehret when he says: “We do not know the original fathers of our stock, since they lived in the haze of prehistory hidden from our view by a thick veil. Yet through this nebulous wall we still hear their voice as a treasured legacy of a world which has been buried for millennia – the voice of the Indo-European primordial language. It resounds in the Sanskrit, in the prayer scrolls of Old-Indians, in the cadences of the classical legacy of the Greeks, in the echo of the Latin command of the Romans; and it lives in the speech of the Lithuanians. While the OldIndic is venerable and the Greek possesses a beautiful form, the significance of both and of the remainder of the old Indo-European languages is surpassed by the Lithuanian by the simple fact that it is still spoken today.

For the idyllically satisfied Lithuanian, coarseness is completely foreign. Thus his repertoire of swearwords is small and m oderate in expression. In the worst of cases, he calls his enemy ‘rupuže’, meaning a toad. Whoever wishes to swear in Lithuania – and throughout most of Eastern Europe for that matter – employs the explosive Russian vocabulary.

Powerful in composition in musical sounds, the ancient forms and the autum n freshness of Lithuanian, direct the attention of the educated, far surpassing the circle of linguistics, toward these sounds. Such persons have lavished praises on this language w hich so u n d s like declarations of love. One has only to listen to the u tteran ce of the learned Frenchman Re­ cius: ‘If the value of a nation in the total sum of humanity were to be measured by the beauty of its language, the Lithuanian ought to have the first place among the nations of Europe’.

This language conveys a warmth as if it had just emerged from its mother’s womb. Due to its nearness to nature, Lithuanian constitutes a type of language from which the majority of its Indo-European sisters have long since distanced themselves. Indeed they still reflect the influence of nature, yet for the most part they have lost the spontaneity of nature’s children. As typical examples, there is English with its preference for one and two-one syllable words, with its lack of inflection and the rigidity of its adjectives; and French which increasingly subscribes to its abstract substantives.

Within the circle of such idioms, crippled apparently by the pallor of thought, Lithuanian is marked by its affinity to nature. While our modern languages reveal what we have acquired through their changes, the Baltic languages reflect what we have lost. Thus it is worth our while to turn our glance to this ‘linguistic paradise’”.

The Lithuanian language is enormously rich in folk songs (called Dainos in Lithuanian), riddles and proverbs. How inexhaustible this treasure is, can be indicated by the fact that until 1938, approximately 112- ,000 song texts, 13,000 melodies, 34,000 riddles and 49,000 proverbs were collected by linguists. Since written Lithuanian did not appear until comparably late in history, many of these songs and proverbs were passed down from generation to generation. The great German poet and dramatist Goethe was so impressed with the Lithuanian Dainos that he acclaimed them as “flowing directly from the people who are closer to nature and thus to poetry than the rest of the world”.

“(Dainos are) flowing directly from the people who are closer to nature and thus poetry than the rest of the world”. — Johan Wolfgang von Goethe

The proverbs and riddles indicate not only a healthy human understanding and a keen insight, but also an amused attitude which is more tolerant than injurious; it accompanies all the activity and resignation, the folly and stupidity of man. For example: “God gave teeth, he will also give bread”, or, “With lies you will go around the entire world, but you will never return”, or, “One’s own tears are bitter, while the other’s are only wet”, or, “A woman is not a sleeve, you cannot turn her inside^put”. From now on, when someone comments: “a famous Chinese proverb says…”, you just reply: “yeah, but a famous Lithuanian proverb says…”

Quite a few Lithuanian words have been borrowed by other languages. How about English? Well, in 1959 an American linguistics journal published an article, in which it was suggested that sometimes in American English the verb schwump is used, the origin of which is the Lithuanian svampti (to smoke a pipe slowly, with relish). Lionginas Pažusis, a noted Lithuanian scholar of English, comments: “It is not clear yet if it has spread widely into American English usage, because it has not been possible to come across traces of this borrowing from Lithuanian in any other sources. In the meantime, one might modestly suggest that America gave us the tobaccopand our (the Lithuanian) countrymen, to repay her, lent a picturesque verb telling them what they can do with that tobacco”. 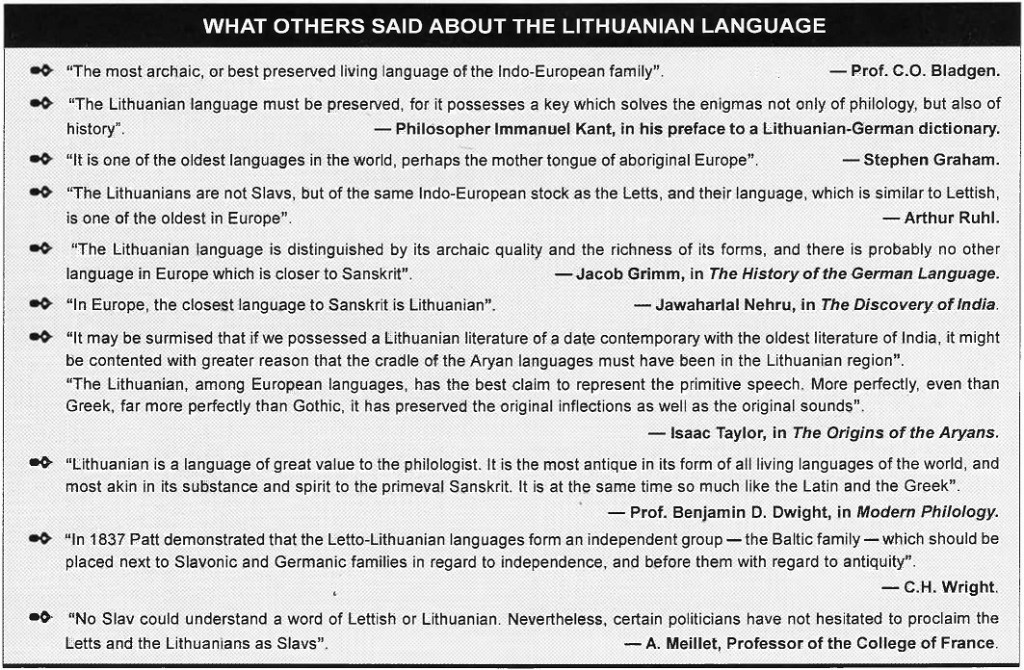 Next The Great Families of Lithuania