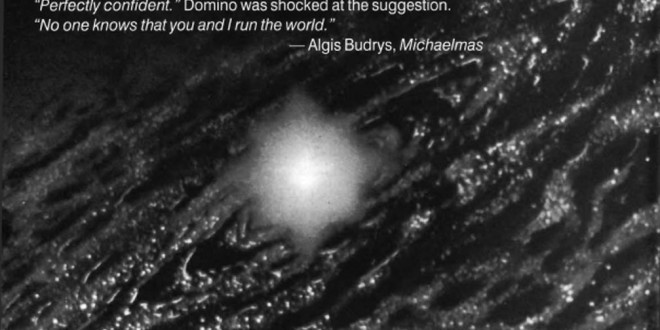 He was again looking out at night-softened Manhattan. “Are you still confident that no one has deduced our -ah- personal dynamic ? ” “Perfectly confident.” Domino was shocked at the suggestion.  “No one knows that you and I run the world. — Algis Budrys, Michaelmas

Science Fiction deals largely with the future, but the present is looking well for it too. The SciFi rack at the bookstore has grown as big as the Romance section. “The X Files” and “Starship Troopers” play to vast visual audiences. Veteran SciFi fans like to point out that advances like the desktop computer and the Internet were convincingly brought to life, years ahead of their time, in prophetic works of SciFi. The genre’s profile, almost nil until a generation ago, has never been higher. 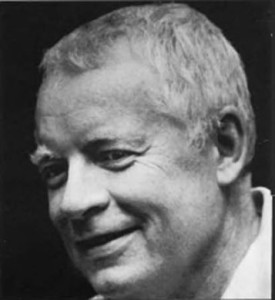 Why Science Fiction took so long to catch on is anyone’s guess. As an art form it dates back to Englishwoman Mary Shelley’s bombshell 1821 novel Frankenstein, but SciFi remained unfashionable across the Atlantic for almost a century and a half. Strange too is the fact that SciFi’s slow coming of age pivoted on the phenomenal commercial success of a merely good 1977 movie. “Star Wars” became the top grossing film in history to that point, presumably on the strength of its special effects. There’s no question, however, that SciFi annals cleanly and correctly divide into pre- and post-“Star Wars” eras.

Unquestionably, the best and the bulk of Algis Budrys’ work falls into the pre-“Star Wars” stage. In a twenty-five year stretch beginning in 1952 the longtime writer/editor authored nearly two hundred books and stories. Worldwide sales of the former (see next page for sketches) totaled hundreds of thousands. That’s an astonishing number in an age when SciFi magazine circulations were struggling to reach four figures. The quality of the output helped Budrys accumulate numerous Hugo Award nominations — SciFi’s Oscar — across most of the ’52-’77 span, but he’s primarily identified with the top writers of his earlier years. That small, underappreciated ’50s group is usually credited now with laying the foundation for what would follow with solid, more upbeat writing than that typifying the 1930s and ’40s. Slotted as an American pioneer, Budrys’ place in Science Fiction history seems secure.

Fascinating as much of his writing may be, his narration of the family history comes close to upstaging it. His father Jonas was a dashing figure in his earlier years and rather a man of mystery in his prime after settling into Lithuanian diplomatic circles. Originally picked off a farm by the Tsar’s army, Jonas had been stranded in Vladivostok and put out of a military intelligence job by the 1917 Communist revolution.

Having worked his way home with armed groups over basically lawless land, he was appointed head of intelligence by the government of newly independent Lithuania. He was instrumental in the liberation of the Klaipėda territory from the French in 1923, and served as its governor until 1925. According to the Lithuanian Encyclopedia, between 1927-1928 Jonas was adviser in the Lithuanian Ministry of the Interior and later served in the Ministry of Foreign Affairs. From 1928-1933 he was Lithuanian Consul in Konigsberg, and from 1933-1936 was Consul General in East Prussia. The son maintains that Jonas later may have done intelligence work in conjunction with his diplomatic job, which required worldwide travel to the various consulates. This, of course, would be difficult to verify.

By 1931, more definitely, Jonas had married Regina Kašubaite and fathered a boy. Algirdas Jonas Budrys began attending kindergarten in Konigsberg, but deteriorating relations with Nazi Germany encouraged the father to transfer with his family to New York City where he assumed the job of Consul General of Lithuania. Algis recalls the family moving twice during his four subsequent years in “The Big Apple”, relocating each time to a neighborhood of lower stature. Lithuanian money seemed to be growing tight. As it turned out, Lithuanian reserves in U.S. banks would keep the diplomatic offices open even after the Soviet annexation of Lithuania in 1940. But the household cash flow wasn’t enough to dissuade Jonas from buying a Dorothy, New Jersey chicken farm, and dispatching his wife and son 110 miles to run it. Algis had acquired an interest in Science Fiction and written his first story by the time of the New Jersey move.

Algis proved to be an unmotivated student in Dorothy primary school, a three room/nine grade affair, and continued the trend at nearby Vineland High School. English was easily his best subject; Physics and Chemistry were a part of the more dismal big picture. “A famous scientist I met [later] once told me, ‘Budrys, you’d make a lousy scientist’”, Budrys says now. “And he was right. I like science, but more in the way of admiring what they can do with it rather than what /can do with it”. He professes only a utilitarian interest in science as it relates to his work, declaring allegiance to the people branch of SciFi writers dating back to Shelley, as opposed to those who’ve followed the lead of 1860’s Frenchman Jules Verne and his emphasis on machinery. One assumes the latter were better in science class.

Happy just to have graduated Vineland at sixteen, Budrys authored his most persuasive piece of writing to that point, impressing the University of Miami Florida admissions department enough with an application letter to admit him. He was a virtual baby among the returning combat veterans in school under the G.I. Bill. His nonEnglish grades continued to lag well behind. He did odd jobs to help his parents pay his way, but after two years the money at home ran out. Budrys is sure that by this time his father was subsidizing a number of relatives recently emigrated to the U.S.

Still only eighteen, he returned to the New York area and worked a number of menial jobs as three more years passed. He cooked, washed dishes, helped build the infamous Levittown subdivision. Faced with a limited science fiction market, he added to his self-written collection of SciFi stories in his free time. The parents, seeing little long term benefit in any of this, urged him to continue his education.

Consequently, at his own expense he enrolled in Columbia University night school in 1951. There he received the best grades of his life, all A’s and B’s. Doubtless the parents were encouraged. But their dreams of a college degree and a mainstream livelihood for their son were not to be: Algis had his own vision, and in his five off-and-on college years the state of Science Fiction literature had begun to improve. Fantasy and Science Fiction (1949- ) and Galaxy (1950- 80) started long runs as magazines, following John Campbell’s lead at Astounding Science Fiction (1930-).

“Many of the [SciFi] magazines from the ’30s and ’40s had gone out of business,” Budrys says of the early ’50s scene. “They had never gotten it quite right. John Campbell, on the other hand, did.” A trained physicist and a successful SciFi writer himself, Campbell had assumed editorship of ASF (now Analog) in 1938. Having hit his editorial stride by the ’50s, Campbell would discover and nurture names that are legend today. Budrys recalls the thrill of meeting some of the others in Campbell’s New York offices. Heinlein. Dick. Sheckley. The editor may have been more historically significant than any of them, Budrys feels, because he had developed the abilities to gauge reader taste, recognize good writing, and work with writers to polish their submissions. Which, taken together, could be more difficult than writing itself. Regardless, all very quickly in 1952 Campbell bought “High Purpose”, Algis sold several more stories from stock, and Columbia lost a night student. He was, as they say in aeronautics, launched.

As time went along and the writing credits piled up, he would move to Chicago in 1961 to take an editorial position with Regency Books, raise four sons with wife Edna, write a highly regarded book review column for Galaxy, and attain U.S. citizenship. Today he continues to serve as a mentor in the L. Ron Hubbard Writers of the Future program and occasionally guests at one of the country’s many Science Fiction conventions. “Hard Landing” (1992) was his last published book, and he currently considers another. He’s still looking, not very hard, for one of those elusive Hugo Awards. He smiles when reminded of the beginner’s luck of Ed Meškys and Niekas magazine, which despite only a brief run in the mid sixties received a Hugo. “Now what did Americans make of that?”, he wonders, referring to the publication’s name. Since “niekas” is Lithuanian for “nothing”, that would be the perfect answer to his question. But Niekas is history; for writer Budrys the future’s the thing. And in a Science Fiction icon, that seems totally appropriate. 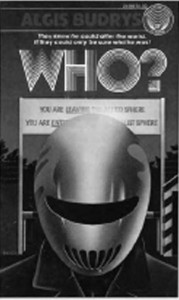 Want to give Budrys a read? His twelve books can be hard to find, like those of many past Science Fiction masters. So it’s not a bad idea to focus on his most outstanding works. That would be, according to the critics, the three titles listed below. The reader might wish to try the local public library, where this writer obtained each of the three.

WHO? (1958) Top-level American research scientist Luke Martino is badly hurt in a lab explosion in a town bordering the Iron Curtain. The Soviets, having sifted through the rubble first, return someone claiming to be Martino. But the man has had his head and left arm replaced with prosthetic devices, and Western security is not convinced of his identity. A scientific career and a vital defense project hinge on the outcome. Who? lost some of its original impact with the dissolution of the Soviet Union and the end of the Cold War, but retains considerable appeal as a mystery and character study. The book was made into a so-so British film of the same name in 1974.

ROGUE MOON (1960) One after another, astronauts entering a structure of unknown origin on the moon have all wound up dead. With deep reservations the aerospace people enlist a fearless troubleshooter with secret service experience to help them solve the riddle. The characterization work here is extremely thin, but the memorable plot has raised the book to cult classic status and carried it into the American Science Fiction Writers Hall of Fame. 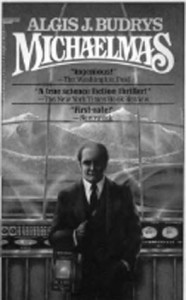 MICHAELMAS (1977) Laurent Michaelmas, globally recognized television journalist but secretly an engineering genius as well, has built an intelligent talking computer capable of transferring data to or from virtually any networked computer in the world. He and “Domino” benevolently influence world events, stabilizing an economy here, discouraging a war there. They sense a forthcoming challenge to their control, though, when a recent space shuttle explosion fatality reappears, healthy and intact. The duo ranges from the U.S. to Switzerland to North Africa to find out more. Michaelmas is generally considered Budrys’ masterpiece, and certainly surpasses his earlier works in terms of literary style.   T.G.