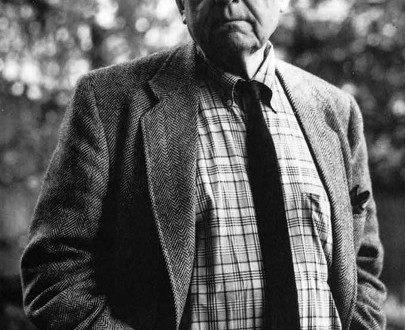 One of the greatest poets o f our time — who regards his boyhood home as the center of his world, and Vilnius as the most astonishing city — reveals some private thoughts about his heritage and the land o f his ancestors.

The famous Polish poet and winner of the Nobel Prize for Literature, Czeslaw Milosz, celebrated his 90th birthday a couple of months ago. On that special occasion the Vilnius City Council conferred him the title of “Honorary Citizen of Vilnius. ”

Milosz, who resides in Poland, France, and the United States where he still teaches at a university, was born in Šateiniai, Lithuania, and studied at Vilnius University before emigrating to the United States after World War II. He has visited Lithuania several times, and his ancestral home in Šateiniai has been converted into an international cultural center.

The following article was written by Albert Cizauskas in 1984, when Lithuania was still in the grip of the Soviet Union. But the thoughts and ideas expressed in it are ju st as valid today as they were then. We present it here as a tribute to the great poet.

SOME TIME AGO, The Washington Post published an article by a Polish-American woman who bemoaned her sense of inferiority in a predominantly AngloSaxon culture. To compensate, she recalled some figures of world stature in Polish life. Typically, she listed three as Poles whose heritage is Lithuanian: Kosciusko, Sienkewicz, and Milosz.

For Lithuanian Americans, this frequent assumption of prom inent Lithuanians as exclusively Polish is cause for both irritation and self-congratulation. The latter two of the trio are Nobel Prize laureates in literature; the first is a major hero of the American Revolution who also led Lithuanian and Polish forces in a gallant but unsuccessful attem pt to prevent the extinction of the old Polish-Lithuanian Commonw ealth. All acknowledged their Lithuanian heritage.

Czeslaw Milosz, a contemporary, claims descent from a Lithuanian family of minor landed gentry, one mixed with Polish and German blood as is often the case in that part of Europe. He has many interesting, beautiful, and ultimately frightening things to say about Lithuania in two of his most direct personal books, Native Realm and Captive Mind. These are not autobiographies in the ordinary sense; they are more like St. Augustine’s Confessions, tracing the spiritual and intellectual journey of a gifted and deeply sensitive individual from an ironic tolerance of Communism to a thorough disenchantment with the system which he condemns as a “stupefying and loathsome phenomenon.”

Milosz acknowledges that his family, living in the Vilnius region which was occupied by Poland after World War I, was inclined to sympathize with Lithuania and practiced a “cult of separatism” similar to that of the Scots and Welsh in Great Britain. Still, like most of the gentry and nobility in Lithuania, the Milosz family employed Polish as its first language and the Nobel laureate’s works are all in Polish. Nevertheless, he says, his family tended to regard Lithuania as “better” and Poland as “worse.” At one point, Milosz asks rhetorically in Native Realm: “…what would she (Poland) have accomplished without our kings, poets, and politicians?” Milosz of course is referring to Poland’s illustrious dynasty, the Jogailas, Lithuanian kings who gave the Polish-Lithuanian Commonwealth some of its greatest history. As to poets, the Poles accord Adam Mickiewicz, also a Lithuanian, first rank among poets writing in Polish. Mickiewicz’s epic, Pan Tadeusz, bears the sub-title “The Last Foray in Lithuania,” and opens with a lovely panegyric on Lithuania. Among politicians, the Lithuanian Prince Czartoryski, a scion of the foremost noble family in the Commonwealth, was an intimate friend and foreign minister to Tsar Alexander I of Russia, one of the victorious allies against Napoleon. In his position, the Prince pleaded at every opportunity, albeit vainly, the cause of the Commonwealth. In more recent times, it was Marshal Pilsudski, also a Lithuanian, who prevented the Bolsheviks from taking over Poland after World War I and went on to serve as Poland’s most notable leader in the inter-war period. The list could go on indefinitely in all fields, military, literary, and political.

Of the place of his birth, Milosz writes with feeling: “The first sunlight I saw, my first smell of the earth, my first tree, were the sunlight, smell, and tree of these regions; for I was born there, of Polish-speaking parents, beside a river that bore a Lithuanian name.” He explains: “The river Neman (sic), not far from its mouth on the Baltic Sea, is fed by several smaller tributaries flowing from the north… It was on one of these tributaries … that all my adventures began… There is an abundance of lakes and forests… The latter contain a number of oak trees, whose role in pagan mythology was, and in my own personal mythology continues to be, so important…”

Milosz also speculates on the hidden forces that impelled some people and not others to organize themselves into states. For example, he says that the Teutonic “…order subjugated Prussians and Letts, but it could not put down the Lithuanians, who were linguistically akin to these two groups.” Instead, the Lithuanians resisted the encroachm ent of the T eutonic Knights, and even of the Poles, on their west, “…all their expansionist thrust was directed toward the East … and thus arose one of Europe’s strangest political organisms: The Grand Duchy of Lithuania.” At its zenith, the Grand Duchy, Milosz notes, was immense and for a long time neither the Germans nor the Muscovites could compete with it “…but the small Baltic tribe that lent its name to the Duchy did not attempt to impose its ways on those who recognized its suzerainty.”

In speaking of the language, Milosz states that Lithuanian (along with Latvian) constitutes a “…linguistic riddle; no one knows the original home of these tribes who found their way to the lower reaches of the Nieman and Dvina rivers.” In time, German and Polish influences took hold with the local nobility but “The common people … spoke their native tongue and preserved their cultural heritage from a legendary past.” Again, in the 19th century, “…German scholars discovered that [Lithuania’s] peasants speak the oldest Indo-European language, which is in many respects akin to Sanskrit.”

Milosz also sheds interesting light on some of the educational prejudices to which he was subjected in the Polish schools of the Vilnius region during the inter-war years. Jogaila, for instance, “…who initiated the union of the two states, was presented as a noble personality, while his cousin, Prince Witold (Vytautas), who tried to maintain Lithuania’s autonomy, was treated as a malicious troublemaker.” In literature, “…the only writing worthy of attention was in Polish. Nothing was said about the rich and beautiful Lithuanian folklore, although the pagan past survived in it; or about the eighteenth century Protestant pastor named Donelaitis, who composed a poem in Lithuanian hexameters, The Four Seasons of the Year which is interesting to compare with The Seasons, by his contemporary James Thomson.” Milosz notes, however, that similar prejudices were also prevalent in Lithuanian schools, only in reverse.

At the heart of Milosz’s antagonism toward the Poland of the inter-war years is his revulsion against its “…contempt for a nation (Lithuania) ninety-nine percent of which was peasant.” This emotion is vividly described by Milosz when* he contrasts the atmosphere of the Lithuanian Legation and the Polish Embassy during his days in Paris: “The Legation — quiet, peaceful, and democratic — was, despite the different language spoken there, somehow more pleasant than the Polish Embassy, where, even as you entered the lobby, your nostrils were assailed by an odor of contempt for anyone deprived of social prestige. To tell the truth, I hated the fools, ingratiating to foreigners but impolite, even downright boorish, to their own citizens.”

One of the more revealing insights into the Milosz family’s sentiments toward the two countries comes from the Nobel author’s recollection of an older relative, Oscar Milosz, who had become a celebrated poet in French and a bon vivant. Oscar deliberately chose the Lithuanian cause after World War I and became a member of the first Lithuanian mission to the League of Nations, arguing with Polish diplomats against their country’s illegal seizure of Vilnius. A grateful Lithuania offered him the position of Foreign Minister but for reasons of his own he did not accept it. Czeslaw believes that Oscar’s aristocratic instincts made him a passionate defender of Lithuania’s peasants against the “gentry traditions” of the Poles. The peasants, in Oscar’s view, were the “…true founders of the Grand D uchy…” Because they were “victimized by various colonizations,” Oscar dubbed the Lithuanian peasants the “Redskins of Europe.” In a touching aside, Czeslaw recalls that Oscar’s gravestone in Fontainbleau “…where unknown admirers of his poetry often place flowers, bears his name in Lithuanian (‘Milašius’).”

Perhaps the most striking comments by Milosz are his views on the brutal incorporation of the Baltic states into the Soviet Union. Despite a long period of “careful education” under what the Nobel Prize laureate euphemistically calls the “Center,” most Lithuanians, he asserts, would “…willingly cut the throat of any available Russian were they not restrained by fear.” Milosz warns that, while the occupation of the Baltic states may by ignored by the people of other countries, the act constitutes an extraordinary act of colonial aggression. For if the “Great U nion” is capable of doing this, he argues that other still independent countries may one day be swallowed up in their turn, undergoing mass deportations and forced colonization of their lands by the Russians similar to that suffered by the Baltic peoples. “The invasion of the Spanish must have been an appalling experience for the Aztecs. The customs of the conquerors were incomprehensible… the paths of their though, impossible to follow. The invasion of the Red Army was no less a shock … for the Lithuanians… O f course, the older people remembered the days of the Tsars; yet this was completely different; and much worse.”

It is chilling to read Milosz’s account of the “…cattle cars loaded with the people of the Baltic states in the early years after World War II being shipped into the uninhabited areas of EuroAsia… The years in which Western Europe began to enjoy a precarious peace were far from peaceful for the Baltic countries.” He quotes an official of the “Center” as saying to him in 1946: “There will always be a Lithuania; but there will be no Lithuanians.”

Milosz should know where of he speaks. He himself had been an official of the Polish Communist government, serving in the Washington and Paris embassies. He broke with the regime in 1951. He now teaches literature at the University of California at Berkeley. I had the pleasure of meeting Milosz at the George Mason University in Fairfax, Virginia, in February of this year where he gave a reading of his poems. After the reading, I extended greetings to him in Lithuanian. Milosz responded in kind.