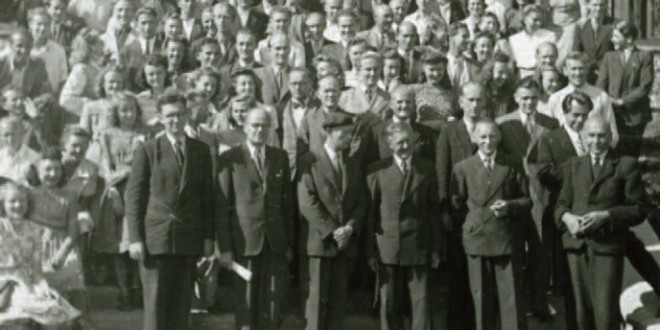 Students and faculty, 1948, Pinneberg. Professor Stanka is standing in front in the middle (with the hat or cap); on the right is professor Öpik, the Estonian rector. (VEMU archive, Toronto)

Who would imagine that refugees who had lost everything would create a university so soon after WW II in an almost totally devastated city? The story is not widely known, so I decided to make a documentary film about it: The Story of the Baltic University. At the beginning of my research I only had the small study book from the Baltic University, which I had found among my father’s papers. My father had passed away when I was still very young, so there was no possibility to ask him for information. People whom I knew who had knowledge of the Baltic countries had not heard about it, and there was little to be found on the Internet. Happily, Estonians of my father’s generation knew where to find information and some of them had been students at the University. I also tried to find Lithuanian and Latvian students who had attended, although it was not always easy to trace them. People from the three communities helped me with research and support. It was a joint effort. The Lithuanian ambassador in Holland, Darius Semaška, forwarded the names and addresses of people who might know more about the Baltic University. Very soon I received the name of Pranas Jurkus, a former student living in Chicago. He not only had gathered material about the Baltic University, but Mr. Jurkus had kept in touch with former students. Every year on the 14th of March, the anniversary of opening day at the University, he would invite them to a celebration. In this way, Pranas Jurkus and other former students kept the memory of the Baltic University alive – even after all those years, as it had been so important to them.

How it all started

Baltic University was created in the city of Hamburg shortly after the end of WWII by academics from the three Baltic countries. Postwar Germany at the time was divided into four occupation zones, the British zone being one of them, and Hamburg was in this British zone. Hamburg was so heavily bombed during the war that some British officials called it the Hiroshima of Germany. Most of the city had been destroyed.

One of the first texts I read about the University was written by Robert Riggle, an UNRRA employee who was involved in the organization of the Baltic University for two years. Before the war he had been a teacher at a university in Ohio and therefore knew how difficult it was to have a good working university even in times of peace and plenty. He was incredulous when he heard about the plan of the Baltic professors. “Frankly, I was aghast atsuch bravado. … I must make it plain that at this time we hadn’t a sheet of paper or pencil, nothing except the idea. I was immediately impressed with their courage and their will to survive and to achieve. … As an American used to an abundance of everything, their fortitude and above all their determination to go forward, was amazing.” In this text Mr. Riggle describes how the Baltic academics, all refugees, managed to establish a university in the city of Hamburg, where it seemed impossible to find housing, equipment, furniture or even lightbulbs.

The Hamburg History Museum, which was only partly damaged in the War, was given to the University for lectures. Two camps consisting of wooden barracks were given to students and staff for dormitories. The barracks were in bad condition, but at least there was a place to sleep. On the 14th of March, a couple of months after the academics of the Baltic Countries had first been given permission to create a university, the Baltic University opened its doors. It consisted of eight faculties with 17 departments. There was a lack of coal to heat the rooms, books were still missing and paper was scarce, but students and staff were eager to start learning once again.

One of the Lithuanian academics involved in the creation of the Baltic University was the famous law professor and barrister Vladas Stanka. He wrote to one of his friends in the spring of 1946, “And if you ask of us, how we are, then I would say: half-hungry, three-quarters shabby, and as a matter of fact, we should have been wholly hopeless. But we are not hopeless! … if the peace could be maintained, then one or another of our hopes will be possibly realized.” In the same letter he writes about the Baltic University: “… I’m even elected as Lithuanian rector. But this position is connected with too many troubles, and I decided to renounce it. I’m accustomed to live quietly: to dream, to write …” He wanted to dream, but realized that practical things needed to be organized. As soon as the British authorities together with UNRRA agreed about the creation of the Baltic University, Prof. Stanka wrote to the United Lithuanian Relief Fund in the United States, asking for help. In a letter dated February 1946, the director of the Lithuanian Relief Fund, Mr. Joseph Laučka, wrote that he had informed American, Latvian and Estonian organizations about the Baltic University, and that they were exploring ways to organize a special committee named the American Committee for the Baltic University. Very soon the first shipment of books arrived in Hamburg.

Prof. Stanka, though he initially refused the position, became the Lithuanian rector, then one year later Vice-President, and in 1949, President of the Baltic University.

The Baltic University started out with promise, but soon problems appeared: not everyone liked the idea of a university for students of the Baltic countries.It was felt that people from the Baltic countries could and should go home. The word Baltic was dropped from the University’s name, and it became the Hamburg DP (Displaced Persons) University. Viktor Lapatinskas, a former student, recounted in an interview about how Lithuanian Independence Day was celebrated in 1947: “On February 16 we were not allowed to celebrate. We couldn’t gather and celebrate in a big group. We were encouraged to celebrate in each group separately. Each room had a celebration, and the American and British officials went from room to room to congratulate us, but never in the entire group, as they didn’t want to upset the Russians, as the Russians were allies.”

By February 1947, the University had moved to Pinneberg, which was not very far from Hamburg, into former Luftwaffe barracks. This was actually a huge improvement as the large buildings available at the site were still in good condition. Every nationality was housed in one building, where they studied and slept and where they could organize some of their own activities. There was time for sports, dances and music. Student Pranas Jurkus organized a Lithuanian student quartet. Eugenijus Čuplinskas, a violin player, formed a trio with other students. Eugenijus wrote about his friendship at the University with Jonas Švedas, pianist and composer, and Kostas Ostrauskas, a baritone singer. Together they gave concerts in the Lithuanian students’ residence hall and also in nearby Lithuanian DP camps.

Aldona Šmulkštys, who studied for three years at Baltic University, remembered it as the most beautiful place she could think of: “We were young, we were very poor, the food was very bad, and we practically didn’t have anything. But this didn’t matter. We were idealistic. We believed in our future.” According to the Lithuanian students living together in Pinneberg, the atmosphere was one of being together in one big family. The Lithuanian professors lived in the same building as the students. Some of the faculty members were quite renowned. Pranas Jurkus remembers: “There were the three professors Biržiska; Viktoras, Vaclovas and Mykolas. You have to imagine that Mykolas was one of the signers of the Act of Independence of Lithuania in 1918. Such a person, such a personality, and then, at the Baltic University you lived in the same building, you were eating together, and you were talking with him.”

The staff of the University, who had hoped that the move to Pinneberg would mean that they could continue and expand their activities, faced a difficult struggle to keep the University open. Great Britain was in need of cheap labor, and in the spring of 1947, students were urged by British authorities to stop studying and to find jobs in England. Only a few students left. In the summer of 1947, the University staff received a message that fewer students would be allowed to study and that teachers had to be dismissed.

The rectorate understood that the future of their university would not be in Germany, and they had to look for other options. The United Lithuanian Relief Fund of America tried again to help. Rev. dr. Joseph Koncius travelled across the United States looking for empty farms, offices, buildings – a place where the University could move to. The idea was to transplant the whole of Baltic University to the United States. Father Koncius found an empty town called Quoddy Village, which seemed to be a perfect fit. A hectic period of meetings, discussions and correspondence followed. But all these efforts were in vain: the War Assets Administration did not accept the bid to move the University to the Village. Further attempts to move the University also failed, and slowly, students and staff started to emigrate.

For a time, lectures continued and the staff managed to keep the University open. But in November 1948, a caravan of lorries appeared suddenly at the gate of Pinneberg: students were to be taken away to other camps. Professor Stanka wrote in a letter: “We have had a rather stormy fortnight behind us: the fortnight of the desperate struggle for our existence … the existence of our university. … the lorries, which had to take away students, were already waiting, and the cause seemed to be hopeless. But then a miracle happened: the higher authorities came to Pinneberg, and after discussing the matter, we were allowed to continue our activities until October 1st 1949…”

Previous Parade in Chicago during Thanksgiving
Next Gliders on the Dunes: Gregorius Radvenis − Pilot and Instructor