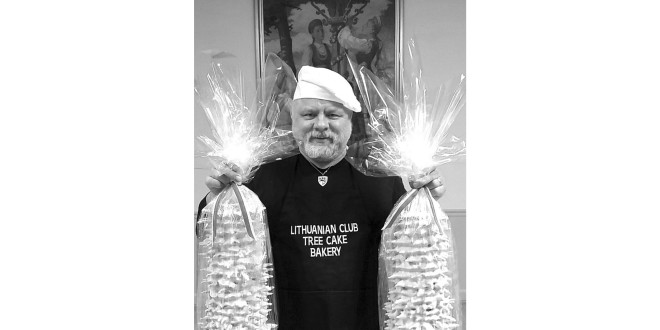 If you have ever been to a Lithuanian wedding, you were most likely treated to a Tree Cake, a towering conical confection with numerous rounded branches jutting out from its trunk. It is a cake that gives a Lithuanian family celebration loft.

The cake batter is made from a large number of eggs – 30 per pound of flour – as well as butter, sugar and cream. The thick eggy batter is poured onto a turning spit over an open fire or a very hot heating element. As the batter drips down toward the flame, it is quickly baked by the heat, and then rotated away from the flame so that it does not burn.

In the US almost every Lithuanian parish had a Tree Cake baker in the 1950’s. Many baked them in garages over large open flames, with nary a comment from the local fire marshall. Times have obviously changed: not only is this something you can no longer do in the comfort of your own storage shed, but also the number of bakers who have the necessary expertise to create these impressive cakes have dwindled to a handful.

Dainius Zalensas is one of a few in the US who keeps the craft of Tree Cake baking alive. He bakes at the Lithuanian American Citizens Club in Cleveland, OH, but his cakes are in such high demand,that he ships them around the world. He talks about his craft and baking experiences.

What inspired you to learn the Tree Cake craft?

For 20 years I worked in the import-export business selling electronics. In the fall of 2011, Rūta Degutienė, the director of the Lithuanian Club in Cleveland, OH, approached me saying that no one in Cleveland bakes Tree Cakes anymore. There used to be a man, who baked them in his garage and there was a young woman who baked them occasionally, but lately there was nowhere you could buy one on demand. Ruta looked at me and said: “You are a Jack-of-all-trades. Why don’t you do it?” I can now say: “Thank you, Ruta!” That autumn I embarked on a new career. I developed a business plan, I located a teacher in Lithuania and off I went to learn the secrets of the craft. While in Lithuania I purchased an oven and shipped it to CleveI f you have ever been to a Lithuanian wedding, youwere mostlikely treated to aTree Cake, a towering conical confection with numerous rounded branches jutting out from its trunk. It is a cake that gives a Lithuanian family celebration loft. Wikipedia says the cake became popular during the Polish-Lithuanian Commonwealth (1569–1791). Its origins are attributed to either the Italian Queen Bona Sforza or the Baltic tribe of Yotvingians. This assertion is often repeated on various websites, but its veracity is dubious. Some claim it has Germanic roots, because it is popularly called“baumkuchen,” which means “cake of branches,” however, the Lithuanian cooking method that gives the cake its distinct shape is not known to the Germans. What is known is that Lithuanians have been baking the cake atleast since the beginning ofthe twentieth century. It’s now called šakotis, which refers to tree branches. At one time it was called raguolis, which made reference to the“horns”ofthe cake. A TOWERING CONFECTION land. I remember the first cake I baked in the US— everyone in the bar at the Cleveland Lithuanian Club was dressed in green. It was St. Patrick’s Day, March 17, 2012.

You had to fly all the way to Lithuania to learn the craft? Yes.

My teacher was an experienced baker in a small Lithuanian town, who had been making Tree Cakes for 30 years. The first question she posed to me was: “So, what do you want to learn?” I was confused. I thought maybe there were several methods or different recipes. I shrugged my shoulders and she continued, “Do you want to learn how to make an authentic country-style Tree Cake or an inexpensive mass-produced one to sell?” I chose the authentic country-style version. Anything else would have been a waste of my time. I, for example, never appreciated poor quality beer, so why should I now learn how to make a poor quality Tree Cake? I even adapted the well-known Warsteiner Beer slogan:“Life is too short to eat cheap Tree Cake.” Everyone who orders a Tree Cake from our bakery can be assured that they will receive the highest quality product.

When I returned to the States I had to adapt the recipe to American measures and standards. During the first months there was a lot of trial by error, but once I got the recipe to my liking, I have never veered from it. Of course, making a quality Tree Cake depends on more than just the ingredients — the entire process is important from mixing the batter, to pouring it onto the spit, to drying the cake, to packaging it and finally sending out the order.

Are your cakes available beyond Cleveland?

Yes. From the very beginning they were available by mail order throughout the United States. Later I began to receive orders from Canada and now I am sending them all over the world. It costs about $6.00 to send our most popular middle-sized Tree Cake to closer postal zones and up to $13.59 to send them to California and Hawaii.

Do you decorate your Tree Cakes?

No, I don’t decorate them. Decorations can be damaged in transit, candy flowers can break, chocolate can lose its freshness or melt. I advise patrons to decorate the cakes themselves. Decorating ideas are posted on our website. Clients use our suggestions and even share photographs of their creations. Personally, I see no reason to dress up such a noble cake. It is beautiful as it is.

What was the most unexpected thing that happened to you while baking Tree Cakes?

There are several memorable moments. I remember at the very beginning I was still not used to the extremely sensitive speed-regulating knob. I wanted to reduce the speed, but a glop of batter fell on the handle and, instead of slowing down, the device began to turn four times as fast.I got flustered and didn’t react quickly enough. Eight small Tree Cakes which had been threaded onto the spit flew out in all directions like partridges startled by hunting dogs in a bog. My wife exclaimed, “What have you done?!” We had to scrape the unbaked little “cake princes” off the ceiling and walls. (In Lithuania the Tree Cake is often called “The King of the Cakes”) After we got our bearings, we had a good laugh.

Another time, while I was busy mixing a batter, my wife wanted to show me pictures of our grandchildren on her phone. She wouldn’t let up, “Come on, just take a quick look…” I lifted my head and said sternly, “Don’t bother me! Can’t you see that I’m talking to my BATTER?” Her eyes narrowed and she blurted, “Is your dough more important than me?!”

Yet another time, Cleveland’s most famous Lithuanian celebrity, BIG Z (former NBA player Žydrūnas Ilgauskas) was visiting the Lithuanian Club’s bar. I was baking at the time, so I quickly turned off the oven and ran out to give him a Tree Cake as a gift. Meanwhile my bakery was filling with smoke. Apparently I hadn’t completely engaged the off switch, and as a result I had to throw out a whole stack of burnt cakes. I now have something to remember when I look at my “expensive” photo with BIG Z!

Do you enjoy this work? Yes,

I like to cook. At home I am the chef. My wife only cooks when I am very busy. When I was studying this trade in Lithuania I took to it immediately. Tree Cakes are beautiful, delicious and impressive. I feel like I am creating a piece of art. I prepare and bake everything myself, while my wife gift-wraps and readies the cakes for shipping. She says that her job is to inspect the cakes and to add the final touch. She is my guardian angel.

Were there any memorable orders?

One of my best memories was making the acquaintance of Irena Andriuska from Argentina. She joined our Facebook group “Sakotis Baumkuchenas” and kept praising my Tree Cake photos. She commented that she still remembered the taste of the Tree Cake from during WWII and would like to taste it again. I made her wish come true – I sent her a Tree Cake to Argentina as a gift. She was overjoyed! She wrote me that she cried when she got the Tree Cake, and sent me a picture of her whole family with the cake. That was my most memorable delivery.

It is a pleasure to receive orders from far-away countries. A Japanese person found our website. He ordered a cake and sent a picture. The Tree Cake is well-known in Japan, but it is not like ours. It is more a traditional German baumkuchen without branches. I have sent Tree Cakes to Australia. France, Germany, Italy and Rumania. Not too long ago I sent a large cake to Westminster, England. Last year I was surprised to receive a few orders from Lithuania. They must really like my cakes, because to send the package overseas costs as much as the Tree Cake itself.

For Lithuanian Independence Day on February 16 I had the idea to send my own creation, a yellow, green and red (colors of the Lithuanian flag) Tree Cake to our Lithuanian Ambassador in Washington, DC. It was very nice to learn that it had been ceremoniously presented at the Independence Day commemoration in the US Congress Library. Such recognition warms the heart and encourages me to continue.

Where can we order your Tree Cake?

We send Tree Cakes worldwide. You will find more information at our website, www.lithuanianshop.com/ treecake. Write us by e-mail at Lithuanianclub@gmail.com. You can buy the Tree Cake in person at the Cleveland Lithuanian Club and the Gintaras (Amber) Restaurant 877 E 185th St, Cleveland, OH 44119.

Thank you for sharing your experiences. We wish you great success!

Previous “She manipulates sounds like a sorcerer”-MIRGA
Next Vladas Jakubėnas: From “A Remote and Lyrical Place”