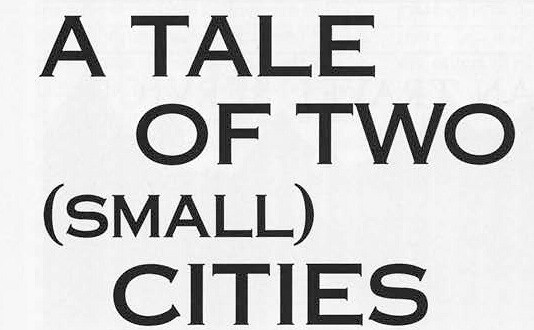 A Tale of Two (Small) Cities

Actually, when our story opens , one of these is just a charming town, the other — a picturesque village. The town is called Krantas, Cranz in German. Located at the spot where the Curonian Spit begins, 33 km by train from Koenigsberg (Karaliaučius, now — Kaliningrad), a favorite vacation spot on the Baltic seacoast. An upscale spa. It boasts a broad elevated boardwalk, wide clean sand beaches, several high-class hotels, excellent restaurants, and many colorful villas. There are Gothic-style churches, treeshaded streets, red brick sidewalks, and a profusion of flowers in the squares and gardens. Before the First World War even the Kaiser brought his family to spend several days here.

At the time of Cranz’s glory, Nida was merely a fishing village. True, a rather picturesque one, with high wander-dunes to the south, dry pine forests all around, and spectacular beaches. It was already recognized as a unique vacation spot, especially by artists and writers. But artists and writers are not wealthy as a rule, and there were just a few wooden villas where one could rent a room. In fact, aside of the small church, the post office, and school, all houses were of wood and most were roofed with reeds or straw. There was but one main street, as yet unpaved.

Let us now add a small detail which at the time seemed to be of little significance; in fact, most of the vacationers visiting either place were probably unaware of it. Namely, a few kilometers south of Nida ran the administrative border between the Memel (Klaipėda) County and the County of Koenigsberg. This fixes our reference time as some years before World War I. And, at least in terms of the relative economic conditions of the two locations, things do not change much until World War II.

Let us move the time now at a fast-forward clip to August, 2000.

Nida is no longer a simple fishing village. A few fishermen remain, but by now they have become part of the ambience, like the remaining fishermen’s houses. Most of these have been converted into quaint restaurants. There is a profusion of carefully tended flower beds, immaculate streets, and freshly-painted house fronts. The sidewalks are all resurfaced with colorful brick, all the plum bing has been renovated, and the public facilities are clean. It is an upscale vacation resort where care is taken to meld modern comforts with the illusion of past picturesqueness. Thus, the size and styles of houses is strictly regulated; no McDonalds or Pizza Hut facades are allowed to mar the pleasant vista of rustic house fronts, and even the new administration buildings are built in the style that incorporates traditional elements. There are some larger buildings by now, but these are set farther from the shore, beyond a screen of tall pine trees. The effort expanded in combining comfort and picturesqueness has paid off. N ida has become a successful international resort where more than half of the guests are from Western Europe. The prices reflect this.

Now let us board a bus and travel 40 kilometers south beyond the former county line which has now become the border between Lithuania and the Russian enclave of Kaliningrad. The proud resort of Krantas-Cranz is presently called Zelenogradsk, and it too has greatly changed. One stops at this point and is forced to search for words. Greatly?! Well, yes. Certainly that.

It is not an easy task to describe how the former Cranz looks today. To say that it has been neglected and has decayed could be a beginning of sorts, but only a beginning, To say that it is now a slum would certainly be true, but it would not be an adequate description. Slums are slums the world over. They are sad places, made at least partly bearable by the fact that they are usually enclaves. Islands of decay in an otherwise functioning environment and society. Zelenogradsk is different. There is no discernible functioning society anywhere in sight. The slum starts at one end of town and does not end at the other. It doesn’t, because the next town is a slum as well.

In a sense, Zelenogradsk is a sadder town than the dismal city of Kaliningrad itself. The Koenigsberg which stood on the shores of the Pregel was bombed into the ground during the war, the fragments that remained were razed in the postwar years, and a Soviet-Russian city of gray crumbling concrete was built in its place. KoenigsbergKaraliaučius is indeed gone and now there is just Kaliningrad. A dreary Soviet-Russian city of concrete like many others. There is no past there to confront and accuse the present.

Zelenogradsk is different. Cranz was not bombed and there was no intense fighting in this region during the war. The Russian population which moved into the villas of the displaced Germans took them over intact. At that time the streets were well-paved, the gardens tended, the southward-facing verandas of the villas were glazed, the tiles of the gabled roofs shone red, and multicolored flowers grew in window boxes.

That was then. Now the shattered windows of the verandas have, for the most part, been replaced by plywood or soggy cardboard, the walls of the stately villas are cracked and marred by graffiti, the tiles of the roofs are broken, with gaping holes where they are simply missing. Grass and small birch saplings grow in the drainage gutters. Some time ago, it must be several decades now, asphalt had been poured over the cobblestone streets. Most of it is gone by now. Between the ragged patches of the surviving asphalt the old cobblestones have re-emerged. Probably at the same time the sidewalks were paved with concrete tiles. But these were Soviet tiles, made to crack the moment they were laid down. By now they are not just cracked — they are shattered. Simply pulverized in places. We were there on a rainy day and puddles, some ankle-deep, took up a good part of the sidewalks.

This sad litany could be extended, but it would still fail to convey the complete dreariness of the place. Probably the saddest aspect of all was the mute evidence of abandoned building projects and stalled restoration efforts — evidence that at some time after the collapse of the Soviet Union there must have been a glimmer of hope in Zelenogradsk. Especially notable is a large, boarded-over building right on the seashore, which exhibits pretensions of a modern tourist hotel. Several of the larger villas are still covered by weathered scaffolding. But there does not seem to be any work going on, and the abandoned buildings are being used as trash dumps. In the front of one of these there is a concrete statue of Lenin which had been once painted silver. The silver paint is peeling in large flakes, the concrete is cracking, and one side of Lenin’s nose has been hacked off.

To add a human touch to this cityscape let us visit a restaurant. It is a cavernous vaulted place on one of the main streets. Seems to be operated privately now, but the fish smells strange and is uneatable; the beer, though imported from Lithuania is flat, the Coca Cola is just brown dishwater. To be fair, the soup is not bad. The restaurant is empty except for a party of middle-aged women who have pushed some tables together and occupy an entire corner. On the table, among various nondescript food items we count four bottles of vodka. 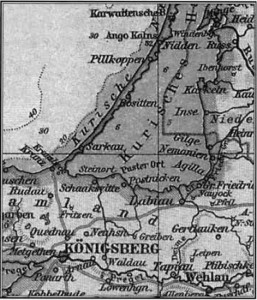 Such is the present condition of Zelenogradsk as seen by a day-tripping tourist from Nida. Price of the ticket is $2.50 from Nida to Zelenogradsk, $0.85 from Zelenogradsk to Nida (the price difference is illustrative). Time of actual travel is forty five minutes, though it becomes about an hour and a half because of formalities and hassle on the Russian side of the border. That is the distance in time and money. The psychological distance seems to be infinite.

A tale should have an ending. This one does not. And that, in an important sense, is the principal reason for relating it. The short trip from Nida to Zelenogradsk is just one more illustration that the situation in the Kaliningrad region is not yet settled. The progress that Nida has made in the decade since independence and the glaring contrast which this has created serves to emphasize this fact. The people of the Kaliningrad region, at least those that have the capability to perceive, certainly see this as well. It is a mistake to presume that they will remain docile and not act in their own interest because “Russians are different.” Russian immigrants have amply shown that, given the chance, they strive for the same goals as everyone else. This should also prove to be true in Kaliningrad. They will want to be part of the prosperous Europe that is being re-established all around them. The inhabitants of Zelenogradsk have the added incentive that they can still see, however dimly, that once they did not have to cross borders in order to reach the civilization and comforts of “Europe.” It was right there where they presently live.

Just how they will rejoin Europe will provide the ending which this presently lacks.