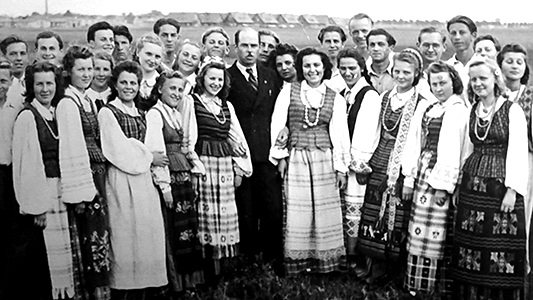 Mary Umans Jakubauskas’s first feature-length documentary film on the Lithuanian DP experience is nearing completion. Her film consists of numerous interviews with Lithuanian Americans. They as children fled Lithuania with their parents in 1944 in the final stages of WWII. Now, adults, her subjects recall what it was like to grow up in DP camps in post-World War Germany. They faced a host of concerns including finding a permanent home. Incorporating historic film footage and photographs, animation, and eye-witness descriptions, Mary Umans Jakubauskas brings this difficult and traumatic chapter of Lithuanian emigre history to life. The film, Displaced, is scheduled to be released in 2018. The filmmaker here speaks candidly about her motivations and the processes of tackling this challenging cinematic undertaking.

Displaced, a film project which I am producing, harkens back to a time when Lithuanians along with many other Eastern Europeans had to leave their homeland. They faced death or deportation during the tyrannical rule of Joseph Stalin. It is a story of survival, a story which is rarely noted and not often told.

I became aware of this history through friends at the Lithuanian Club in St. Petersburg, Florida. My husband and I are snow birds and have been coming to the club for many winters. My husband’s parents had lived in Florida and for 25 years enjoyed living there. It ought be noted that I’m not Lithuanian, my husband is. I am half Italian and the other half was misstated as Russian until I set the relatives and the record straight, “Riga is not Russia; we are Latvian.”

I discovered cepelinai, koldūnai, kugelis, and dark rye bread! My new friends were patient with me. Languages aren’t my strength and Lithuanian is a challenge. We visited Lithuania in 2000. Cousin Laura, only 17 at the time, was assigned as my interpreter during our stay in Kaunas. In 2006, we returned for her wedding. It was a multiple day affair which included charades where a play-acting “bride” and “groom” attempted displace the real bridal party by taking their seats at the head table. Libations in sweets eventually cleared the way for the bridal party to assume its rightful posts. The following day, the matchmaker was apprehended and charged with misrepresenting the achievements and wealth of the groom and was thus threatened with a “lynching” by the outraged village folk. The single women provided vodka and candy to obtain the matchmaker’s “release” which was confirmed by the bride’s ultimate reprieve and all was forgiven. The take away—Lithuania: what a beautiful country! What warm and pleasant people! Back in Florida friends I made at there slowly shared their stories about the terrifying times they experienced at the end of World War II. Particular stories which were related to me were but individual shards of the massive Armageddon, which impacted Lithuania, its neighbors Latvia and Estonia, as well as other countries in Central and Eastern Europe.

George spoke of how his family fled in a horse-drawn carriage with his father’s favorite stallion tied to the back. At Klaipėda, the horses were abandoned, tied to trees, while the family escaped by ferry. As a four-year-old, he watched the horses break from the trees and drown in pursuit of the boat. At the same age, Alfonsas and his mother, hiding on a hill in a forest, watched as terrified, screaming people were taken from trucks and loaded into trains. The trains were headed for Siberia. These events occurred some 70 years ago, but the scars remain. 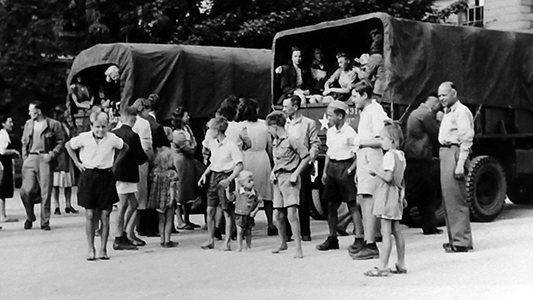 NOT MISSING THE STORY

How did I miss this story? The nightmare of Nazism is well documented, it is pervasive in the print and electronic media. As it should be. The atrocities of Hitler should not be forgotten. However it is now time for the heinous crimes of his “twin” Joseph Stalin to be documented and condemned as well. It is a tragic history that should be an integral part of the narrative when we recall that war. It certainly should not merely be relegated to the  parochial confines of the refugee communities that experienced it.

It has been a long journey making the film, Displaced. When I retired a few years ago, I went back to school to study documentary film. I believe in history from below, that is history from the perspective of those who lived it, not those in charge who wrote the texts. My student short documentary met with some success and I looked forward to making a full-length feature.

The more I heard about the horror of the Lithuanian displacement, the more I knew this had to be the subject of my next film. It is a subject relevant today as immigration concerns and Russia are routinely in the news. Putin has worked to whitewash the deeds of Joseph Stalin, and Russia remains a constant threat to the Baltic states. It became clear to me that these stories had to be told. As George Santayana, the philosopher, said “Those who do not remember the past are doomed to repeat it.” 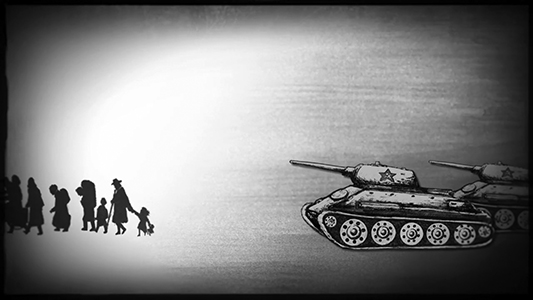 As one of the witnesses, Father Gus, noted, those interviewed for the film are at the forefront of these memories. This is the last generation which lived through those tragic times. When the representatives of this generation are gone, there will be no more primary source witnesses to provide first-hand accounts of this history and confirm its veracity.

Numerous interviews were conducted, resulting in hundreds of hours of raw film footage. With each story, the significance of these events was reinforced. Not every story or person could be included in the final cut. Yet, each personality and tale was so compelling and informative that it was difficult to focus in on what worked best to tell the story. The goal was to tell a story relatable to those who lived it and informative for those who didn’t. Because it was film, it was necessary to have the stories seen as well as heard. There was a trip to Washington, DC to access the contemporaneous newsreels from the time. Other archives were researched. The British Pathe has great footage of the war and refugees. Historic Films provided actual footage of people in displaced person camps living in barracks with only makeshift curtains providing privacy and separating one family from the next. Through the Lithuanian Research and Studies Center, based in Chicago we found a large collection of photographs about life in the camps. Our interviewees gladly shared their own pictures with us as well.

Still the story remains complicated. How does one present the overreaching history from a series of personal stories? Animation was used to give life to maps and depict other actions. Music and sound effects added an additional dimension to the production. Ancient Lithuanian folk songs and dirges sung by Algutė and Milda further highlighted the narrative.

The film is almost finished. The goal is to have it completed for the 2018 centennial of Lithuania’s independence. Keeping that goal in mind, we hope to raise awareness about our project Displaced and obtained the needed funds to finish it. We’re accessible to social media. Please visit our website. Our Facebook page has postings from around the world. There is also a fiscal sponsor, IFP (Independent Film Projects), which makes it easy to give and contributions are tax deductible. We invite you to share our story and join in this vital project.

YOU MAY DONATE through our fiscal sponsor: http://fiscal.ifp.org/project.cfm/695/Displaced/

Previous Setting the table for Kūčios
Next It began in Vermont. Village Harmony goes Lithuanian