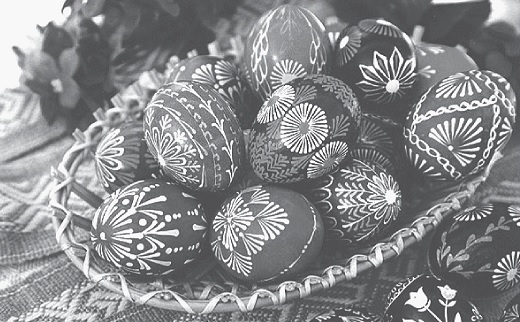 FROM GOOD FRIDAY UNTIL THE RESURRECTION devotions, the Church’s bells during Masses are silent, replaced at the Consecration by the dry, solemn rattle of the wooden clappers. But on Easter morning, in joyous celebration of Christ’s Resurrection, all the bells inside the church and those in its belfry, large and small, ring out together in rapturous waves of sound. The traditional Easter hymn is sung while the procession moves three times around the church. “Kėlės Kristus, mirtis krito, visi troškom džiaugsmo šito.” — “Christ is risen, death is defeated, long have we thirsted for such joy.”

This ritual three-time procession is left from ancientcustoms, meant to increase energy and strengthen abilities to carry on necessary work. While walking in procession, one should say five prayers, so one will be safe from evil spirits and will not be accosted by ghosts or demons along the road. If one says nine prayers in honor of St. Anthony, and before saying “Amen,” he adds “So that I may not see any wild thing running, nor slithering on the ground,” he will be safe all year from encountering wolves or snakes. Residents of Dusėtos also added: “So that I may not accidentally hurt myself.”

Some people believed that they would be rid of mice, if they sprinkled all corners of the house with holy water on Easter, while others sprinkled their flower and vegetable gardens with the blessed water, to encourage growth.

If a musician could manage to steal just one thread from the priest’s vestments, break it in half and bury the halves separately, his competitors would suffer from broken strings while playing.

While walking around the church in procession, maidens would pray to the Lord for help in making a good marriage, believing that Easter-time prayers would be most effective.

Maidens in Alytus believed they would soon see their future husbands, if they swept all corners of their home on Resurrection morning. But this custom should be recognized as stemming from old witchery — if one would take the sweepings and dump them in a neighbor’s yard, and run home without once looking back, then all mice,roaches and fleas would take up residence at the neighbor’s house. As a matter of fact, the spell would work even better if she could accomplish all this while naked, with no one watching!

A bit more sensible custom, though sometimes leading to accidents, held that those who returned home from Resurrection Mass the earliest, would successfully finish their work faster than others during the coming year, their bees would swarm and make more honey, and all their animals would be healthy. The roads home were full of racing carriages and wagons each trying to pass the other, and many farmers considered it a good chance to display their fine horseflesh.

The Easter table was spread with a fine white linen cloth, and set with a basket of beautifully colored eggs, or with a special “egg-holder” — a “tree” with several “nests” on individual branches to hold and display the eggs. There would be a “pyragas” with raisins, cheese, butter, roast pork, ham, horseradish and colored eggs (at least two for each family member.)

Easter’s meal breaking the Lenten fast was begun ritually: The family stood around the table, and either the father or mother, everyone following, said three prayers for peace in the home, and blessed the table with the Sign of the Cross. One egg was shelled and divided into as many pieces as there were family members. All having had a taste, they would then sit down to the meal, which began with the eggs. One would strike another’s egg with one’s own, in competition to see whose shell was the strongest, whose egg would last the longest. That person would live the longest.

In older times, the Easter celebration lasted several days. On the second day, children would spread out visiting neighbors and godparents, collecting colored eggs everywhere they went. Years ago, children, and grown men, too, played games rolling eggs across the grass or down a special trough, trying to break the others’ eggs. Sometimes a player was caught using a fake egg made of some heavy material, and as penalty for cheating, he would be bombarded with raw eggs. And it is said that even earlier, sometimes the “žandaras” would clap the miscreant in jail for a couple of days.

One of the nicest old customs fell out of use between the 19th and 20th centuries.

It was described in the middle of the 19th century in a treatise called How the Old Lithuanians Lived, and by the early 20th century, it survived only in a small area of Dzūkija. It was known as “lalavimas.” This word is untranslatable, because it merely mimics some nonsense syllables in a song. Well before the approaching Easter holiday, a group of village men would get together, choose a leader and learn and practice some Easter hymns and songs, called “lalinkos.” They would move through the village on Easter Sunday evening, stopping at many homes, especially those that included a likely young maiden. Standing at a window, they would first sing the famous Easter hymn, “Linksma diena mums nušvito” (“A joyous day for us has dawned”), and possibly also the “Aleliūja” chorus.

Their leader then knocked on the window and called to the occupants to “wake up and listen, let us entertain you.” Receiving an invitation, they would sing several “lalinkas” songs, some comic, exhorting the hosts to be generous in offering food and drink, and all of the songs including the indispensable “ie lalo,” “vai lalu lalu.” These songs, the “lalinkos,” spoke of the fine young maidens, the farmer’s fine animal stock, his green fields, and described and celebrated the various chores that must be done at regular times. An example:

The “šeimininkas” would be reminded that his generosity in providing food and drink would be repaid in the coming year, when members of the “lalauninkai” group would join in voluntary help during harvest times, etc. They give him many fine wishes that his flax will grow well, and that his daughters will marry soon. One song, aimed at a maiden, almost a spell, says:

“We wish that you marry this year, That your husband should be handsome! Give us at least a couple of pretty eggs, And you will get a good and handsome husband. But if you fail to give us eggs, You won’t even have children!” (It rhymes very nicely in Lithuanian.)

Topping off their pleasant visit, the “lalauninkai” consult each other, and judging the beauty of the colored eggs presented, choose a lady to be named “Kiaušinių Karalienė” — “Queen of Easter Eggs.” This was a great honor for the lady chosen, whoever she might have been.

It is a great pity that such old, sweet and pleasant Lithuanian customs, as “lalavimas” and the Christmas-time “kalėdojimas,” have vanished, to be remembered with great nostalgia by those who study and try to represent or replicate our ancient culture. But there are those in Lithuania who wonder, why not try, somehow, to recapture them? Lithuanian law says that Easter Sunday and the following day comprise the official Easter holiday. Some ethnographers think of this as an opportunity to revive some of the old traditions, and possibly, chose a “Queen (or King) of Easter Eggs” in schools, businesses, or theaters. If they succeed, Lithuania will have regained part of her ancient heritage.

Previous A Lithuanian Privateer in the American Revolution
Next Sweet Springtime