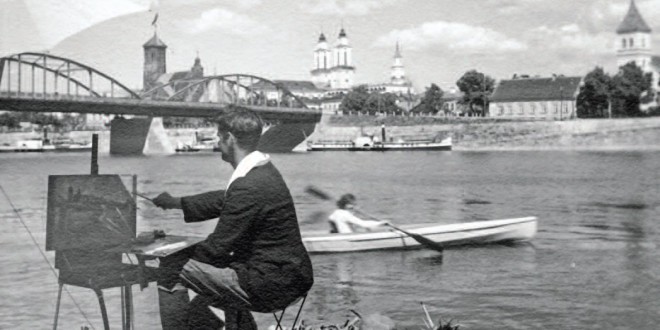 Jonas Buračas was born on August 8, 1898 in the village of Sidariai, Šiauliai county. The Buračas family apparently transmitted a creativity gene to all three brothers: Jonas, Balys, and Bronius. Jonas was the painter, Balys a famous photographer (the history of Lithuanian photography is closely associated with him) and Bronius an ethnographic sculptor and folk artist.

Jonas began his artistic career carving wood. He sought inspiration in Lithuanian folk sculpture. When Bronius sent carvings to the first exhibitions of Lithuanian art in Vilnius (1907, 1910, 1914), he also included pieces made by his younger brothers, Jonas and Balys. Jonas later studiedat the Teachers College in Šiauliai, from which he graduated in 1921. From 1921 to 1923, he took advanced drawing courses offered by the Ministry of Education.

In 1922, Jonas corresponded with Vydūnas and asked him to publish his drawings of Lithuanian folk art, as well as the drawings of his brother Balys, in the journal Darbymetis(Busy Season), which Vydūnas edited. In 1927, Jonas graduated from the Lithuanian School of Art, having majored in advanced graphic design, which he studied with Adomas Galdikas. Jonas broadened his knowledge of painting by traveling and visiting art museums in Riga and Berlin.

From 1929 to 1930, Jonas lived in Paris, where he supported himself through his work as an artist. He immersed himself in the cityʼs artistic life, attending painting classes, visiting ceramics workshops, salons, and galleries, and listening to lectures. On his return to Lithuania, he brought with him about seventy of his paintings in tempera, watercolor, and oil. These were primarily scenes of Paris and its urban landscape. Subjects included the ChampsElysées, the Tuileries Garden, the Arc de Triomphe, and the Bois de Boulogne. This period opened up a new stylistic page in his art. It was as if he suddenly became bolder; he was letting himself go. His palette and color schemes became brighter and his brush strokes freer. He painted as if relishing the scene he was depicting and enjoying the whole process. Jonas Buračas returned from Paris a fully formed painter, having found his language of artistic expression.

From 1919 to 1922, Buračas traveled through Lithuania drawing outdoor crosses and creating decorative folk art. Many works from this period are now in the Čiurlionis National Art Museum in Kaunas. A passion to preserve, collect, and archive folk art connected Jonas with his brother Balys, who also traveled throughout Lithuania, most often on foot, photographing crosses, wayside shrines, folk sculptures, and the artists who created them.

In 1923, Buračas entered a thirteen-stamp series in a competition to design postage stamps to commemorate the liberation of Klaipėda. He also participated in postage stamp competitions in 1924 and 1925, when he won first and second place. He won best design for the first issue of Lithuanian currency the litas and the centas and for bank promissory notes in1929. In addition, he drew designs for the Cross of Gediminas and various flags.

In 1935, Buračas joined the Association of Lithuanian Artists. In 1938, he won a competition for the best painting on the occasion of the opening of the Lithuanian Chamber of Trade and Commerce. Just prior to World War II, when he was forty years old, he married Kotryna Kavaliauskaitė, a history student at Vytautas Magnus University. Soon thereafter, the couple had a son, Antanas; their second son, Marijus, was born after the war. From 1940 on, he taught watercolor painting at the Institute of Applied and Decorative Art in Kaunas. Even though he loved teaching very much (from 1946 to 1951, he was senior instructor and professor), after 1951 he devoted himself exclusively to painting. After the war, he participated in about sixty exhibitions, including at the Tretyakov Gallery, the Pushkin Museum, and many ten-day art festivals in Lithuania and other countries along the Baltic Sea. In 1958, he was named a distinguished artist of the Lithuanian Soviet Socialist Republic. The Kaunas Art Institute moved to Vilnius, but he remained in Kaunas, where he continued to paint. He avoided ideologically themed art and focused on landscape painting. Buračas died in Kaunas in 1977.

In regard to the specifics of his work, early on, Buračas’s favorite techniques were linocut, wood, and copper engravings. Before World War II, he worked primarily in the field of applied graphic design, creating book illustrations, posters, postage stamps, diplomas, promissory notes, emblems, bookplates, and silhouettes. Nevertheless, he is known primarily for his work as a watercolorist and painter. Here he remained faithful to the plein air technique—the direct depiction of outdoor light and atmosphere. As a watercolorist, he is sometimes seen as a follower of Kajetonas Sklėrius, whom he considered his teacher and mentor. While Sklėrius honed his skills with watercolor in Italy, Buračas did the same in Paris. What connects the two is their craftsmanship and controlled technique rather than a common theme or style. Buračas rarely portrayed people; compared to Sklėrius, his palette was suppressed and subtle.

The watercolors of Buračas, especially the early ones, are almost transparent. They pulsate with airand light—bright and buoyant. Although he returned from Paris with a collection of his tempera paintings, once back in Lithuania, painting in oil colors became his primary technique. For his entire life, Buračas remained a true Impressionist. Often, he would paint the same scene at different times of the year under different light conditions. The French Impressionist closest to him in style was Camille Pissarro (1830-1903). While in France, Buračas undoubtedly familiarized himself with Pissarro’s art.

Buračas achieved true virtuosity in his depiction of nature. He was equally successful painting natural and urban scenes, including those with complicated landscape elements, such as water or snow. His pictures display a professional academic drawing technique, and there is a striving for accuracy and precision in his urban landscapes. This was achieved, however, within the context of a light and spontaneous application of watercolors. Natural landscapes, which provide a full spectrum of emotion, dominate the general creative legacy of Buračas.

It has been said that we don’t see Buračas in his landscapes, that there is no emotional treatment of the depicted scenes. But that is not the case. His landscapes are eloquent in every way, including their emotional element: they range from funfilled and optimistic paintings that give off an air of spring romance, such as In a Botanical Garden, 1933, or Freda’s Arbor, 1942 (shown on the inside front cover), to bleak, sad paintings, like Lane in the Pine Forest of Panemunė, 1934 (shown on the front cover), and Sunny Winter in Girstupis, 1943. Although some of his works are painted in a mournful minor key, landscapes painted in a cheerful mood clearly dominate his art.

As the years went by, Buračas’s style changed somewhat. His earliest period was characterized by lefthanded brush strokes, such as in Steeples of Old Town from Aleksotas, 1929, The Dairy Company, 1932, and Klaipėda: Fortress Canal Harbor, 1933, and by a somewhat subdued palette dominated by a spectrum of ochre, earth, and grey colors. Later, his color scheme brightened, and his paintings bristled with shades of light. All his life, Buračas tried to solve the central puzzle addressed by Impressionists—how to depict light artistically. That explains his attempt to portray the same scene under different atmospheric conditions. In this regard, his scenes of Pažaislis and the Sea of Kaunas (Kauno marios) are noteworthy.

Buračas was deeply concerned with the preservation of ethnic Lithuanian culture. When construction workers began to destroy burial mounds near the shores of the Nemunas as they dug out what was to be the man-made Sea of Kaunas, he, along with Antanas Žmuidzinavičius, appealed to the Ministry of Culture on more than one occasion, asking that the mounds be protected and left for archeologists to investigate. Unfortunately, their pleas went unheard—once area residents had been relocated, these irreplaceable troves of history and culture were destroyed. Buračas tried to preserve these magnificent scenes as much as he could, at least in his paintings. Noteworthy sets of paintings are Here will be the Kaunas Sea, Lithuanian Burial Mounds, and Old Architecture of Kaunas and its Surroundings.

The art of Buračas was not limited to Kaunas. It included quite a few coastal landscapes, depictions of urban Vilnius, and several series of paintings of burial mounds and churches at various locations in Lithuania. For Buračas, this retreat exclusively into the genre of landscape painting may have been a form of resistance that allowed him to disengage himself from the official Socialist Realism prevalent at the time. He may have limited himself as an artist by painting landscapes, but in this way he was able to avoid artistic and ethical compromises.

Jonas Buračas was a very consistent and disciplined painter, heading out with his easel almost every day. He did not like to paint natural scenes from memory in his studio. Like his brother Balys, he traveled throughout Lithuania on foot. Painting for him was both an important responsibility and a pleasant way to pass the time. It was a joy and a vacation. He used the money from the sale of his paintings to buy more paint, canvass, and watercolor paper. There are no prominent peaks or valleys in Buračas’s output; his compositions remained at a consistently professional and high artistic level. Even though he remained a conservative and quite prolific landscape artist, he managed to avoid repetition—each patempt to find a new point of view or to uncover a new artistic problem and find a solution for it. His landscapes are peculiarly meditative and introverted. He avoided bold, syrupy colors and never turned towards decorative, kitsch painting. Nor was he an Expressionist. That is why, in the history of painting, Jonas Buračas stands apart from the mainstream; this is what makes him so interesting.

The art of Buračas was somewhat forgotten for a time, and in light of late twentieth-century developments in art, his work was marginalized. It is now being rediscovered, however. A new generation of critics is impressed with his professionalism, the artistic mastery he maintained throughout his creative life, and his loyalty to nature and its lessons—lessons often forgotten in the era of postmodernism. Today, such sincere, professionally rendered landscapes are almost exotic—no one paints that way now. But this classic style can be a lesson, not only to other artists, but also to art critics and art lovers.

Previous Making Koldūnai
Next “She manipulates sounds like a sorcerer”-MIRGA