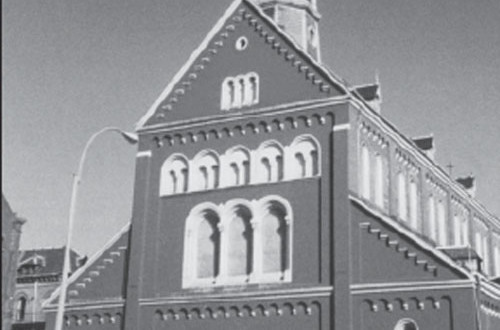 Parish and Church of the Annunciation of the Blessed Virgin Mary in Brooklyn, New York, built by Lithuanian immigrants in 1914.

Kunigas Ateina Kalėdot’: Recollections About an On Old Lithuanian Parish and the Christmas-Time Custom That Lithuanian Immigrants Had Brought With Them From the Old Country

November 15, 2003 History-1900+, Religion Comments Off on Kunigas Ateina Kalėdot’: Recollections About an On Old Lithuanian Parish and the Christmas-Time Custom That Lithuanian Immigrants Had Brought With Them From the Old Country 1,513 Views

Recollections about an on old Lithuanian parish and the Christmas-time custom that Lithuanian immigrants had brought with them from the Old Country.

DURING the 1930s, ’40s and ’50s Brooklyn’s Apreiškimo Parapija (Annunciation Parish) was wellknown as a Lithuanian stronghold. As a “national parish,” without the customary geographical borders, accepting members from far and wide as long as they were of Lithuanian origin, Annunciation’s congregation included families living miles away, as well as within the normal parish precincts. In those days, alongside the predominant Italian population, there was a very strong Lithuanian presence in the Williamsburg section of Brooklyn. Some streets had entire blocks that were occupied by a Lithuanian majority with a sprinkling of Poles, Jews, Italians or Hungarians, as is borne out by a cursory review of the 1930 census.

Our family lived just three blocks away from the church. Mama was a long-time secretary for the Rosary Society, and all three of her children had enjoyed the benefit of the excellent primary education offered in the parish school. Our friends were our classmates and fellow choir-members, and much of our activities centered around the parish. Ours was a close-knit community, with lots of neighborly visiting, and all of our parents’ friends were addressed as “teta” or “dėde.”

The life of the parish followed a cycle of annual events. Masses on January 1st were attended by the usual staid complement of older parishioners, but also by a bleary-eyed contingent of younger folk left over from the New Year’s Eve party in the parish hall. St. Blaise’s feast day, in February, drew all to the church to be blessed by the priest holding two crossed candles at the throat, and on Ash Wednesday we all lined up for ashes. Most of our parish priests placed a little daub on our foreheads, but occasionally a visiting priest would decorate us with a great big smudge. During Lent, a visiting missionary would come to hold “missions”—“rekolekcijas”—and exhort us to cleanse our souls in preparation for Easter. During those times, the church vestibule was filled with tables holding religious items and books for sale. As children, we delighted in looking over these treasures, and almost everybody’s Mama would buy them a little rosary, prayer book or shiny medal.

Passion Sunday brought our choir’s annual church concert. “The Seven Last Words of Christ” in its beautiful Lithuanian translation was usually the main offering, with additional choral works and solo pieces, along with some showy organ works masterfully presented by our talented choir director and organist, Paul Sakas. On Holy Thursday and Good Friday, we made the rounds and visited as many churches as we possibly could.

Easter Sunday meant Sunrise Mass, with all the priests and altar-boys and little girls and boys in their Communion outfits carrying calla lilies in solemn procession. Our pastor, Father Norbert Pakalnis, a man of dignified and serious mien with a deep, booming voice, swathed in gold vestments, carried the monstrance while acolytes held the baldachin over him, and everyone followed, bells chiming, and the organ swelling, as our wonderful choir, in full voice, sang the joyous “Linksma diena mums nušvito.” Unforgettable.

Some time during the school year, the Dominican nuns who served our school as teachers would hold a bazaar in the downstairs hall. The month of May brought well-attended daily evening devotions with Benediction, and the crowning of Mary’s statue as Queen of the Angels, by a young lady chosen from the ranks of the Sodality. Summertime meant a welldeserved hiatus for the choir, and the annual parish picnic. Each evening during the month of October the Rosary was recited, and Forty Hours Devotion brought visiting priests from everywhere to chant the litanies of saints, and in November on the feast of Christ the King to participate in vespers and antiphons sung in Latin with the choir.

As the month of December approached, every parish household received a postcard announcement that would precipitate a whirl of furious activity. “Kunigas ateina Kalėdot!” The parish priests were making their annual Christmas visit. This “kalėdojimas” was an old custom that Lithuanian immigrants had brought with them from the Old Country. Every family considered this pending visit a great honor, and housewives did their utmost in preparation.

Every room was turned inside out. Walls were scrubbed; windows were washed; furniture was cleaned and polished; floors were washed by women on their hands and knees, then waxed to a fare-thee-well; closets were emptied and clothing washed or drycleaned and re-arranged; cabinets were emptied, shelves washed and re-lined with clean paper; dishes were washed and replaced in the cabinets. Ice-boxes were emptied, washed and refreshed. Coal stoves, which for a long while remained the only source of heat in many apartments, received a coat of blacking, and bathrooms were scrubbed with Lysol. Many landlords, themselves parishioners, scrubbed hallways, floors, stairways and landings, as well as their own apartments.

All was in readiness on the appointed evening. Family members were decently dressed, and had already eaten a hurried meal, all evidence of which had long since been put away. There was nothing left to do but wait for the doorbell to ring. Finally came the awaited signal, and we opened our door to one of the vicars, usually accompanied by another man, sometimes the organist, or one of the ushers. Few families could pride themselves on a visit from the pastor; he often delegated this job to the vicars and seldom went himself. Often, it was curly-haired Father Petrauskas who visited us, or Father Kruzas—tall, bespectacled and ascetic-looking. He quickly passed through all of the rooms in our apartment, blessing each with his sprinkler-bottle of holy water. Next, he presented a small black crucifix to each of us for a kiss, wiping it with his spotless folded handkerchief each time. Politely declining to remove their coats, he and his escort agreed to be seated for “just a while, as we have many more stops for tonight.” Sometimes, the other gentleman, whose job was to distribute Christmas wafers (“plotkeles”), would accept a glass of liqueur, wine or coffee, but Father always refused. There followed a series of murmured questions and answers between the priest and our parents, and Mama usually took this opportunity to pay our parish dues, all of which was carefully written down in Father’s notebook. Mama usually had some Lithuanian pressed cheese ready-sliced and offered this to our visitors, and they sometimes took a slice or two. But this Christmas visit by our parish priests was usually short and business-like, though friendly, and over in about fifteen minutes. They had three more families to visit in our building, and many more before the night would be over.

Over the following days, the ladies of the parish compared notes: “Ar girdėjote kad pas Mockeliūnienæ kunigas visà valandà užbuvo?” “Man sakė kad pas Ten Eyck Stryto Kivytienæ kunigas vakarieniavo.” “Mrs. Kivyta from Ten Eyck Street” was wife to my father’s uncle, and a famous “gaspadinė,” so it should have been no surprise that the visitors had dinner at her home, but many ladies envied her that familiarity with the priests. For just that reason, I believe, the vicars did their best to keep to their planned schedule of 15 to 20 minutes for each household, and avoid showing preference. As our parish was so extensive and widespread, these Christmas visits stretched well into January, and, along with Midnight Mass on Christmas Eve, completed the cycle of important annual events.

In the years after World War II, our church’s membership was increased and strengthened by the arrival of the second wave of Lithuanian immigration, the so-called “dypukai,” most of whom became actively engaged in many aspects of parish life. But urban change took over in the late ‘50s when the Brooklyn-Queens Expressway was built, destroying blocks of what had been a stable, well-organized, cohesive neighborhood. People began to move to the suburbs and to New Jersey, and while they occasionally continued to travel to special events at Annunciation Church, regular attendance fell off. Eventually, the school and the convent were closed, and the Dominican nuns left. While there is still an active and loyal Lithuanian congregation, Spanish-language Mass has replaced the Lithuanian Suma at 11:00 a.m. on Sundays. There is no Lithuanian priest in residence, and the stately old rectory has been sold. Christmas visits stopped a long time ago. But that custom, and the entire era of our once-powerful Annunciation Parish remains a strong and pleasant memory among those of my generation who recall it. In retrospect, it seems part of a simpler, happier time. Would that we could all relive it.

Previous Holiday Goodies
Next Hot drinks for those cold days