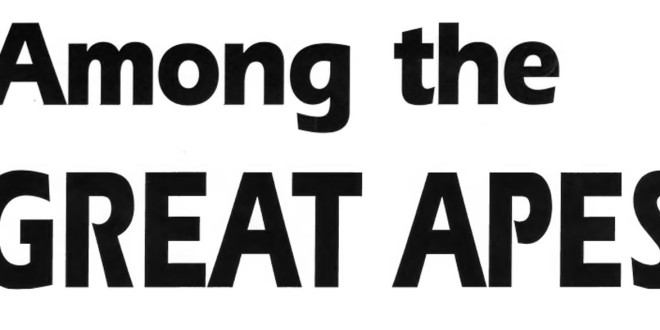 AMONG THE GREAT APES

What’s My Line?” was early television’s most popular game show. They awarded no vacation cruises or luxury cars, but the game itself was stimulating. It required a celebrity panel to guess through yes/no questioning at the occupations of various guests. And the panel got some unusual ones — lighthouse keeper, skyscraper window washer, United Nations translator.

Birute Galdikas could have presented the panel with a totally unique position if she’d been a few years ahead with her life’s work. Galdikas, considered the world’s foremost expert on orangutans, has spent all or part of twenty-seven years on a pioneer study of the animals. Aided more recently by the Orangutan Foundation and a 1995 autobiography, the job has brought her notoriety among scientists and ecologists.*

Among the general public, however, even awareness of Birute’s work description leaves a potential for confusion. After all, orangutans tend to be lumped with gorillas and chimpanzees. The distinctions aren’t trivial, Galdikas notes in her book Reflections o f Eden. True, she writes, all three groups interest researchers with their genetic similarities to man. And the three comprise the so-called great apes class because of their adult size, ranging from a female chimpanzee’s fifty pounds to a male gorilla’s four hundred. But the groups branched off from the primate biological tree millions of years apart, display different personalities, and exist today in different parts of the world.

The orangutans have been hardest to study, owing to their relatively shy nature and a geographic distribution confined now in dwindling numbers to the Borneo and Sumatra rain forests of Indonesia. Like many of earth’s species in modern times, the orangs have found themselves threatened by both land development and illegal hunting. Galdikas quickly — and courageously — concluded she needed to challenge these concerns as well as research when she arrived in Borneo in late 1971.

Backed by three private foundation grants, she and Canadian husband Rod Brinclamour pitched camp in the Tanjung Puting game reserve. The Indonesian government supplied several assistants with minimal English. The nearest town at the time was thirty miles away, and the only route in and out was by canoe. Roads, had there been any, would have been turned to mush anyhow by the daily rains; it was the height of the wet season. Leeches, stinging fire ants, and mosquitoes abounded in the humid equatorial heat. The team had no electricity or refrigeration. Diet consisted of a monotonous repetition of rice and sardines, the initial work of clawnto-clusk hikes in the nearby swamps to locate the elusive apes.

Motivation and a sturdy constitution mean everything under such conditions. Galdikas is unclear herself why animals would motivate her so strongly, but she readily credits the constitution to her ancestors. They might have been bewildered by the jungle fevers and rashes she battled constantly, but certainly could have admired her characteristic Lithuanian tenacity. They likewise would have appreciated her love of the outdoors; Lithuanians also tend to be naturelovers. Another useful trait given a jungle existence.

Her willingness to move far from her Canadian childhood roots may be partly explained by a look at the family history. Her mother’s parents migrated to the U.S. in the late 1800s, produced Birute’s aunt Bronice, and returned to an independent Lithuania after World War I. Birute’s mother was born in Lithuania in 1925. Birute was born in a German refugee camp just after World War II; Antanas and Filomena, her newlywed parents, were fleeing the Soviet Army. The family chose to migrate to Canada, U.S. immigration at the time being hindered by a very restrictive quota. Bronice, as a U.S. native, headed freely for the States. Another refugee aunt chose Australia. Paternal relations, hopeful for a Soviet evacuation, remained in Lithuania. Antanas and Filomena, with two sons and daughters in tow, would eventually move from Canada to California in the mid 1960s.

In a family tree with branches spread so wide so fast, geographic distance loses its daunting quality. Still, her attitude and aptitude aside, there’s something wrong with this picture of a young field scientist. Equal women’s rights is a noble aim, but aren’t there limits here? Not in Galdikas’ view, or in her late mentor Dr. Louis Leakey’s. One of the most famous scientists ever, anthropologist Leakey enlisted women for all three groundbreaking great ape studies: Dian Fossey, Jane Goodall, and Galdikas. Fossey, murdered by poachers and featured in the 1988 Hollywood film Gorillas In The Mist, is probably best known to the public. Goodall, first to enter the field, is most highly regarded among scientists for her chimpanzee research.

One of Leakey’s lesser, yet interesting theories was that females are in fact better suited for field work. He cited two reasons: they tend to be more observant, and the study animals feel less threatened by them. In any case, the three determined women enjoyed spectacular successes in physically demanding environments.

Operating from the camp named for her mentor, Birute had little idea what to expect at first from a research standpoint. The UCLA master’s degree coursework in Anthropology was superficially helpful, but specific Western knowledge on orangutans did not exist. Natives maintained that the apes could be dangerous. Stories circulated about them employing their great strength (maybe eight times that of man, with jaws that can crack coconuts) in a rare attack on humans. Mostly, she would find, the orangutans dwell in the treetops a hundred feet above the forest floor and forage for fruit. Galdikas, with infinite patience over the years, would discover many orang particulars.

Although the furry orange beasts once numbered in the hundreds of thousands, there are less than 30,000 left in the wild due to human encroachment and recent fires. Thus, Birute’s environmental work may ultimately prove to be of greater service than the scientific. In 1971 Indonesian game reserves like Tanjung Puting offered wildlife little true protection. Laws against hunting were not enforced, and it was perfectly legal to cut down the trees that served as the orangutans’ habitat. Through a letter writing campaign, Galdikas persuaded public officials to prohibit logging in Tanjung Puting.

Simultaneously, she strove to increase public awareness of the hunting laws. As the 1970s dawned, orangutans were being illegally captured and sold as pets worldwide. Transportation conditions were poor and the mortality rate high. Local people were largely ignorant of these facts. One of the Galdikas book’s most dramatic moments depicts her alone in a tenement amidst a hundred hostile Indonesians who’d gathered to watch her confiscate a pet orangutan from its incredulous and irate owner.

With heightened public awareness, the business of gathering and rehabilitating ex-captive orangutans would go smoother. She has returned over a hundred to the wild to date, with Camp Leakey serving as a halfway house. The camp has become something of a tourist attraction in that respect, showcasing the orangs and underscoring their plight. Her crowning achievement with the excaptives was being allowed to touch one female’s newborn infant. Try this as an experiment with any wild animal species if you question its significance.

Born on one continent, raised on a second, and dedicated to a mission on an island off a third, Galdikas today pursues an equally mobile lifestyle. She teaches at Canada’s British Columbia University January to May. Summers she convenes in Los Angeles with family and associates at the L.A.-based Orangutan Foundation, the environmentalist group she co-founded ten years ago. Autumns she spends at Camp Leakey. As an academician, she also attends numerous conferences, such as the one in Vilnius this past July. In her first visit to her ancestral homeland, she met with President Adamkus and struck a common chord immediately: as a former U.S. citizen and Environmental Protection Agency official, Adamkus remains keenly interested in the future of wild animals worldwide.

She had a rude jolt when she found how badly her command of the Lithuanian tongue had slipped. A Lithuanian-Canadian Saturday schools product, Birute’s ethnic consciousness had languished in the Far East. But this is only a small part of the price she’s paid for her total commitment to her work. In a tragic marital evolution, her marriage to Brindamour ended in divorce in 1978, shortly after she took her Doctorate at UCLA. Nearing thirty at the time and feeling the lack of his own career, Rod returned to the West with Binti, the couple’s only child. Binti is now twenty one and a confirmed Westerner with a taste for rock music. Birute after the change would wed a native, a union that has produced a girl and a second boy.

Jane and Fred are currently in their early teens. Schooled mainly in the West and living with their grandparents in L. A., their perspective has come around to the Western.

Many of those personally concerned no doubt have wondered, “What if’? What if Galdikas had opted for the more comfortable Western lifestyle with Brindamour? What if she had bowed to convention, and age? But then that would have been out of character; if she had, she wouldn’t be where and what she is today.