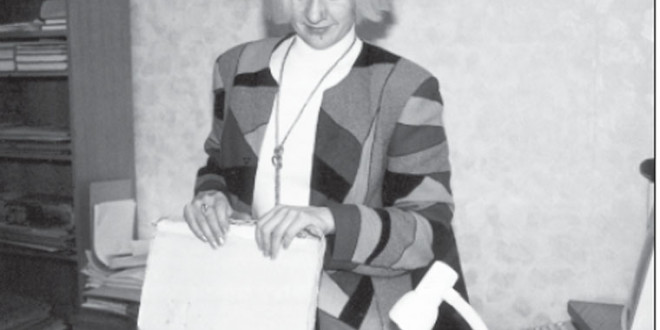 I BELIEVE MANY AMERICANS OF LITHUANIAN descent may be wondering how they can learn more about their ancestors and roots. The wonderful adventure of searching for the past may not be as difficult as one may think, but it does require patience.

The place to start is the Lithuanian State Historical Archives (Lietuvos Valstybės Istorijos Archyvas), located on a street named Gerosios Vilties, number 10, in Vilnius. This building is the biggest depository of all Lithuanian historical documents from the 15th century and on. But the most asked for requests are for records of parents, grandparents, or, a genealogical search for their family roots.

Now a resident of Vilnius, I have had several opportunities to meet and talk with the head of the Genealogical Department, Neringa Češkevičiūtė. She graduated from the History Faculty of Vilnius University, and works in the field of genealogical research. Anything you want to know about your roots starts in her office.

The years of Soviet occupation, from 1940 to 1991, made it difficult for foreigners to obtain any information about their ancestors. That was then, but now times have changed for the better.

Since Lithuania regained her independence, people living in Lithuania are also requesting information about their family members. In addition, Neringa receives letters mostly from the USA, Canada, Latin America and Australia. It seems Lithuanians are scattered all over the world, eager to discover their origin, for requests now come in from New Zealand, Singapore, South Africa, Saudi Arabia, Egypt, the Philippines, and recently China. Letters from outside of Lithuania are usually written in English, Polish, and sometimes Lithuanian. Each letter usually has a few phrases in Lithuanian.

As a result of the amount of mail the Genealogical Department receives, Neringa and her staff of five assistants are swamped with work. Every letter is entered on a page in a ledger in the order it was received, with the date and the information requested, and directly across it, is a page which notes the date it was answered. I was there one morning, and Neringa showed me a pile of letters at least six inches, or more, in height, each one waiting to be answered. In addition to her regular duties, from all appearances, it seems she has assumed the job of a bookkeeper, too.

When writing for information, patience is required. If a person asks a single question, the answer may be given anywhere between one week to a month. If the letter asks for an extensive genealogical research, bearing in mind the workload facing the staff and the painstaking research required, a wait of perhaps as much as two years may be necessary. At the moment, letters written in 2000 are being answered. Remember, patience is a virtue.

Neringa advises those who write, or come to her office in Vilnius, to give her as much exact data as best they can, and not just guesses of the names of places, villages, or towns, including family and first names. Also, variations in the spelling of names. This is extremely important as it would save the research staff a considerable amount of time. One illustration of this point were records of three gentlemen having the same first and last names, different dates of birth, and all from different villages and counties. How do you answer that letter?

I am grateful to Neringa for taking the time in showing me a few of the many books she uses in her searches. And two of them were thick volumes that held the marriage records in Lithuania from 1795 to 1801. After all these years, I noticed that they were in a readable condition. According to Neringa, the oldest church books go as far back as 1604, and they, too, are in remarkable condition. Most church records in possession of the Archives, however, go to the end of the 18th century. She also has available two thick volumes of the Lietuvių pavardžių žodynas (Dictionary of Lithuanian Surnames) that show in which part of Lithuania they lived. These books were printed during Soviet times with only 5,000 copies, and they were given to archives, libraries, and universities. Some were also sold in bookstores, and when these were sold out, that was it. Now, they are no longer in print.

Lithuania was a part of Czarist Russia for over a century prior to the outbreak of the First World War in 1914. The occupying power divided Lithuania into three provinces (called gubernijas in Russian), Suvalki (Suvalkai), Kovno (Kaunas), and Vilno (Vilnius). All church records were written in either Russian, Polish, and in some cases, Latin. As a result, first names and family names were sometimes written differently, and to make matters more confusing, were either Russianized or Polonized. Errors in ages were occasionally found, which could have been made by the priest or his secretary. Many immigrants leaving for America were issued passports by the authorities with non-Lithuanian sounding names. The name Laskauskas, as just one example, was Laskowski in Polish, and Laskovsky in Russian. One of my relatives’ family name was Švegžda, but he was listed on the passenger manifest of the ship when he arrived at Ellis Island as “Schwegsda”.

The majority of Lithuanians are Roman Catholic, and as a result, births, christenings, marriages, and deaths are registered in church documents, which contain a wealth of information. Birth records give the date of baptism, place of birth, the names of the parents, including the mother’s maiden name, and the priest involved. Some parish records even give the names of the godparents. A marriage record gives the names of the witnesses, maiden names, parents’ names, living places (towns, villages, etc.) Death records give the date and its cause, including the cemetery location. However, the exact location of a grave is not listed in any parish cemetery record, and anyone who comes to the Archives bureau asking for such information, will be disappointed. In my own case, my grandmother passed away in 1918, and my relatives were able to show me where she was buried. My grandfather, on the other hand, died over a hundred years ago, in 1893, and even though he was buried in the parish cemetery, none of my relatives could find his final resting place.

The amount of people asking for their family history has increased dramatically over the years. My request in 1994 was fulfilled in about four months. When I applied for another search in 1999, I received the answer two years later. What was a trickle a few years ago in genealogical searches, has become a flood today.

The cost of a search will probably vary from year to year, considering the increase in costs and postage rates. Before a search can begin, a prepayment will be required, and additional charges will be necessary for any documents requested.

Before January 1, 2002, all historical archives, up until 1915, were at the Gerosios Vilties office. From 1916 until 1939, they were at the Metrikų Archyvas in the Wedding Palace, or Santuokų Rūmai, as it is called in Vilnius.

This arrangement has been changed. Church records are no longer kept in the Wedding Palace; they are now at the Gerosios Vilties main archives building. Today, only civil records starting in 1940 and continuing from then on, are located in the Wedding Palace. There were no church records kept after the Soviets took over, for obvious reasons. Only marriages that took place at the Wedding Palace were legal as far as Soviet laws were concerned. However, a couple could get married in a church ceremony, if they so desired, but only after the civil ceremony. This was a risk, too, for the newlyweds, as it would show to the Soviets who the “believers” were, and this again, would involve job problems.

For a child to be baptized in a church during Soviet times, was a risk for the people involved, such as losing their good jobs, or getting demoted from their present job. Parents and godparents would do this in secret, and no record was kept, except in their hearts.

Some church documents may have been destroyed during the war, but most of them are now in the archives in Vilnius. A search for one’s ancestors is a good investment, in my opinion. My advice is to be patient, and stay the course, for the rewards would be gratifying.