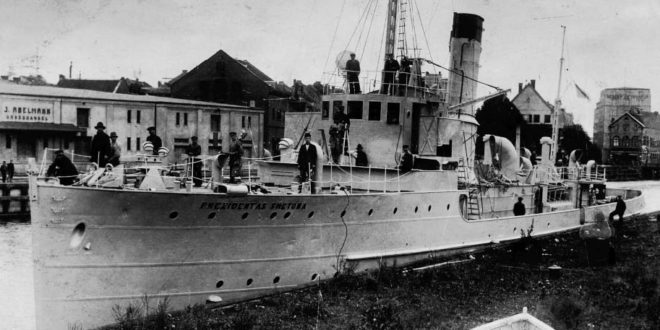 By Romualdas Adomavičius of the Lithuanian Sea Museum.

As early as 1923, the problem of protecting Lithuania’s Baltic Sea coastline from illegal activity had become acute. Huge amounts of alcohol and other contraband were entering Lithuania by sea, most often coming from Danzig (present day Gdansk). The old, slow motorboats used by the Coast Guard police were unable to stop the smugglers, who operated with the willing help of fishermen with whom they shared some of the profits.

Soon after Lithuania regained the region and the port of Klaipėda in 1923, members of the Sailors’ Union proposed the idea of creating a Lithuanian Navy. They insisted that this was a matter of national pride, prestige and practical necessity. Ignas Musteikis, the head of the Coast Guard police for the region of Klaipėda, tried to secure funds in the national budget for the purchase of a large sea vessel which could be used to protect the seacoast. Unfortunately, the government at that time did not have sufficient funds for either navy or ships. However, action on these proposals did begin after the presidential coup of December, 1926.

A ship for seacoast patrol

In the spring of 1927, the Lithuanian government purchased a mine-sweeping vessel, M-59, from Germany for 289,000 litai. It had been built in Geestemünde in 1917 and decommissioned after World War I. This steamship was 59 meters long, had a water capacity of 525 tons and a sailing speed of 16 knots. After long discussions about which government jurisdiction to place it under, the decision was made to assign the ship to the Ministry of the Interior and use it for protection of the seacoast. Teodoras Daukantas, one of the leaders of the Sailors’ Union, who was then the Minister of Defense, suggested that the ship be named after the President of the Republic of Lithuania. Adomas Daugirdas, a former officer in the Russian Navy, was appointed the first captain of the ship. Members of the ship’s crew carried the rank of police officers.

The “Prezidentas Smetona” steamed into Klaipėda harbor on June 17, 1927. The ship was repaired, repainted, armed with 37mm guns and a machine gun, and began service as a “sea protection vessel.” By November it had already detained the “Hassan Bier,” a ship used by smugglers to transport alcohol near Palanga. In December 1927 Major Antanas Kaškelis took over the duties of captain with Adolfas Darginavičius as the ship’s engineer. On August 8, 1928, President Antanas Smetona and his wife, along with high government officials, boarded the ship which carried his name. The guests spent an hour and a half at sea and were treated to coffee. In February of 1930, the ship “Westa,” was detained and 1,810 liters of contraband alcohol confiscated.

Despite the ship’s initial successes, it became clear that this type of ship was not very effective in the struggle against smugglers on the Lithuanian seacoast. The ship’s stokers needed an hour to get its boilers up to the required steam pressure in order for the “Prezidentas Smetona” to sail out of harbor. In addition, once it sailed, the black smoke pouring out of its chimney easily gave away its position. As a result, the swift motorboats used by smugglers usually succeeded in slipping out of the coastal zone. Maintenance of the ship was expensive and the coal used to stoke the boilers was especially costly.

New motorboats designed for sea border patrol were ordered from the Lindenau & Cie shipyard in Klaipėda. In January of 1933, the “Prezidentas Smetona” was decommissioned. It was taken over by the Ministry of the Defense and moored in the canal of the Klaipėda fortress under the care of Major A. Kaškelis and three members of the crew. During the months of August and September it was taken to the dock in Liepāja, Latvia for hull repairs and underwent further major repairs and installation of equipment and munitions in 1935.

The Lithuanian Navy is established

The decision to establish a Lithuanian Navy was finally made in 1934. Sailor uniforms were designed and a flag adopted, which showed a golden Vytis cross on a red shield in the center of the national flag. The flag had actually been designed earlier – in June of 1927, when the Ministry of Defense was vying with the Ministry of Interior for acquisition of the newly-purchased ship.

On September 1, 1935, the Lithuanian Navy was officially established by order of Gen. Stasys Raštikis, head of the Lithuanian Armed Forces. The “Prezidentas Smetona” became the first ship of the Lithuanian Navy. Major Antanas Kaškelis was its captain, serving along with a crew of 43 persons, including mechanical engineer Adolfas Darginavičius, artillery officer Lieut. Povilas Labanauskas, navigation officer Lieut. Vytautas Kuizinas, 6 noncommissioned officers, 21 sailors and one civilian employee.

Officers had to serve for 20 years, non-commissioned officers for 4 years, sailors (stokers, gunners, machine-gun operators, steersmen, machinists, radio telegraph operators, signalmen) for 1.5 years. The “Prezidentas Smetona” was given the status of a training ship with the assignment of preparing naval reservists in various areas of specialization. About 200 specialists were trained from 1935 to 1940. The ship was moored along the southern promontory of the Akmena-Danė River estuary because plans to build a separate port for naval vessels did not materialize.

Previously, young Lithuanian men had received government scholarships to train in the naval academies of Latvia, Italy, France and elsewhere. Now they were able to fulfill their military service requirements on the “Prezidentas Smetona.” After the sailors had completed their first sea voyage, the captain of the ship would certify in writing the suitability of candidates to serve on the ship. Not everyone could withstand the rough seas and some returned to their on-shore units.

In addition to its training role, the “Prezidentas Smetona” also had an important public relations role. It would greet ships from other countries such as Latvia, Sweden and the USSR when they sailed into Klaipėda on friendly or commercial visits. And it generated good will and public support by allowing excursion groups from Lithuania, such as scouts, soldiers, teachers, riflemen, students and others, to visit and sail on the ship.

Under German and Russian masters

The district and port of Klaipėda came under German control on March 23, 1939 after the German ultimatum. Acting quickly, “Prezidentas Smetona”, 6 Coast Guard police motorboats and a number of cargo ships departed Klaipėda the following day and sailed into the relative safety of the River Šventoji. Unfortunately sedimentary deposits made the harbor too shallow for the large ship to enter. On instructions from the government, the ship diverted to Liepāja. There it underwent repairs while the dredging of Šventoji was underway. Subsequently, the port of Šventoji became its home base. Because of its restricted circumstances, the ship was unable to fulfill its function of protecting the sea border and the training and discipline of its crew declined.

On November 18, 1939, Lieut. Capt. Povilas Labanauskas was appointed captain of the ship. Young naval lieutenants R. Nakas, J. Teleiša and V. Nakas began their service on the ship in the spring of 1940. In 1940 the army of the USSR occupied Lithuania. On June 23rd, Gen. Vladas Vitkauskas, the new Minister of Defense, gave orders to change the name of the ship to “Pirmūnas” (“Achiever”) and hoist the red flag. On July 21st Soviet commissar L. Trainin was assigned acting captain of the ship. That night, in an act of opposition, naval officers P. Labanauskas, V. Kuizinas and R. Nakas escaped the ship, sailing out to sea on the yacht ‘Nijolė.’ A week later, the entire crew of the vessel was expelled.

The Soviet occupants took over the vessel and made it a part of the Border Naval Brigade in Liepāja. The name of the ship was changed to “Otlichnik”. During the war it was renamed “Korall” and served as a mine sweeper and a guard ship in the Soviet Balticfleet.

The sea protection and naval training vessel “Prezidentas Smetona”, which had served the navies of three countries ‒ Germany, Lithuania and the USSR, ended its service tragically. Renamed again, this time with the almost anonymous name of “T-33”, the ship hit a mine and sank at 11:25 am on January 11, 1945, as it was sailing from Helsinki to Tallinn. This happened about 10–15 sea miles from the island of Aegna in the Bay of Tallinn. A few years ago, underwater archeological experts from the Tallinn Sea Museum discovered remnants of the ship on the bottom of the sea.