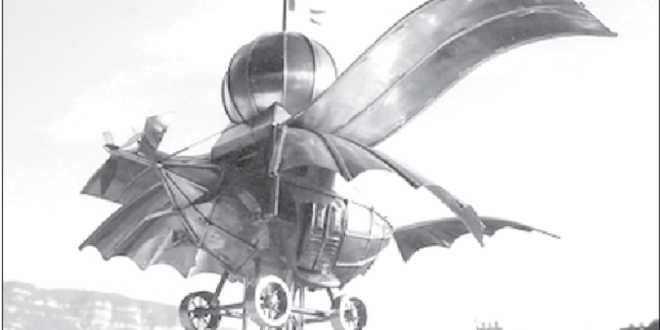 Before the advent of modern aeronautics, men first attempted flight by wearing wings and jumping off towers, then tried hang-gliders, ornithopters, hot-air balloons, and steam-powered, heavier-than-air flying machines—aerodynes. Aleksandras Griškevičius (1809- 1863), a Lithuanian philosopher and inventor, experimented with such early modes of flying and combined their most promising features in his Samogitian Steam- flyer. Eyewitnesses reported that the odd, makeshift contraption did indeed become airborne.

Born into the Samogitian gentry, bajoras Griškevičius excelled at the Calvinist secondary school in Kėdainiai, but it is unclear where he continued further studies. Conversant in Lithuanian, Polish, Russian, German, and French, during the mid-1840s he worked as a translator at the Kaunas Civil Court. He raised two sons and seven daughters, two of whom accused him of being immoral and irreligious. Jailed for several months, the case was dropped when twenty-eight witnesses testified in his favor. It turned out one of his daughters was trying to justify her elopement. Even so, these and other proceedings cost him his job. He left Kaunas and moved to his brother’s small estate near Žiauliai then to his wife’s hometown, Viekšniai, to spend his last years in the dwelling that now houses the Museum of Aviation Pioneer Aleksandras Griškevičius.

Griškevičius also got into trouble for a manuscript in which he proposed a dualistic explanation of divinity and the soul. Written for the general reader, the philosophical tract was sent off to a German press. Unfortunately, the publisher had gone bankrupt, and the manuscript was returned, only to be confiscated by a suspicious local postmaster. It was passed to the censor and then to the governor general of Vilnius, who thought Griškevičius was not of sound mind and should be put away in a monastery. The allegedly heretical work soon came to the attention of the diocesan curia. They decreed that Griškevičius’s musings contradicted both Roman Catholic and Eastern Orthodox teachings, but he countered he had been raised a Calvinist and was of the Evangelical and Reformed persuasion. An independent and impartial medical team was called in and determined he was mentally sound. The case was dropped. Nonetheless, after Griškevičius’s death, the pastor and the marshal of Viekšniai Parish entered his quarters and gathered and burned all the papers and notes they found. The courts, however, kept the manuscript that is now in the Academy of Sciences Library in Vilnius.

Along with his philosophical pursuits, Griškevičius tried flying in balloons, gliders, and large kites steered by airscrews. The roof of his house became a launch site. He studied and tested the lift characteristics of different wing profiles and forms, sometimes with unhappy results—a flight from a nearby church steeple ended in a crash landing and a severe concussion. Reports in Vilnius newspapers early in 1843 about William Henson’s Aerial Steam Carriage, also called Ariel , focused Griškevičius’s energies. In no time at all, he had devised an improved version and penned Umenie letat (The Art of Flying). First presented to the city of Žiauliai’s magistrate, the study was sent to the Academy of Sciences in St. Petersburg and discussed in the Russian press, but did not attract any financial backers.

The booklet Parolot zmudzina: Zswobodnej mysli Aleksandra Hryszkiewicza (The Samogitian Steam-flyer: By the Free Thought of Aleksandras Griškevičius), written in Polish and published in Kaunas in 1851, is his major publication. It summarized aeronautical theory, discussed some earlier aeronautical pioneers, and presented his own steerable aerodyne with illustrations. He predicted international air travel, airmail, and military air forces. Distributed to local government officials, landholders, businessmen, and clergy, the Samogitian Steam-flyer also failed to interest investors.

The proposed flying machine had two pairs of wings, the upper pair for horizontal balance and the flapping lower wings to create an air cushion. Vellum enclosed its bamboo framework. Takeoffs were made by rolling the craft rapidly down a steep incline or lifting it upwards with an attached balloon, deflated once aloft. A steam engine and a spring-driven Archimedean airscrew provided the mechanical power to flap the wings and turn the wheels. Once aloft, the front propeller and rear tail assembly would steer the steam airship.

The Samogitian Steam-flyer did not remain a project on paper. Over the next few years, Griškevičius rethought and improved various technical and aerodynamic features, transforming the paper project into a flying vehicle. The Samogitian Steam-flyer made its last flight in 1855, described many years later by Professor Julian Talko-Hryncewicz (1850-1936), an anthropologist and member of the Polish Academy of Sciences, who had grown up in Kaunas and attended school with the inventor’s sons.

Talko-Hryncewicz relates that one fateful summer day Griškevičius decided to demonstrate the airship to the public and to the governor visiting the open-air market. Suddenly off and running, the Samogitian Steam-flyer took to the air, flying above ground and over the heads of the astonished onlookers. Then all hell broke loose. The unusual flying object panicked the horses, taking the surprised governor along with them. During the helter-skelter stampede, several bystanders were injured. Griškevičius lost control of the airship, the hot-air balloon did not work, the machine crashed, and he broke a leg. The governor wanted the troublemaker arrested and tried for disturbing the peace, but Griškevičius’s wife saved the day. To forestall her husband’s possible deportation to Siberia, she destroyed all incriminating evidence, chopping up and burning what remained of the steam-flyer’s wreckage.

The loss of notes, drawings, and models makes it difficult to place Griškevičius in the storied ranks of aeronautical pioneers. However, there is the Parolot zmuizdina booklet, which provides valuable information about his debts to earlier inventors, whose ideas were applied to the Samogitian Steam-flyer. He mentions Jacob Degen, a Swiss clockmaker in Vienna, who was as ingenious in flying experiments as in self-promotion and publicity stunts. Between 1807 and 1817, Degen tested ornithopters with wings devised on the flapvalve principle: opening on the upstroke, closing on the downstroke. Unlike the Griškevičius airship, Degen’s ornithopters landed like gliders. He even made a clockwork-driven model of a mechanism lifted aloft by contrarotating motors—in other words, a true helicopter. In a well-publicized 1809 feat, he attached a hydrogen balloon to an ornithopter raising him and the entire apparatus aloft. The indispensable hydrogen balloon was seldom illustrated, usually downplayed, and Degen was mistakenly applauded for flying unaided.

Griškevičius paid close attention to the Ariel , a steam carriage designed by William Henson in the early 1840s. Launched from a ramp to save power, it was meant to have a sturdy 25 to 30 horsepower steam engine. Never built, a later model based on Henson’s patent drawings could not fly. Nonetheless, the Ariel gained international currency and plausibility when its attractive illustrations appeared in London and Paris newspapers and were reproduced in presses worldwide. In 1847-1848, Henson’s friend John Stringfellow made an improved steam boiler and engine for a modified version of the Ariel steam carriage. There is no contemporary evidence, however, that this later model maintained either a horizontal or a rising flight path. As we have seen, the same problem bedeviled Griškevičius’s contraption.

Vytautas Merkys (1929-2012), a professor and member of the Lithuanian Academy of Sciences, suspected that Talko-Hryncewicz’s account, which was based on anecdotal hearsay, might need revision. Merkys did not doubt the testimony of the old-timers who witnessed the Samogitian Steam-flyer’s unusual performance, but knew full well that, with the passage of years, memories can cloud and become prone to flaws, misleading embellishments, and outright mistakes. To get to the bottom of things, he checked out and correlated old court records and newspapers with other documentary material. Merkys concluded in a 1971 biographical sketch of Griškevičius that the Samogitian Steam-flyer did not fly in Kaunas, but in Žiauliai.

Griškevičius would be pleased to know that by twists of fate, the town’s airspace has gained military and commercial significance. The Soviets constructed one of their largest military airports at Žiauliai, featuring a 3,500 meter runway (2.17 miles), custom-built for MiG fighters, Tupolev bombers, and Bison long-range strategic bombers. In an emergency, it could also serve as an alternate landing site for the Soviet space shuttle Buran. This runway, by far the longest in Lithuania, now serves the Žiauliai International Airport, an important air cargo hub and home base of NATO’s Baltic Air Policing mission. As we see, Griškevičius’s predictions, fantastic and unbelievable in his day, have all come to pass—and then some.