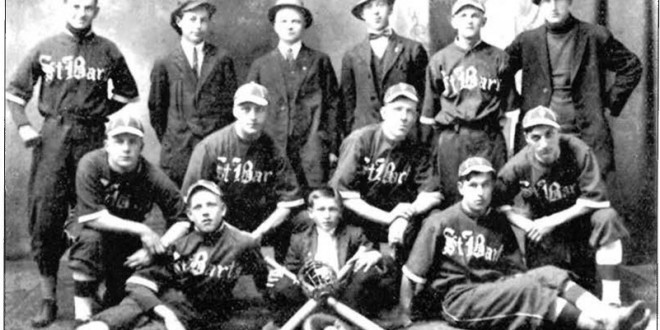 Baseball team of St. Bartholomew Lithuanian Parish in Waukegan, Illinois at the beginning of this century (Photograph from the 1916 Lithuanian American Catholic Yearbook).

The Sporting Life: and We Play Baseball Too!

YOU MAY BE SURPRISED TO know that basketball is very popular here,” a Lithuanian schoolteacher wrote her longtime American pen pal in the early 1970s. “Some of our players are very good.” I know when my mother read this I was surprised. And skeptical. The first generation European boys at my high school embraced soccer, not basketball. I remained skeptical until 1992, when the Lithuanian national squad beat the United Team in a dramatic and emotional Olympic bronze medal game. After a second consecutive bronze in 1996, the whole world knows: basketball players are very good indeed. 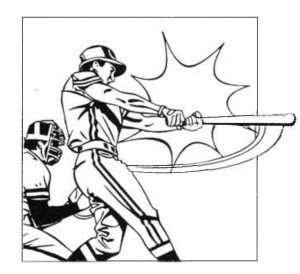 Many younger readers will be surprised, if not skeptical, to hear of equally talented Lithuanian American athletes in U.S. professional baseball. As you are probably aware, Lithuanians rJ emigrated to America in droves between 1865 and 1914. Their off some of our spring started to appear in the major leagues in the years preceding World War II. Professional basketball, football, and hockey wouldn’t have a significant impact until the early 1960s. Consequently, the Sons of St. Casimir were joining the cream of the athletic crop flowing into American baseball in the days before the Kennedy administration. Fourteen of the players named in this article performed in the pre-JFK era.

Indirectly, the little Baltic country of less than four million has contributed much to major league baseball. Lithuanian Americans have combined for over 500 home runs, 300 plus pitching victories, and nine All Star team appointments. They have represented all sixteen original teams and participated in nine World Series. Three of the players, in fact, seem destined to be remembered in baseball folklore.

One of the three, lefthanded pitcher Johnny Podres (Poderis), is probably the best ballplayer of the entire group. He was voted Most Valuable Player of the 1955 World Championship Series after beating the New York Yankees twice, once in the deciding seventh game. “I’ll never forget this all my life,” he said during the postgame celebration, four days past his twenty-third birthday. Nor would any fan of his Brooklyn Dodgers team. 1955 would prove to be Brooklyn’s only world championship year; three seasons later the team moved to Los Angeles.

Podres led the National League with 6 shutouts and a 2.66 Earned Run Average in 1957, Brooklyn’s last year of operation. He made the 1958, 1960, and 1962 N.L. All Star teams, led the league in won lost percentage with an 18-5 .783 mark in 1961. But chronic back problems prevented him from realizing his full potential. Nonetheless, John closed out an extraordinary sixteen year career in 1969 with 148 wins and twenty four shutouts. Veteran players class his changeof-pace pitch as perhaps the best of his era, his one-time 93 mile per hour fastball well above average. He’s gone on to become a pitching coach for a number of major league teams.

No World War II baseball book author would think of omitting the story of Pete Gray, a second notable Lithuanian American player. The St. Louis Browns (now Baltimore Orioles) outfielder played only one year in the major leagues, 1945. The skill level then was at an all time low: most able-bodied players were serving in the armed forces. Despite that seeming advantage, Gray hit only .218. What made him very special, though, is he did it—let’s capitalize this WITHOUT A RIGHT ARM!

The victim of a boyhood trucking accident, Pete developed a fluid fielding technique of catching the ball in his glove, tucking glove and ball under the stump of his right arm, and picking the ball out with his left hand to throw. How he managed to hit is harder to visualize. But he actually was quite successful in the minor leagues, leading a circuit two levels removed from the majors in batting average in 1944. He retired after a seven year professional career and was reportedly golfing into his sixties.

A step behind Gray in the inspirational class is Eddie Waitkus, a smooth fielding first baseman primarily for the Chicago Cubs and Philadelphia Phillies 1946-55. Too often he seems to have been in the wrong place at the wrong time. His playing days preceded the Gold Glove fielding award, for which he could have contended annually. Far worse luck, he lost four potentially productive seasons to military service during the war. And then later he missed the latter half of 1949 recuperating from a serious gunshot wound inflicted by a deranged female fan in a fashionable Chicago hotel.

About the only lucky break Waitkus ever caught was returning from the shooting to bat leadoff position for the legendary 1950 league champion “Whiz Kids” Phillies. This was a collection of young unknowns that the experts had been picking to finish third or fourth. Waitkus for his part finished with a career .285 batting average, striking out seldom. But he displayed none of the home run power expected from his position. He retired to a department store manager’s position in his native Massachusetts and died in 1972.

Three other Lithuanian Americans will be forgotten in twenty years: Frank J. Thomas (1951-66), outfielder Barney McCoskey (1939-53), and catcher Rich Gedman (1980-92). At their peaks, however, they were equal to Podres and better than Waitkus. Thomas totaled an impressive 286 home runs and made the N.L. All Star team three times in his first eight seasons. 1958 was the standout, 35 HRs and 109 runs batted in for his hometown Pittsburgh Pirates. On the side, Frank had a longtime standing wager offer to catch anyone anytime bare-handed, and he never lost. Perhaps he should have played the field that way; he was at best an erratic fielder at first, third, and the outfield.

McCoskey’s game was far better balanced. He batted .312 lifetime, walked 50% more than Thomas and stole 58 bases, a relatively high career total for the era. He led the major leagues in hits and triples as a center fielder for the 1940 world champion Detroit Tigers. Later he sacrificed three prime playing years to the war effort 1943-45, and saw his last five seasons all but destroyed by a 1949 back injury. Barney wasn’t much luckier than Waitkus, everything considered. After retirement, the Lithuanian Irishman became a sales representative in the Detroit area.

Gedman really had two baseball careers, one up to 1986 and the second from 1987 on. During the first he was a two-time All Star Red Sox catcher who handled pitchers well, controlled opponent running games with a strong arm, and hit for good average and power. Then, the authorized story is, a series of the normal catching-related injuries began taking their toll. Unofficially, it is at least interesting to note that 1987 marked a contract dispute that kept him out until May. His average suddenly dropped below .200, and since this magazine is all about ethnic pride, you don’t want to hear the rest.

Further down the list by performance are Eddie Miksis (1946-58), lefthanded pitcher Johnny Broaca (1934-39), pitcher Vytautas (“Vito”) Casimirus Tamulis (1934-41, and winner of our Lithuanian Awareness contest), and pitcher Dave Burba (1990-present). Miksis played for five teams at seven positions, the price one pays for being a .236 lifetime hitter. Broaca and Tamulis debuted almost together for the Yankees, winning 25 games between them for New York in 1935. Both were quickly traded, having been regarded as too individualistic by the conservative Yanks. Yale graduate Broaca closed with 44 victories, Tamulis — 40. 230-pound Burba will move ahead of them with a good season for the Cincinnati Reds in 1997. “Burbs” has the distinction of being the only active Lithuanian American major leaguer.

Given their hopes of playing regularly, this next group was probably somewhat disappointed with their major league experiences. Bill Sudakis (1968-75) was seen first by the Dodgers as the answer to their long-standing third base problem, and later by the New York Mets as the answer to their long-standing catching problem. Their visions were faulty; fairly good power and defense could not offset a .234 average. Infielder Bob Boken hit a home run in his first major league game in 1933, but the descent from there was steep. He went from the league champion Washington Senators in 1933, to the last place White Sox in 1934, to the minor leagues for good in 1935. Outfielder Johnny Dickshot (1936-39, 1944-45) started only for the 1945 wartime Chicago White Sox.

Three moderately competitive pitchers dealt with the reality that they were not going to become stars: lefthander Joe Krakauskas (1937-46), Bruce Howard (1963-68 White Sox et al), and Nelson King (1954-57 Pirates). Canadianborn Krakauskas surrendered the last hit of DiMaggio’s fabled 56 game hitting streak in 1941. Joe K. was 26-36 on the career, mainly for the Senators (today’s Minnesota Twins). Howard and King were too slightly built to handle heavy workloads. When last heard from, the former was running the Bruce Howard Insurance Agency in Sarasota, Florida.

Our final group consists of the people whose response to most any question was, “Great! Glad to be here.” Catcher Walt Hriniak (1968-69) and shortstop Joe Buzas (1945) at least had successful post-playing baseball careers. Hriniak is one of the most prominent batting coaches, and Buzas a successful minor league franchise owner. I remember opening to the newspaper sports page one Sunday in 1966 and reading about lefthanded pitcher Dick Rusteck’s debut for the Mets. Like Tamulis, it was a shutout. But unlike Tamulis, Rusteck never won another game. Pitchers Ed Cole (1938-39) and George Piktuzis (1956) didn’t show their teams anything. 6’-6” first baseman Charles “Cotton” Nash (1967-70) was getting only the briefest of trials from the White Sox and Twins. So the former University of Kentucky basketball star thought he’d give that pro sport a try.

Ah yes, basketball. Great game, great athletes. As the moviegoers say, this is where we came in.

HOW “TEAM LITHUANIA” LINES UP

For baseball fans, it’s a pleasant game to organize a starting lineup from a real or imagined group of ballplayers. It’s not as pleasant to imagine what would happen, say in a computer simulation, if the all-Lithuanian lineup below were pitted against the descendants of larger lands like Germany, Italy, or Poland. The German team, for instance, could field Hall of Famers Gehrig, Ruth, and Mike Schmidt. Johnny Podres is the only Lithuanian to even have been nominated for the Hall.

Perhaps an Olympic basketball structure is in order: Germany, Italy, Poland, and a few others in Flight A; Holland, Lithuania, Sweden, and several more in Flight B. Instantly we look more competitive. There’s still not as much speed at the top of the lineup as you’d want and not as much homerun power in the middle. But teams from Holland or Sweden would probably have similar troubles.