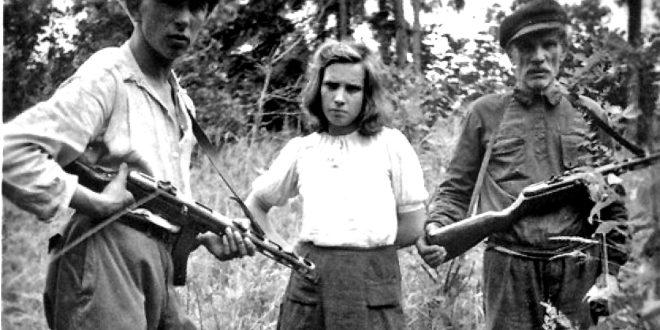 Partisan Vytautas Zakaras-Povas (killed 1956) (left) with two supporters, Aniceta Pupkevičiūtė and her father Petras Pupkevičius in Ukmergė. The father and daughter were arrested in 1949. (All photos are from the Lithuanian Special Archive)

There were Forest Sisters too

Much has been written of the Forest Brothers, Lithuanian partisans who took cover in the woods after the second Soviet occupation of Lithuania in 1944. For nearly a decade they waged a guerilla war against the Soviet occupiers. But what about the Forest Sisters? Although they received less attention, women, in fact, took an active supportive role in the partisan movement. A few fought alongside the men, but many provided sustenance, shelter, acted as lookouts and liaisons. When caught, they suffered imprisonment, deportation and even death.

Lithuanian women partisans are the subject of a new virtual exhibit on the Chief Archivist of Lithuania website. Prepared  by the Director of the KGB Documents Division at the Lithuanian Special Archive, Vilma Ektytė, the presentation showcases photographs, documents, and trial transcripts depicting the stories of individual women who sacrificed their lives for freedom. You can view the exhibit at http://virtualios-parodos.archyvai.lt/lt/virtualios-parodos/34. Choose “Moterys Lietuvos partizaniniame kare.” Although the texts are in Lithuanian, many of the photographs speak for themselves. As a service to our readers, we provide Vilma Ektytė’s introductory remarks, that have been translated by Rasa Varanka McKean.

“I only recognize a free, independent, and autonomous Lithuania, free from control of any foreign state. For me, the partisans are not bandits, but heroic warriors, struggling for their idea, for their noble goal – the freedom of their homeland.” Statement of Vanda Pazukaitė, Panevėžys Girls High School teacher, a partisan liaison in Algimantas County, made to her interrogator on December 29, 1947.

When the second Soviet occupation of Lithuania began in 1944, a partisan war lasting ten years ensued, seeking to restore an independent Lithuania. The traumatic experience of the first Soviet occupation, the repression and terror, deportations, and forced mobilization into the Red Army, energized the national resistance movement. Patriotism and love for the homeland and the belief in eventual Western aid led thousands to join the armed resistance. While most of the partisans were men, women were also actively involved in this struggle. They belonged to the armed resistance units, gave oaths of allegiance, carried weapons, and lived in the underground. Many of the female partisans were related to the men, who were their brothers or fiancées.

Seeking to avoid arrest and deportation, or worse, the women partisans hid in the bunkers, in huts in the forest or at the homesteads of loyal friends. Women occupied important posts in the partisan military structure. Besides being involved in combat operations, they produced and disseminated printed materials, were responsible for collecting intelligence, managing economic affairs, finances, and were involved in uncovering spies and Soviet party activists.

Many female partisans were killed during military operations conducted by the Soviet security. Some of them, not wanting to surrender to the Soviets when discovered in their hiding places, blew up their bunkers and themselves.

Other women who joined the partisans did not participate directly in the armed struggle; instead, they prepared meals, washed and provided clothing, and worked as medical nurses. To protect the women partisans from persecution by the Soviet forces, the partisan leadership helped them acquire needed documents so that they could live legally.

Many girls and women worked as partisan assistants – liaisons and supporters.

Liaisons maintained contacts between partisan leadership, districts, units, and individual squads, organized meetings, transmitted intelligence and documents, distributed printed information, and sought out individuals who could provide needed secret information. Supporters of the resistance constructed underground shelters for the partisans on their farms and monitored the movements of the secret police, troops, and local collaborators, called “stribai.” The patriotic farmers provided partisans with food, clothing, medication, and helped distribute the partisan press.

One of the key strategies employed by the Soviet security structures was the recruitment and infiltration of agents and informants amongst residents, partisans, their associates, and sponsors. Occasionally the path to betrayal was chosen freely. Some were enticed by the promises made by the occupation structures, but more likely, persons were broken down by threats and blackmail. Many freedom fighters and their supporters were killed or arrested because of such betrayals. Punishment for betrayal and the regulations for enforcement are found in the partisan documents.

After the partisans established a unified senior leadership in 1949 (the Lithuanian Freedom Fighters Movement), they adopted a criminal code and authorized to impose the death penalty for espionage and for providing intelligence to the occupation authorities and agencies. It was also applied in cases when coercive measures were executed on behalf of the occupation government. Convictions by the partisan military field courts were also made for women who had betrayed freedom fighters.

In almost a decade, 1944-1953, Soviet repressive structures killed more than 20 thousand partisans and arrested about 19 thousand of them and 12 thousand of their aides. Female partisans suffered the same hardships and atrocities of partisan warfare: arrests, torture, prison camps, exile, and death.

Although the freedom fighters did not reach their most important strategic goal – they did not restore an independent democratic state of Lithuania – the significance of the resistance struggle is huge. In 1940, the freedom fighters proved that Lithuania was joined to the USSR against the will of the nation, and it left aspirations for the freedom of the nation for future generations. In 1990, after the restoration of the independence of Lithuania, the 1944-1953 partisan war was recognized as one of the historically significant foundations of the restored State. The women in the history of the partisan war left impressive examples of courage, endurance, and sacrifice. Many women partisans were awarded Lithuanian State Awards – Orders of the Cross of Vytis, Medals of Volunteers of the Lithuanian Armed Forces for their heroism and dedication to the freedom of their homeland.