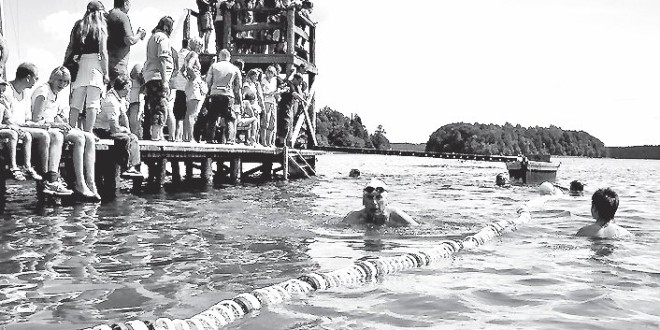 Soon after Lithuania regained its independence in 1991, I traveled there to see for myself what the country of my birth looked like after nearly a half century of Communism. As a self- employed consultant to a particular segment of manufacturing, I also scouted for opportunities to see if my skills could be utilized as Lithuania rebuilt its economy. On that first trip I concluded that there is considerable potential but will require significant capital to make it work. Two years later my non-Lithuanian partner and I were back with plans to build a manufacturing facility for hot forged steel automotive components. At that time I had achieved a decent level of fitness for my age through swimming and I was concerned about my ability to maintain that level during my lengthy stays in Lithuania. I am pleased to say that fourteen years later I have maintained my fitness and the factory was up and running. To understand the entire process, I need to delve into adult competitive swimming, a world-wide phenomenon which is enthusiastically embraced in Lithuania.

There is no other sport that has such a wide range of participants by age. Competitive swimming in officially sanctioned meets at local, regional, national and international levels begins with a single-digit age group children. It continues through high school and college and then passes on to the Masters level, which encompasses adults competing within their own five year age groups. Ages 25–29, 30–34 and so on, every five years to ages 100 plus ( yes, there have been centenarians in Masters meets.) Men and women compete locally, nationally and in Masters World Championships held every two years on different continents.

I fell into Masters Swimming practically by accident when my older daughter Audra, during her junior year of high school, learned about cardio vascular diseases in sedentary middle aged men (that was me in spades) and pushed my couch potato butt out the door to exercise. I tried running, (too painful), tried calisthenics at the local “Y” (boring), adult volleyball (I was no good at it) and finally lap swimming in the local YMCA swimming pool. The rest, as they say is history.The local Masters club adopted me and I swam competitively in my age group for the first time the following year.

Even at the local level Masters Swimming can be challenging. We trained 4 to 5 nights per week, pounding out intervals against a pace clock for 90 minutes per session, always pushing to improve the competition result times. During the fall and winter there were Masters swimming meets at least every other weekend.

When I began to spend time in Lithuania, I needed to find a swim facility. In the cold weather months in Lithuania during the 90’s this was a major problem. With one exception hotels in Lithuania did not offer this luxury. In Kaunas, where I stayed for 6 weeks working with KTU (Kaunas Technical University), I wormed my way into to the Lietuvos Kuno Kulturos Akademija (LKKA) swimming pool now renamed Lithuanian Sports University. This is thanks to Birute Statkeviciene professor at LKKA, whom I had met earlier at the Masters World championship in Montreal. To my genuine surprise I discovered that within this Soviet style 25 meter natatorium there was an organized Masters club called “Vandenynas”. Later I learned that there were numerous local clubs in many Lithuanian cities. There is “Takas”, also in Kaunas, “Nendre” in Klaipėda, “Koralis” – Alytus, “Torpedos” – Marijampole, to name a few. Their members call themselves Veteranai and these swimmers for the most part truly are veterans of competitive swimming in their younger years.

Plunging right in I participated in several of their swim meets. Other than the annual Lithuanian Veterans Swim Championship their local meets are much less structured and formal compared to my US experience. They limit themselves to short distances in all strokes and, because their club memberships are relatively small, their meets start and end on the same afternoon. The emphasis is on individual rather than team results and the swimmers adjourn to the nearest cafe for refreshments immediately after the awards are handed out.

In time I realized that I was witnessing social club fests, the swim meets serving as a justification to get together, to relive old times, to gossip and to have fun. It was also evident that the short distances in their meets attract participants who do not train regularly yet can still blast through a 50 meter distance from sheer memory.

One of my more notable swim events was in Liepaja, Latvia. It was not my swimming but the party afterward, which lasted until midnight that left a deep impression. The toasts, jokes and reminiscences by the Latvians and visiting Lithuanians were all lost on me, because everyone spoke in Russian, their previous common language. Leaving Liepaja I promised myself that I would try to live long enough to see the switch from Russian to English as their common tongue. I am pleased to say it is happening!

Among the Lithuanian veteran swimmers, many have a lifetime dedication to the sport of their youth, who train regularly and compete locally as well as outside the country’s borders. Neighboring countries like Poland, Sweden and others periodically hold Masters Swimming competitions. European Masters Swimming Championship draws thousands of participants from all corners of Europe and the Lithuanian veteran swimmers have participated in them starting in 1991 with impressive results. Birute Užkuraityte Statkeviciene, whom I mentioned earlier, was the first Lithuanian woman swimmer in Olympic Games, in 1972. She has a basket full of European Masters Championship medals, many of them gold and her World Masters.

Summer in Lithuania is God’s gift to an open water enthusiast like me. Soon after my joining the Masters I discovered that sprints were not my best events and I began to favor longer distances. My first open water race was in Toronto in 1985 and I was hooked. In the following years I competed in four mile races in Fox Lake, IL and when they were discontinued the Big Shoulder 5 km race made its debut on the Chicago’s lakefront in 1991. It is held annually in September and that race became my target and my training objective. The amount of enjoyment Big Shoulders race gave me each year depended on the amount of open water training I managed in the months before the race. Insufficient training equals a lot of pain in the last mile.

In Lithuania I was fortunate to experience some of my best training swims. Akmenė Lake near Trakai was ideal. Galvės Lake presents a spectacular duck’s eye view of Trakai castle. While stroking past its island and getting dirty looks from the resident swans is unforgettable, it is also somewhat hazardous thanks to the presence of boats of various sizes.

Hotel Villon,where I stayed just outside of Vilnius is situated between two lakes. The larger of the two, which has no name, was excellent for my training swims. At the crack of dawn, I would chase the sleepy water birds from its surface and crank out a half mile in one direction before I tangled with the reeds, turned around, and did another half a mile practically in a straight line. I calculated the distance on my rubber watch by the amount of time it took me to swim it, not that it mattered much, but this allowed me to keep track of the approximate daily distances.

Villon, to the best of my knowledge was the only hotel in Lithuania with a swimming pool long enough to swim laps. It was not designed for competition but was approximately 20 meters long and served me reasonably well in the winter months. When I stayed in Kaunas, I swam in a man made lake called Lampėdžiai, which runs parallel with Nemunas west of the city and is a stone’s splash away from the main south highway (A5) which I traveled daily to Marijampolė in the later years.

The one Lithuanian open water swimming event not to be missed is an annual gathering in Samogitia called Platelių Maratonas, which was first held in 1982 and takes place every year at the end of July in the jewel of a lake in Samogitia’s National Park. Held at the peak of summer this is a reunion of veterans, and a celebration as well as a holiday for swimmers and their families. It comprises two main events: The first, with the largest group participants, is a race from the Yacht club beach to the castle island, around a row boat to check your number and back. The total distance is 1800 meters.

Less popular and more grueling is the 3.5 km distance swim with a catamaran ferrying the swimmers to the eastern shore. Remaining on board, the swimmers wait for the start signal at the yacht club and jump into the water at the same time as the crowd on the beach dashes into the lake.

A third, unofficial event is fun and games for kids and adults while the awards for the two main events are being compiled by the judges. Events include wash tub races, feet first swimming races, beer barrel carrying races, rope-pull team contest and some spectacular cannon balls and belly flops from a temporary platform. Water fun for all!

I was fortunate that my schedule permitted me to participate in four of these marvelous events, the first one in 1996. In the winter of 2001 I suffered a serious illness on my way home from Europe and was hospitalized for two weeks. I worked harder than ever to recover and to regain my weight and by the end of July I was ready to test myself.

In Plateliai, I signed up for the longer distance and about 15 of us jumped off the catamaran and headed for the yacht club. I was dead last in that group but I consoled myself with the fact that the next oldest person among us was less than half of my age. Most of them were college age and one of them, Dita Želvienė, had competed in the Olympic Games in Atlanta just a few years earlier. My last swim in Plateliai was in 2010, swimming the shorter distance which I used as a kind of a warm up for a 3 km open water swim at the Masters World Championship in Goteborg, Sweden, one week later.

The best illustration of the wide range of ages in competitive Masters Swimming was exemplified at that meet in Sweden. The day before my event I was people-watching at the competition pool. There I noticed a Japanese gentleman about my age standing alone, smiling, holding and admiring a gold medal. I approached him and asked if he would like me to take his picture with his camera. He readily agreed, and as I handed the camera back to him I said: “Congratulations on your gold medal!” He spoke decent English and replied: “No, no, no! This is not mine, it belongs to my mother — she won the back stroke event!”

Previous Lithuania: Image Breakers
Next Parade in Chicago during Thanksgiving