Home - History-1900+ - The Lithuanian Experience: in Search of One’s Roots 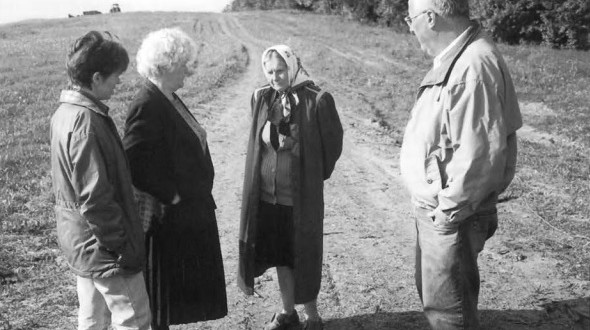 "We found an old lady who took us out to the land —about ten miles of dirt road driving." Bob listens attentively.

The Lithuanian Experience: in Search of One’s Roots

Wanting to find his roots—and the land of his grandparents—  the author goes to Lithuania and discovers some pleasant surprises.

Growing up in a small western Massachuset ts town in the ’50s and ’60s, I was fortunate enough to live my first fourteen years with a pair of remarkable Lithuanian grandparents. It was natural and quite easy to slip from English to Lithuanian depending upon whether you were upstairs or downstairs in our house. After my grandparents died, my Lithuanian language skills went unused for many years. I became an Air Force officer, and in February of 1996 ended a thirtytwo-year career that sent me to the far corners of the globe—except of course Lithuania.

Upon retiring I made a list of places I wanted to see in retirement, Lithuania being high on the list. I subscribed to the Lithuanian Heritage magazine, bought a good map of Lithuania, and decided it was time to discover my roots. Unfortunately the town my grandparents came from was – not on any map I had. The town was Sevelionys. Grandfather always said to remember that “Sevelionys—geri žmones” (“Sevelionys—good people”).

In December of that same year a friend informed me that he knew a Lithuanian couple from Kaunas who would be here six months. As they had no place to go for Christmas, we immediately invited them to spend it with us. Much to my surprise the lady indicated that she knew where Sevelionys was because her mother was from that village.

Needless to say one thing led to another and on the 22nd of May I found myself and my two friends, Danguole and Arunas, on a Finnair flight to Lithuania. My friends told me that three weeks was the minimum required to really see Lithuania. They were right. Remarkably we did not need a dictionary for the three weeks I was there. In spite of not speaking much Lithuanian for forty years, ^my comprehension got better daily. Broken Lithuanian and broken English worked just fine for us.

For those contemplating a trip, I would unhesitatingly say—Go! From my observations there is no reason not to go. I had checked with the State Department’s Baltic Desk and, other than a warning about pickpockets in major cities and possible bad water in remote villages, they had no other negative comments.

Lithuania is a green, green country—rich dark soil and no fences. Friendly polite people in almost all cases who are going through some difficult times these days. The conversion from communism to capitalism has not been an easy one. Some people are living quite well—many others are not. You do see some old people begging. You know times are tough when grocery stores have people posted on each aisle watching for shoplifters of food.

As poor as it is, it is one of the cleanliest countries I’ve ever seen (and I’ve seen a lot of countries). Money and job security are almost a national paranoia as the people fear for their jobs and an unknown future. I met a distant cousin who is retired and living on 220 litas ($55) a month. You wonder how they do it. It would be nice to see some big American corporation arrive with a few thousand jobs. The past banking collapse and some screwy laws are holding back investments.

Prices by American standards are cheap. A good meal out will run $5, assuming it’s not a Western tourist trap. Good buys on linen items, amber, ceramic buildings, and wooden carved items. We visited most of the historic sites in Vilnius, Trakai Castle, Rumšiš­ kes folk life museum, Šiauliai and the Hill of Crosses, the beach at Palanga and the Amber Museum, the aquarium and dolphin show in Klaipėda, as well as the War Museum, Devils’ Museum, and the 9th Fort in Kaunas.

* Trakai Castle, on an island in Lake Galve. Beautiful location and beautiful restoration.

* The bridge at Palanga at midnight. The sun never quite sets and it is just beautiful.

* The Devils’ Museum in Kaunas— the only devils’ museum in the world, and it really appealed to my warped sense of humor.

Biggest disappointment: Rumšiš­ kes. Lot of potential but the old ladies who were showing people around would rather have been somewhere else. Acted like they were doing us a favor to enter the buildings. Need a little of Disney’s pixie dust training.

* Don’t go expecting to lose weight. Potatoes, cream, great bread and tortes, and good beer. Make sure you do a lot of walking.

* Wish I had the franchise on Chicago Bulls items. Every kid in Lithuania seems to be wearing something with the Bulls’ logo.

* Now I know where all the old German cars go—to Lithuania. Gas is about $1.50 a gallon, not bad by our standards but real expensive if you.’re making $100-$ 150 a month. Necessarily a lot of the population uses public transportation.

* If possible visit a sodas or little orchard/garden with country house that all city dwellers seem to own. The Lithuanian green thumb is truly evident here with great cucumbers, tomatoes, radishes, scallions, etc. Also a place where families get together for food, song, and libations.

* There really are a lot of storks in Lithuania. Didn’t see any delivering babies however.

Did I get to see Sevelionys with the geri žmones? You bet I did. The place is not even a village, just 6-8 houses out in the country. Located south of Žiežmariai not far from Kruonis. We found an old lady who took us out to the land—about 10 miles of dirt road driving. Most of the area had been turned into a huge collective farm by the Russians. My Lithuanian friends laughed and asked if I wanted to buy it back. I said no and I’m really glad my grandparents had the foresight to come to America. The best part of the visit was to the little Catholic church in Kalviai where my grandparents worshiped. The setting on a hill overlooking a lake was breathtaking.

Overall impression: Beautiful country with wonderful hardworking people. Extremely poor right now. They really need to get into the EU and NATO or their future will continue uncertain. They are trying but they need our help. There are numerous charitable organizations doing a lot of good, but a lot more is needed.

And to Danguole and Arunas, all I can say is thank you for showing me Lithuania. I will go back. The situation is difficult now but you are tough and resourceful people and things will get better. I know I plan on doing what I can to help. God bless you all!