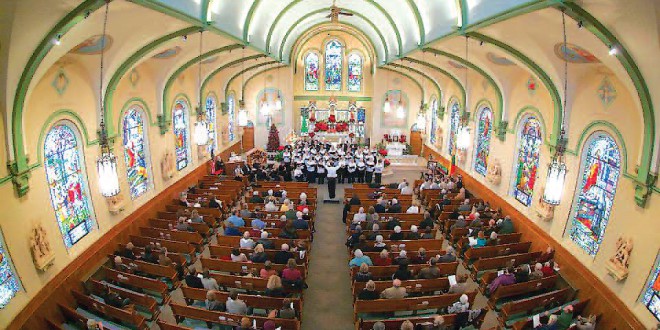 “I would like to thank The Monadnock Chorus for this beautiful concert. Thank you for honoring our country, for representing our culture. Thank You for bringing us together and exposing our wonderful Lithuanian heritage! It is a gift to us!” – extolled Dalia Shilas, one of the organizers of the Monadnock Chorus performance at St. Peter’s Lithuanian Church in South Boston, MA on January 12th.

Founded in 1959 the Monadnock Chorus is is a true “community” chorus, comprised of residents from the greater Monadnock area in New Hampshire. The chorus presents several concerts each year, performing outstanding choral works for the local populace. This year, the chorus chose to present a special winter concert entitled “A Lithuanian Christmas” which was performed in Peterbourough, NH, on January 11th and then, with the support of the Pastor of St. Peter’s Church, Father Steve Zukas, at South Boston’s Lithuanian parish the following day.

The unusual theme for this concert was proposed by Lithuanianborn soprano Jūratė Švedaitė to the chorus’ artistic director Jim Sharrock, who agreed to take on the project. This was quite a challenge, since there were no Lithuanian speakers among the chorus members. Ms. Švedaitė, who is the granddaughter of noted Lithuanian composer Jonas Švedas, joined the choir as soloist.

Instead of well-known traditional Christmas carols, the program showcased complex choral works – the best that Lithuanian culture has to offer. In the first part of the program, thechorus, together with soloist Švedaite, and accompanied by Jeffrey Fuller on the organ, performed “Magnificat” a spiritual work sung in Latin by contemporary Lithuanian composer Kristina Vasiliauskaitė. It was the American premiere of the work. In the second half of the program the chorus tackled difficult Lithuanian pronunciation with aplomb. It sung the works of J. Naujalis, J. Švedas, B. Dvarionas, M.K. Čiurlionis, A. Kačanauskas, J. Gaižauskas, G. Svilainis and Boston local Jeronimas Kačinskas. Berklee College of Music graduate student Simona Smirnova played the kankles, and the Boston Lithuanian folk dance group, Sambūris, led by Tomas Mikuckis, entertained with a selection of folk dances.

Dalia Shilas noted that the concert date in South Boston, was significant to the Lithuanians. “It could not be a better way, time and place for us to honor our fallen heroes – the price we paid for our independence – as we are approaching a very important day in Lithuania’s history, the 23rd anniversary of Bloody Sunday, January 13, 1991, that some of us, including myself, had a chance to experience and witness.”

Picture this – an old Catholic church on a side street in South Boston, beautiful stained glass, a warmth which embraces, a pastor with a gentle soul. A group of “Yankees” descends from the north onto this Lithuanian enclave, bringing with them music from a homeland which is not theirs yet brings tears to one’s eyes. Yes, their Lithuanian is accented…but that only evokes gracious smiles, appreciation of the attempt to sing in a language – your language – not familiar. And imagine you are from a small country which only a few short years ago gained its independence after years of oppression; and here you are celebrating the music of your countrymen, whose names roll off American tongues with difficulty. But… they came to share!

And so it was that on Sunday, January 12, 2014, the Monadnock Chorus graced the sanctuary of St. Peter’s Lithuanian Church in South Boston with its performance of Lithuanian music, both contemporary and traditional. A friend and I, unable to attend their performance in Peterborough, decided to take a “little adventure into the big city” to see what this concert was all about. And what a beautiful adventure it was! That Sunday afternoon something “magical” happened, it was more than just a concert. One could see it in the faces and feel it in the energy that came from those Lithuanian-Americans representing “three waves” of immigrants to this county – pre-and immediately post-WWII, and a more recent surge after the Soviet era – immigrants who appreciate the opportunities they have, who make their own significant contributions to their adopted country, and who can remember – and even have lived through – a time when such a concert would have been considered an impossible dream.

When we first pulled into the church parking lot, three church members from the post-WWII wave happened to be coming out. We asked them if they could direct us to a restaurant where we could have lunch. Before we knew it, we found ourselves at the Lithuanian Club having an absolutely delicious meal and learning about the Boston Lithuanian community. Back at the church there were well over 100 in attendance, spanning several generations. The pastor, Father Steve Zukas, welcomed everyone and then the music began. Whatever your tastes, it would be difficult not to appreciate what this concert represented – a true gift of sharing! The music spanned cultural and generational gaps, creating a sense of respect and goodwill, and demonstrating how in diversity there is unity. This was an event which transcended time and space. Thank you Monadnock Chorus and St. Peter’s Lithuanian Community!