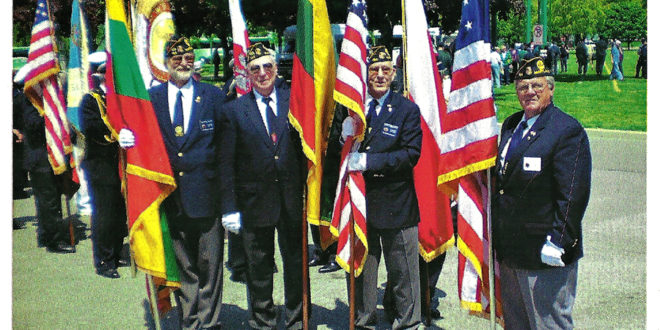 Lithuanian Legion Baltimore Post 154 at the annual Kosciusko Commemoration at West Point in 2010.

One could write volumes recounting the many services which the American Legion and its Post across the United States provide on a daily basis. The American Legion spearheaded the establishment of the Veteran’s Administration and the passage of the “G.I. Bill” which enabled veterans to receive a college education and purchase their own homes.

The American Legion Lithuanian Post prepared and disseminated a commemorative history booklet recounting its history and honoring Lithuanians who served in the American Revolution, War of 1812, the Civil War, World War I and World War II.

The Lithuanian Post 154 has a unique history that predates its founding. Its fifteen founding members were Lithuanian American World War I veterans. Over 10,000 returning Lithuanian American World War I veterans who how had fought to save England, France, Italy, Belgium, the Netherlands were ready to join the ongoing struggle for Lithuanian Independence. Within a year these veterans had formed a Lithuanian Brigade of American WWI veterans and prepared to fight for their ancestral homeland. Regrettably, the United States didn’t support the venture. The fear of American sanctions did not deter these Lithuanian Americans veterans who had just fought to save Western Europe. Thus the Brigade Staff and over 500 members clandestinely traveled to Canada in small groups and made their way to Lithuania. However, the bulk of the Brigade never left the United States.

Among our veterans, 76 were American born to Lithuanian immigrants and 75 were immigrants born abroad. Of these identified veterans 55 served overseas, four were killed in action, five were wounded, and two died of illnesses or other causes. As in the case of most wars, two-thirds of the identified veterans never went overseas but remained in the United States serving in vital support activities or were still in training when the war ended. The third who went overseas served in all types of combat and support capacities. They fought in the trenches and the air above battlefields in France, Italy, and elsewhere. Many served aboard combat vessels keeping vital sea lanes across the Atlantic open to the allies and transport ships transporting our fighting men and supplies to France. Regardless where they served, each one gave something to the struggle, and some gave their all.

The gala event took place in the main ballroom of the Baltimore Lithuanian Hall, where many senior National and State American Legion Officers and representatives from posts around the state joined members of the Lithuanian community in commemorating these historical events. Strains of patriotic American World War I music greeted the arriving guests. On display were three tables of World War I memorabilia and a slide presentation of period photographs documenting the unique history of the founding of Lithuanian Post 154 and American forces serving in that great conflict.

The formal program began with Lithuanian Post Adjutant and Installation Program Chairman, Vincent T. Dulys, called the gathering to order and turned over the gavel over to Commander Joseph S. Jankevičius, who requested the assembled to stand for the Lithuanian and American Anthems, followed by the Pledge of Allegiance. Chairman Dulys then introduced the Post’s honored American Legion guests seated at the head table, which included Leroy Thornton – Past American Legion National Executive Committeeman, Lewis Trott – National Executive Committeeman, Davis Johnson – Maryland Department Commander, James Marchinke – Past Maryland Department Commander, Austin L. Ball Sr. – Baltimore District Commander, Joseph Jankevičius – Post 154 Commander, John Maskavich – Lithuanian Post 154 Chaplain, and Monsignor Arthur Bastress, Retired, St. Alphonsus Church Pastor. Another honored guest, John (Jack) F. Milburn, National Vice President, chose to sit with friends in the audience. Post Chaplain Maskavich gave the invocation. Commander Jankevičius led the American Legion uniformed members in reciting the Preamble to the Constitution of The American Legion. Chairman Dulys announced that the Post today would be unveiling and dedicating an American Legion, Lithuanian Post 154, Memorial Plaque. It reads “We dedicate this commemorative plaque in solemn recognition and remembrance of the courageous American men and women of Lithuanian descent who, since the American Revolution, have served valiantly in the Armed Services of the United States. God Bless them and our country. The American Legion Lithuanian Post 154, 2018.” Chairman Dulys briefly recounted the service of Lithuanian Americans to our nation’s armed forces since the Revolutiony War.  Lithuanian Deputy Defense Attaché Lieutenant Colonel Gražvydas Liubinas, representing the Lithuanian Embassy, Washington, D.C., thanked the American military for the assistance it has provided to Lithuania over the years. Following the remarks by Post Commander Jankevičius and Rytis Grybauskas, President of the Lithuanian Hall, a commemorative plaque was unveiled. Monsignor Bastress read the inscription and blessed the plaque.

The Post honored Police Officer Aisha White-Bay, Fireman Drew Doiron, and Teacher Erin Shurtleff for their outstanding service to the community during the past year and awarded a $1000 Collegiate Scholarship to Madison Cummings. The post’s incoming officers were sworn in. Post Members then conducted their Post Everlasting Memorial Service, which honors its members who passed away during the past year. During the service, Deacon Hugh Mills Jr. prayed and then Bugler Mark Zaruba played a heart rendering version of “My Buddy” and Taps. In traditional Post 154 fashion, Chairman Dulys and Post Members performed their Prisoner of War (POW) and Missing in Action (MIA) Ceremony, to remember their comrades still in captivity and missing in action. The formal program ended following a Benediction by Deacon Mills and singing of “God Bless America.” The assembled then were treated to a Lithuanian feast catered by Rasa Meligienė-Meeks while being entertained by Malūnas the Baltimore Lithuanian folk dancing group directed by Rytis Grybauskas and Egle Noeth to music provided by Lithuanian Melody Time. The festive event continued into the night. It was a splendid commemoration by all accounts.

Previous The Draugas digital archive
Next The Oklahoma Saga Continues