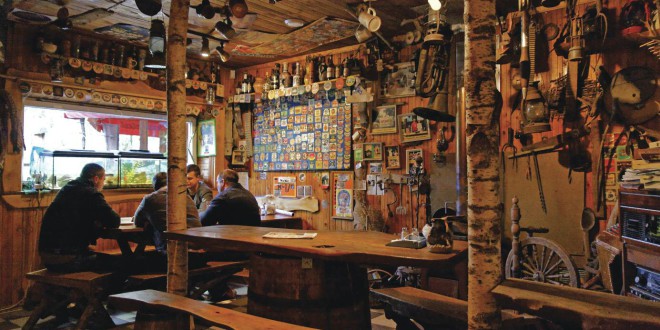 “... a hangout for Bohemians, artists, and others who favor a more alternative lifestyle. And as you can see from the photo, the pub is fairly alternative. It looks like a traditional cottage that's been moved into town, and then decorated with every farming implement known to man.ˮ (Lars Marius Garshol on his blog, http://www.garshol.priv.no/blog/beer/)

It is a great privilege to present the readers of Lithuanian Heritage with an extract of a travelogue written by Martin Thibault, a beer connoisseur and author from Québec, Canada, who traveled to Vilnius and then throughout the Lithuanian countryside, and made some astounding discoveries regarding craft brewing in farms and villages. The complete essay (in French) can be read at this link: http://lescoureursdesboires.com/guides-de-voyage/les-paturages-brassicoles-dela- lituanie-presentation/. For this issue, we have translated the first part of his essay, which deals with the taverns of Vilnius where craft-brewed beer from the backcountry is available.

Throughout Lithuania, since the end of the Soviet era, several dozen microbrewers have sprung up and are making excellent beer. They often utilize rustic and even primitive methods that were often devised out of necessity, improvising during a time when more advanced equipment was not available. The beers made by these traditional Lithuanian brewers have flavors that are unique in the world of beer.

After several months of research, including conversations with Lithuanians who themselves are passionately striving to piece together both the history and the present status of beer making in their country, and after having visited more than twenty farm and village breweries, we believe we’re in a position to offer you a detailed guide and tour of country brewing in Lithuania.

Most people from the countryside of northeast Lithuania will insist that “real beer” begins at an 8 per- cent alcohol content, and many country brewers try to make such “real beer” or what they call “live beer.” In other words, beers with a high or low degree of fermentation that are not filtered and never pasteurized. Such brewers from the Lithuanian north country are making beer for “real men,” strong beers that are sold in plastic bottles of two liters! A number of brewers, however, are moving beyond this particular niche and focusing on producing beer that is easy to drink, but characterized by its own unique flavors from Lithuanian barley malt.

To begin, we emphasize that there are no precise types or styles of beer brewed in Lithuania. The terms explained below do not represent precise recipes or standards followed by multiple brewers. To the contrary, brewmasters keep their methods secret, secrets of beer-making that are carefully guarded and handed down from father to son or father to daughter. So it’s impossible to analyze beers from this region in terms that Westerners understand as a type.

On tasting the brews from various makers, one comes to an astonishing realization: certain barley malts from Lithuania have no resemblance whatsoever to their cousins from Germany, Great Britain, the Czech Republic, or the US. Some intrinsic characteristic of this beer-making region (whether it is the barley, the soil in which it grows, or the technique of making the malt) gives rise to very unique flavors, just like the barley malt from Czech Moravia or Saaz hops from Bohemia imbue almost all Czech lagers with a personality distinct from neighboring beers made in Germany or Austria.

It is in Vilnius, the historic capital city of Lithuania, that one can find the greatest number of places specializing in craft-brewed beer. Sometimes, these are European-style taverns, but in other instances, one finds taprooms decorated in very unusual styles, resembling not at all what one finds in Prague, Munich, or Brussels.

One of the best times to visit the capital city to sample the greatest number of artisan beers is at the end of winter. Every year at the beginning of March, St. Casimir’s Fair attracts hundreds of artisans and entrepreneurs selling various types of folk art and products from the Lithuanian countryside, drawn there by thousands of potential customers who visit the fair and celebrate the occasion. It is an opportunity one can only dream of to meet dozens of country craft-brewers, who are otherwise hidden away in their farms and villages, and to sample their beers without having to venture into hamlets where the inhabitants only rarely encounter strangers. During St. Casimir’s Fair, we were able to sample beers from brewers who refused to see us during our journey through the Lithuanian backcountry several days later.

For this reason, Vilnius, without argument, is the place where a beer lover can discover and taste the largest number of beers produced in this nation. The alehouses we describe below in Vilnius are our favorites. In almost every case, you will find a knowledgeable selection of craft-brewed country beers, as well as other quality Lithuanian microbrews.

Šnekutis Alehouse, Užupis branch (Polocko 7a)
Without a doubt, this is one of the most memorable taverns we have visited anywhere on the planet—no exaggeration. The building itself seems to have been constructed from wood picked up in of a remote cabin that might serve as a location for a low-budget horror film, but this branch of Šnekutis (there are two in Vilnius) offers a selection of craft-brewed country ales unmatched anywhere in Lithuania. Often in casks, or sometimes in counterop kegs, one can find there not only the classic Lithuanian ales of Morkūnas or Jovaras, small backcountry brewers, but also Širvėnos, Davra, and Vilniaus Alus from some of the best microbreweries in the country. The local cuisine is extremely well prepared and the service is friendly, no matter how good or bad your lithuanian language skills. One has the feeling of wanting to become a local here, so convivial and comfortable is the atmosphere.

Šnekutis, Old Town branch (Šv. Stepono 8)
Easier to access than the Šnekutis branch in the self-proclaimed independent Republic of Užupis (which, nevertheless, is in the Old Town of Vilnius), the original branch on St. Steponas Street serves as a retreat for its founder and owner, Valentas. Valentas, in fact, had founded the very first Šnekutis in the village of Pasvalys, in the northeast of Lithuania, a region where a number of traditional beer brewers were active, but now he is actively promoting Lithuanian beer within the capital city. After all, only a small percentage of visitors, Lithuanians or not, take the time to travel to the regions where such beer is made. The décor here is more European, and this branch does not surprise us much as Šnekutis in Užupis and can come across as a bit cold. Nevertheless, the antics of Valentas, who takes delight in making his clients laugh or fear for his safety, with his mustache and acrobatics and zany smiles, animates the place. Plus, its selection of artisan beers is similar to that of the Užupis branch. It was a pleasure to visit both during our tour of the capital city.

Alaus Namai (Alberto Goštauto 8)
Mostly a hangout for students, this House of Beer (Alaus Namai) attracts a free-spirited crowd, open to discover the tastes of backcountry- brewed craft beer. The selection of beers has been made with intelligence, and you can sample beer here from small brewers like Ramuno Čižo and Su Puta. The location, in a basement hideaway, perhaps is less charming than Šnekutis, but the interesting tap handles, the quality of the local cuisine, and the eclectic selection of beers obliges us, with a high priority, to visit this tavern whenever we are spending a few days in the city.

Bambalynė (Stiklių 7)
This “beer cave” serves mostly bottled beer, but it will give you access to brews you would not normally find in the alehouses described above, for they specialize in serving draft beer. Under these ancient archways of brick, set with antique tables and chairs, you will find bottles of the excellent Kupiškio Alus, Butautų, and maybe even Kurklių, if you’re lucky. The prices are very reasonable (something by the way which is true for all the bars mentioned in this report), and the décor makes one want to just relax in one of these subterranean hallways and pass the entire evening with the folk at the next table.

Other stops worthy of mention
If you have any time remaining, and are still thirsty, there are several other places where you can find quality Lithuanian beer. The tavern Vilniaus Alus, for example (Pilies 6) offers its own microbrewed beers, ranging from Kvietinis (a wheat beer with a unique character) to surprising, ultrastrong beers. The city also houses several brewpubs, like Prie Katedros (Gedimino 5) and the Busi Trečias (Totorių 18), which make good, albeit somewhat generic, ales. But we urge you to visit first the four premier establishments mentioned above before these brewpubs, which don’t really possess sufficient character to anchor them in the tradition of Lithuanian craft-brewing.

This is the first of a five-part series. In subsequent segments, Martin describes his visit to the Lithuanian backcountry and some of the unique characteristics regarding beer making that he found. More to come in the Jan/Feb issue of Lithuanian Heritage.

Previous The culture of the the Lithuanian pirtis is impacting both sides of the Atlantic
Next Saulute: A Repository of Precious Childhood Memories