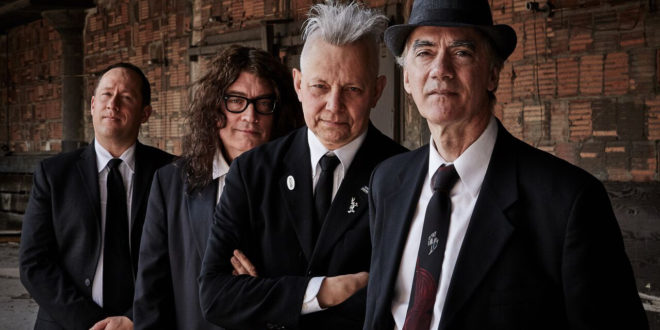 DEAD FREDDIE is ALIVE and IN THE HOUSE!!!

What do you really know about that guy who once lived down the block? Especially if he’s older and your paths didn’t usually cross. He seemed like a regular guy growing up in the 60s and 70s on Chicago’s southwest side, in the Lithuanian enclave known as Marquette Park. The years rush by, and then you see him again at a Lithuanian event and say hello in passing. That guy was my one-time neighbor Donatas Ramanauskas. When I ran into him, years later, he was involved with the Lithuanian Scouts. He was married with two grown daughters. He seemed like a good, clean-cut, responsible  man leading a normal, low-key life. I would never have guessed that he had another, not so ordinary, existence!

It was Ruta Grigola Spencer who notified Draugas News that a Lithuanian band named “Dead Freddie” was featured in the June 18, 2019, issue of the Chicago Reader. (The Chicago Reader is an alternative weekly newspaper, covering Chicago’s music, theatre, and art scene.) The piece was titled, “Lithuanian American power poppers Dead Freddie defy their own demise.” Dead Freddie was featured in a section called “Secret History of Chicago Music – Pivotal Chicago musicians that somehow have not gotten their just dues.” A line art drawing of the band members accompanied the article. There he was, my ex-neighbor, Donatas Ramanauskas, and another guy I knew, Vainis Aleksa. I had no idea!!!

So I contacted Donatas to get the full story. It all began with a hugely popular 70’s rock band, KISS, and their tribute band named Mist. They inspired Ramanauskas and Aleksa to start their own group. Ramanauskas (vocals) and Aleksa (guitar) started playing in 1978 at community events as a cover band, playing songs from The Who, The Beach Boys, Iggy Pop, and the like. In 1979 the group was fully formed adding members Juozas (Joey) Mikužis (drums), and brothers Vitas (bass guitar) and Algis (lead guitar) Plioplys. Jeff Wolowiec, a friend from Quigley South High School in Chicago, came up with the name. No hidden meaning – they just needed a name. Most importantly, Ramanauskas said, the name should not begin with the typical “The…” And so Dead Freddie was born.

All the original Dead Freddie members shared a Lithuanian heritage and participated in Lithuanian activities: folk dance groups, youth choirs, and Lithuanian Scouts. Most attended, the then-functioning Nativity BVM school and the Donelaitis Lithuanian Saturday School. The latter school was located in the McKay public school across the way from Lithuanian Nativity BVM Parish.

The band members learned Lithuanian folk and patriotic songs at the Donelaitis School. Their musical tastes developed with time: they followed radio’s top 40 hits and then later WXRT – 93 FM radio, a still respected Adult Album Alternative (AAA), Blues/R and B, Soul radio station. In addition to playing the guitar, Vainis Aleksa was the group’s principal songwriter. The original band was influenced by the Beatles, Bruce Springsteen, Led Zepplin, Van Halen, and Ramones. Currently, the band’s influences are more varied, covering Punk, Metal, Classic Rock and Country music. Donatas Ramanauskas, the group’s vocalist and occasional songwriter, also plays the accordion, initially incorporated into their music in 2016. Dead Freddie is presently considered to be a Punk Pop band with some SKA influence. Punk is a louder, more aggressive form of Rock music. The pop influence makes it more melodic. SKA, according to Wikipedia, originated in Jamaica in the late 1950s and is a precursor to reggae, combining elements of Caribbean mento and calypso with American Jazz. A unique sound for sure!

A few months later on July 4, 1980, the band performed at the now-closed Knights of Lithuania Hall on 44th Street in Brighton Park. The 6th International Lithuanian Folk Dance Festival was in full swing in Chicago that weekend. After 10-12 hours of rehearsal, with another long day of rehearsals scheduled the next day, about 600, still energetic Lithuanian folk dancers and their friends, from all over the world, crowded into the Knights Hall. Records must have been broken since the occupancy limit for the Hall was about 200. Dead Freddie’s exposure grew. They went on to perform at the annual Lithuanian Days on 69th Street. Other gigs included the famed Cubby Bear, Huey’s and the Marquette Theatre. By 1982 the two founding members, Ramanauskas and Aleksa, got jobs outside the music world. They left Chicago for Detroit and Germany, respectively, and the group disbanded.

I asked if the band had any issues with alcohol or drug abuse, which is sadly common in the music world. Seeing friends go down that road had an impact on the band. Ramanauskas also credited their Lithuanian Scout training, with keeping them on the right track, especially the 10th rule: “Skaistus ir Blaivus” (Remain Chaste and Sober).

In 2011 at the Lithuanian Scout camp Rakas in Custer, Michigan, Laura Lapinskienė reminisced about Dead Freddie and suggested they play again. Aušra Petry dared Ramanauskas to get the band together as a fundraiser to help defray the cost of a planned Lithuanian Scout trip to New Mexico. However, none of the original members, except for Ramanauskas, were able to return. So, new members were found. In 2011, the line up included Ed Saulis (who played through 2016), Tom (Mulz) Mulhern (through 2013), Regina Ramanauskas (Donatas’s daughter who plays intermittently) and Terrence (TJ) Petry (through 2013).

I had the opportunity to chat with TJ Petry about his playing with Dead Freddie. In 2011, he was a high school junior and was already in a band when Donatas Ramanauskas recruited him. Ramanauskas was TJ’s Lithuanian Scout Troop leader, so how could he say no? Actually, it was an easy “yes.” TJ likes Punk and Heavy Metal and said the experience was a blast. The other young band member was Regina Ramanauskas, also in her late teens. When I asked him about groupies, TJ laughed and said, Donatas Ramanauskas’ wife Rasa was a loyal supporter. He recounted that during their second performance the band dedicated a song to her. TJ had to leave the group when he went off college as the four-hour drive every Saturday for practices would have been too much. TJ just saw Dead Freddie perform in December 2018 at a club named Cigars and Stripes in Berwyn, Illinois. He recalled that the band sang a Lithuanian folk song “Kaip gražu miške” (How Beautiful it is in the Woods) to the mostly American crowd. It was well-received. The song refrain “ha, ha” got everyone singing. Dead Freddie has two other Lithuanian songs in its repertoire: “Ant kalno mūrai” translates as “Stone Castle on the Hill” and figuratively “Warriors on the Hill.” It’s about a young man and his friends riding on horseback to court a young lady only to be rebuffed. The other Lithuanian song, “Trys milijonai” – “Three Million” is Lithuania’s sports anthem, rooting for the underdog, and refers to the approximate population of Lithuania.

Here’s some breaking news: a new, original Lithuanian love song, written by current band member and songwriter, Gintas Buinevičius, will soon be introduced. Buinevičius, who joined Dead Freddie in 2013, is pictured at the far right in the Chicago Reader’s line art drawing of the band members offering a link between the original five members and the current band lineup.

Over the years, other band members included Ziggy Mikužis (Joey’s brother) (2012- 2013), Julius Lie­tuvninkas (2013-2015), Leonas Putrius (2013-2016), and Nick Du Bois ( 2015- 2016). Max Crawford of Poi Dog Pondering, laid down trumpet and trombone on two songs on Dead Freddie’s self-titled LP “Dead Freddie.” Others performed for one show. Interestingly, both Putrius and Buinevičius had seen the original Dead Freddie perform in 1981, never thinking they would one day be part of the group. Another interesting connection: Buinevičius also played with Lithuanian singer/songwriter, experimental/piano rock, eclectic musician Vyto B in Vyto Beleška’s Virtual Reality 2009 line up. Vyto B was also featured in the Chicago Reader’s “Secret History of Chicago Music” in the September 4, 2013, issue.

The current Dead Freddie lineup includes Stephen Foley and Joe Wood (both of whom joined in 2016), Gintas Buinevičius (joined in 2013) and the one original member, Donatas Ramanauskas (since 1978). Buinevičius and Wood have played in a few bands together, including The Repeats and The Spindles.

Dead Freddie has been playing at various clubs mostly in the Chicagoland area including Fitzgerald’s, Underground Lounge, and Live Wire. Most recently they performed at O’Neill’s Pub on June 29 in Lombard, Illinois. They opened for Off Broadway in February 2019 and The Dickies in March 2019 at Reggie’s Chicago. An out of state show in 2016 took them to the Beachland Ballroom in Cleveland, Ohio.

The band has made quite a few live radio appearances including WXAV (St. Xavier U), WZRD (NE Illinois U), WLUW (Loyola U). They have gotten radio play on SiriusXM satellite radio station “Little Steven’s (Van Zandt) Underground Garage, on the monthly Friday Night show “Goldie’s Garage,” hosted by Genya Ravan. Their songs “Mary’s Waiting” and “Cliché” were featured with positive reviews by the host. They were also featured on June 22, on WGN Radio on the Mike Stephen Show – “Outside the Loop.” Steve Krakow, the author of the Chicago Reader article, discussed Dead Freddie on air. You can hear the full interview on Dead Freddie’s Facebook page, posted June 23, 2019.

Dead Freddie has two music releases: a six-song EP (Extended Play) “If I Knew What I Wanted” (2016), recorded at Bricktop Studios, Chicago, and a 12-song LP (Long Play) “Dead Freddie” (2018) recorded at Sonic Palace, Oak Park, Illinois. Heads up: they self-funded these releases and are looking for an independent label to pick them up.

The Dead Freddie LP was recently reviewed by Mike Tomano’s  Music is My Life, who wrote, “An excellent collection, produced by the always musically adventurous Matt Mercado.” (Mercado is a sound and mixing engineer and owner of the recording studio, Sonic Palace. He was also a band member of Daisy Chain, Mindbomb, and Supermercado.)

Today a measure of success for Dead Freddie is competing successfully for recognition with other younger musicians. Plus they’re having fun. You can acquire Dead Freddie CD’s and vinyl records through CD Baby at www.cdbaby.com or directly thru their website: www.deadfreddie.com.

To find out more about the group, follow them on Facebook and  sign up for their newsletter. Check them out live: upcoming performances are on August 8, 2019, at Montrose Saloon in Chicago and on October 26, 2019 (a Halloween themed show) at DZ Records in Hickory Hills, Illinois. To book them for your special event, contact Donatas Ramanauskas at info@deadfreddie.com.