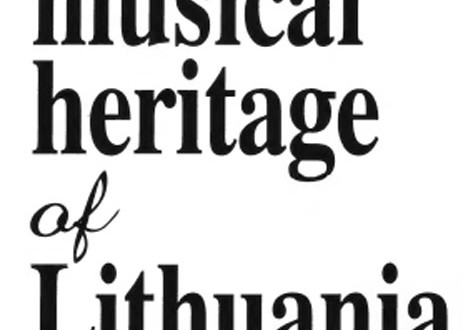 Folklore: the Musical Heritage of Lithuanian

THE MUSICAL HERITAGE OF LITHUANIA

Lithuanian music ranges from the most archaic forms of folk music to the more stylistic compositions of today. Throughout the centuries music has accompanied Lithuanians on every sort of occasion. There were songs, called dainos, for the daily tasks of reaping, herding, plowing, milling, spinning and weaving. In addition, there were repertoires for weddings, christenings, funerals and other festive occasions which included beautiful laments, lullabies and ballads. For the most part the lyrics are connected with love, farming, family life and nature and a random list of titles indicates the simplicity of these songs. Many of the titles are very charming and perhaps I can quote a few: “Get up daughter, don’t sleep”, “We’re cooking, cooking porridge”, “The fir tree was growing in the grove”, “Swing and throw me up, sisters, very high and very far”, “The sparkling dawn is rising”, “Oh you falcon”, “The cuckoo came flying from afar”, “Why are you so sad, dear guelder-rose?”, “I saw my sweetheart go”, “Spin, girl, the white flax”, and thousands more. In fact the catalogue of Lithuanian folk songs published by the Institute of the Lithuanian Language and Literature includes 200,000 songs! Most of these songs are lyrical, restrained, modal pieces with very irregular rhythms and free meter. The regions of Lithuania have developed their own unique styles. South eastern Dzukija is known for its intricately ornamented, melodic, monodic songs while north western Žemaitija has songs which are improvisatory and rhythmically free. A unique form of polyphonic “rounds” called sutartines are featured in north eastern Aukštaitija. The individual voices in these songs interact contrapuntally and imitatively, often resulting in major seconds, sevenths and tritones, defying traditional harmony and sounding very dissonant. The rhythms are syncopated. These sutartines represent the most original and ancient of Lithuanian folk songs.

Instrumental folk music is not as rich as the vocal tradition, probably because so much unaccompanied singing was done. Research in instrumental music came late. Few musical compositions were written down and, sadly, many jg instruments were lost. One of the oldest Lithuanian string instrument is the kankles, a psaltery, and according to pagan legend its melody is the ° voice of a dead soul. Constructed of wood in the form of a trapezoid, the oldest ones had only five strings. Today, they come in all sizes with many more strings, often constructed by the musicians who play them. The wind instruments include the birbyne, a hollowed out wooden pipe with an animal horn attached to the end as a resonator. There are also wooden trumpets, daudytes; a flute-like pipe, lamzdelis]; clay whistles, molinukai; and the buckhorn, ožragis. The panpipes, skuduciai, of the Aukštaitija region are mainly used to perform polyphonic sutartines. Each of these pan-pipes produces a single pitch and are often played by a group of young girls. The main percussion instruments are the tuned wooden troughs called skrabalai and tabalai which are various sized planks producing different pitches. In more recent times accordions, concertinas, violins and drums have been added to folk ensembles to increase the volume of the music, especially when large gatherings of people are dancing.

There are many folk groups in Lithuania which also include ensembles of children and older people. Standards of performance vary considerably which is to be expected. While more remote villages may have some weak groups, wonderful singing can be found in the larger towns. These often include music teachers, trained voices and professional musicians. Universities, colleges and, of course, the music schools continue to act as breeding grounds for traditional music, singing and dancing. On formal occasions groups invariably dress in the national costume of the region. The women’s clothes are particularly colorful while men’s attire is elegant but more subdued. The young girls in their traditional crowns or wreaths of flowers look lovely and add great charm to a musical or dancing occasion. Dressed and crowned in such a manner it has been said that a plain girl can only look pretty and a pretty girl shine like an angel.

There is a large number of folk dances. The more complicated ones are nowadays confidently danced only by well established groups. But there are many that are easy to learn and these are danced by practically everyone. As such, they are folk dances with a real meaning. They have a wonderful rhythm, the steps fit the music comfortably and many of them are full of humor, charm, vigor and sensuality. There are several dances especially for children, actually called “singing games”, and at any gathering the musicians will never forget to include a selection for the young ones. Like Lithuanian songs, singing games are connected with domestic and farm work, nature and members of the family. A list of titles includes: “The poppy”, “Little Georgie”, “The rabbit”, “The weaving lass”, “The jumpy one”, “The mosquito”, “The sparrow”, “I was sent”, and “Wee Mikita”.

In 1911 over 200 dances or singing games were published by Matas Grigonis. These included some special dances for men like “The yoke” which depicts plowing with oxen. In the “Axe dance”, men encircle a girl holding an ax and sing. When the girl throws the ax in the air, the man who catches it is entitled to kiss her. “The wreath of rue” is a special dance for women. The oldest women’s dances were serene and slow but only served to enliven the singing such as the songs about the rue and the flax. “The swallow” is a lovely dance and described so well by the Danish author, Age M. Benedictsen in 1895. “I have seen this dance one summer evening in a little birch grove. Couple behind couple take up their positions facing each other. They swing around, pass through, quick as a flash; so that they remind one of the swallows’ twisting and rapid flight”. This is the girls’ farewell to the swallows flying to warmer lands.

The Soviet period resulted in a controversy connected with folk music and dancing that continues today. During that period the authorities encouraged the formation of large, semi-professional groups that gave performances of what came to be known as “stylistic” folk music and dancing. Their musical directors and choreographers took traditional music and dances and rearranged them for stage shows. Often these performances contained musical and dance compositions that had very little to do with the old culture of the villages. The musicians and dancers were dressed in clothes of a much more showy design than the genuine national costumes. Traditionalists abhorred this development and today still regard it in a very negative way. But stylistic performers never claim to represent traditional folk culture and I think the controversy is quite unnecessary. Surely both forms can have their place.

I suppose the strongest and immediately obvious characteristic of Lithuanian dancing, in common with that of other Eastern European countries, Russia, Ukraine and Georgia, is the element of fun. There is a lot of foot stamping, boisterous behavior and a lot of smiling. Everyone can join; young and old, expert or novice, dressed as you are and with any partner of your choice — or otherwise!