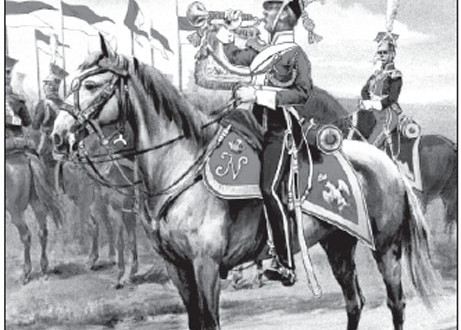 The article by Vytautas J. Šliūpas about “Napoleon’s First and Last Steps in Lithuania,” and the report of the discovery of the mass grave of Napoleonic soldiers in Vilnius—both of which appeared in the July/August 2002 issue of Lithuanian Heritage— stirred more interest among readers of this magazine than any other article in recent years. A number of readers inquired about the role the Lithuanian military played in Napoleon’s Russian campaign, the type and number of military units, their leaders, and so on. The following article by Ilya Kudriashov, which appeared on the Internet, should answer these and many other questions. It is worth noting that most of the officers who commanded the Lithuanian units came from some of the most distinguished aristocratic families of Lithuania. After the failed campaign, many of them retreated to western European countries where they settled and contributed to the enlightenment of those countries. — The editor.

ON 24 JUNE 1812, THE FRENCH ARMY invaded the Russian Empire near Kaunas, Lithuania; by midday 28 June the 8th Polish Lancers under the command of Colonel Prince Dominick Radziwill (Dominikas Radvila) entered Vilnius, the ancient capital of Lithuania. On 1 July 1812, Napoleon re-established the Grand Duchy of Lithuania with its own government. The Grand Duchy was divided into 4 departments: Vilnius, Grodno (Gardinas), Minsk, and Bielostok (Baltstogė). Alexander Sapiega was named Chief of the Military Commission. Napoleon ordered the Grand Duchy to form its own army on 5 July. The army was to consist of 5 infantry regiments organized along French lines with 3 battalions of 6 companies each (with a total of 2005 enlisted men) and 4 cavalry regiments each with 4 squadrons with 2 companies in a squadron (940 enlisted men). An additional 500 men would be recruited from Lithuania into the 129th Line and the 2nd Illyrian Regiments.

On 5 July, Napoleon signed a decree to form a regiment for the French Imperial Guard from Lithuanian volunteers. This regiment became the 3eme Regiment des Chevaulegers Lancier (light horse lancers). The regiment was to consist of 5 squadrons of 2 companies each for a total of 1280 men (62 officers and 1218 enlisted men), however only 4 squadrons were formed. Major General Konopka of the 1er Regiment des Chevaulegers Lancier de la Garde Imperiale was named commander of the newly formed regiment.

At the end of August Napoleon assigned the following officers as the high command of the Lithuanian Army:

On 25 July and 1 August 1812 the Lithuanian government ordered the departments to provide the following recruits:

Length of military service was established at 6 years. Mobilization began immediately with the last day for accepting recruits being 25 September. Lithuanian regiments were to have the same numeration as the Army of the Duchy of Warsaw, but they were to be independent of it.

By the end of September the army was completely formed:

Colonels were selected by Napoleon from the rich and nobles families of Lithuania, while majors were Polish officers.

On 2 August, Litowski Kurrier published a call to Lithuanian Tartars to form a volunteer regiment. Lieutenant Colonel Mustafa Mirza Achmatovicz, of the Duchy of Warsaw Army was appointed commander of this regiment, but only one squadron was definitely formed. It was attached to Konopka’s 3rd Lancer Regiment of the Imperial Guard.

On 12 August, the government was ordered to form 6 battalions of jaegers (riflemen), of whom two-thirds were to be forestguards. A jaeger battalion consisted of 6 companies, 9 officers and 130 men in each.

In November, a decision was made to organize the battalions into 2 regiments, but only the 1st Regiment (consisting of the 1st & 2nd Battalions) under Colonel Kossakowski, was formed in Minsk. By December, the 3rd Battalion was still forming in Vilnius, while the 4th Battalion had only commenced recruiting. The 5th and 6th Battalions remained on paper.

A landowner, Ignace Moniuczko (Ignacijus Moniuška), had received permission to raise at his own expense the 21st Chasseurs a Cheval Regiment. Moniuczko became its colonel. However, only one squadron was formed. Rudolph Tisenhaus (Rodolfas Tizenhauzas) also formed at his own expense a horse artillery battery. In Minsk, another infantry regiment—the 23rd—was being raised, because the number of recruits and volunteers exceeded the numbers needed for the other regiments. A Guard of Honor of 20 young men under the command of Prince Gavrila Oginski (Gabrielius Oginskis) was formed for Napoleon. This detachment accompanied Napoleon to Moscow.

On 1 July, Napoleon ordered the formation of the National Guard of  Vilnius, consisting of 2 battalions of 6 companies each, with a total of 1450 men. Kozielskis was named its colonel, while Francezon and Zakrževskis became chiefs of battalion. One-third of the troops were armed and equipped by the city’s authorities, while the rest were equipped at the individual’s own expense. Every Sunday, they were trained by Polish officers. Like Vilnius, other departments also formed a National Guard, but with less success. By the end of November, in Vilnius only 826 men had been recruited, while in Grodno 290 men. In Minsk, the National Guard was in name only.

On 1 July, a gendarmerie (military police) was established. Each department was assigned a colonel:

Each department was divided into districts and each of the 33 districts had a company of gendarmes, for a total of 3541 men. By mid-November, the gendarmerie had only 1800 men, with 608 men in Vilnius, 856 in Grodno, about 250 men in Bielostok, while Minsk had only 71 men with 19 horses.

At the end of November the main party of Lithuanian troops were assembled in Vilnius: the 18th, 19th, 20th, 21st Infantry Regiments; the 17th, 19th, and 20th (only 2 squadrons mounted) Lancer Regiments; the 21st Chasseurs a Cheval Regiment; the 3rd Jaeger Battalion; and the horse artillery battery. The 22nd and a weak 23th Infantry Regiments; the 1st Jaeger Battalion; and the 18th Lancers were in Minsk under the command of General Kossecki (Koseckis). General Konopka’s 3rd Guard Lancer Regiment and the Tartar Squadron remained in Warsaw. Not counting the Guard and Tartar cavalry, the Lithuanian army numbered 18 infantry battalions, 15 cavalry squadrons, and 1 artillery battery for a total of about 16,000 men. Additionally the National Guard and the Gendarmerie numbered around 3000 men.

Kossecki’s troops (5 battalions, 4 squadrons—about 3500 men) were directed by Minsk’s governor general Bronikowski to Novosverzhen(?) to defend the Niemen (Nemunas) crossing. On 13 November, the Lithuanians were defeated by the Russian infantry under General Lambert and were forced to retreat. The next day Kossecki’s troops were completely destroyed, with the 18th Lancers being overcome by the Zhitomir Dragoons Regiment. The Russians took about 2000 prisoners.

The 3rd Guard Lancers were attached to the VII Corps (Saxon) which fought at Volhynia. On 19 October, the regiment was suddenly attacked in Slonim by Russian General Chaplitz and was completely destroyed. General Konopka, 13 officers, and 253 men were captured. On 22 March 1813, the 3rd Guard Light Horse was disbanded and the remnants became the 7th Squadron of the famous 1st Chevaulegers Lanciers Polonais of Napoleon’s Imperial Guard. The Tartars became the 15th Company (French squadrons consisted of 2 companies), but on 9 December 1813 it was attached to form the new 3rd Eclaireurs (Scouts) Regiment.

The 18th and 19th Lancers fought at the Berezina River on 26–28 November, and then took part in the defense of their capital—Vilnius.

By January 1813 the Lithuanian army numbered about 6000 men and 2000 horses. The infantry regiments were ordered to garrison at Fortress Modlin near Warsaw and successfully defended it until 25 December 1813. The 20th Lancers, along with a small number of the 19th Lancers became part of the Dantzig garrison and were incorporated into the 9th Polish Lancers. The 21st Lancers (Moniuczko’s regiment) was incorporated into the 5th Polish Chevaulegers, while Tisenhaus’ battery was taken into the Polish artillery. The 17th and 19th Lancers, under command of Colonel Rajecki (Michail Tyszkiewicz was sick and rested in Lithuania) took part in the campaign of 1813–1814 in Germany. On 12 February 1813, the 17th Lancers were attacked at Zircke and defeated. In this clash, the commander-in-chief of the Lithuanian troops, General Romuald Giedrojc, was captured. The 17th and 19th regiments continued to fight near Hamburg as part of the XIII Corps under the command of the famous Marshal Davout until April 1814.