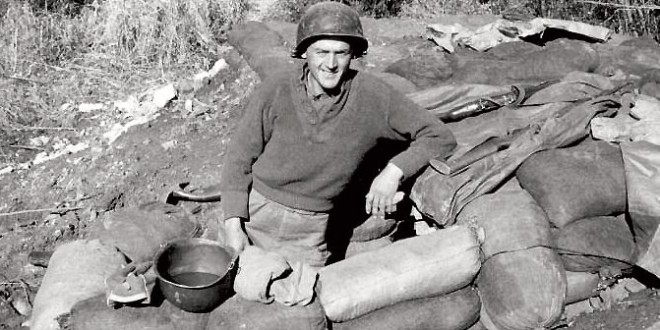 A confluence of this summer’s Lithuanian song Festival in Chicago and ongoing news reports about North Korea rattling sabers at south Korea and America rekindled memories of my army service in the Korean war. In the trenches, I experienced the good, the bad and the ugly. Enemy artillery killed our battery commander, and many were wounded. Of the five soldiers in my unit, one was seriously injured and another suffered a nervous breakdown. Many wounded soldiers were quickly removed from the front lines. Allow me to share a memorable incident from this war, euphemistically termed a “police action.”

I arrived in the U.S. (from the DP camps of Germany) with my parents and five sisters in 1950. I had barely landed when my American cousin Natalie informed me that all men who had attained the age of 18 were required to register with the Selective Service. This was news to me; I had no idea what to do. Natalie accompanied me by bus to downtown Chicago where I registered. In a few weeks, on June 25, 1950, the Korean War started, and two months later I received word that I had been drafted. I passed my physical and then waited.

I celebrated my first Christmas in the United States and soon after New Year’s, I received my induction papers. I arrived at the designated location. There were about 100 of us there. Still in civilian clothes, we were sworn in and then taken by bus to Fort Sheridan, north of Chicago. That’s how I began my life as a soldier. We were issued uniforms and were introduced to military regulations. Within two days, we were on our way southward to Camp Chaffin, Ark. I was assigned to a tank battalion consisting of three Lithuanians, a Latvian and a Ukrainian — five displaced persons from the war in Europe in the midst of all the Americans.

Military training, which included a variety of weapons–from rifles to mortar cannons–was not especially difficult. My family’s flight from Lithuania had prepared me for a spectrum of difficulties and horrors: bombings, shootings, food shortages, lack of sleep. Immediately after the war, I had attended high school in a Lithuanian DP camp in Germany and became an active member of the Lithuanian Scouts. That’s probably why military training came much easier to me than to some of the local Americans.

After boot camp, still essentially novices, we found ourselves on an army base out west, in Seattle, Wash. From there at five o’clock in the evening with an orchestra playing a farewell march, we set off by ship across the Pacific. Taking in the wide expanses of the open waters, I mulled over the strange course my life had taken. Just one year earlier, I had sailed across the Atlantic to my new home, only to be sailing across the Pacific to the other end of the world. What could be in store for me? At this juncture, I don’t recall how many weeks we sailed — it seemed interminable. Finally we docked in the harbor at Yokohama, Japan.

A train took us across Tokyo to Camp Drake.From this base, one could clearly see the snow-covered peak of Mount Fuji. Immediately, we were outfitted with winter gear, a steel helmet, and an infantry rifle. We reached South Korea by boat and then hiked to the barracks. In the morning after breakfast, with ten soldiers per truck, we moved toward the front, about 40 miles away. We were talking, even joking, but as we approached the front and heard artillery fire, a deadly silence overcame us.

Total darkness enveloped the mountains in front of us. As we traveled onward, intermittently the truck would stop and one or two of us would be ordered off and assigned to different units. I ended up at the artillery battery headquarters, where the sergeant directed me to the liaisons department, since battery had a sufficient contingency of soldiers. The commander advised me I would be a scout and messenger on the front lines.

…something rang familiar. A choir
was singing and the words … the words
actually sounded Lithuanian…because
they really were Lithuanian.

During the following two weeks, I would serve in the district artillery section. Liaison duties were rather complex, since we had to maintain communications between the battery and the front lines. If the telephone lines were cut, especially by artillery shells, we were responsible to go out, find and repair them, often communicating with headquarters via field radio. Whether it be night, cold, rain, or snow, the job had to be done. I’d take my rifle, extra cartridges, and a field phone as I went out to search of downed telephone wires. I had to be careful of mines. If I heard explosive enemy fire, I’d automatically fall to the ground.

One day, returning from the front to my bunker, I was summoned to battery headquarters. I thought, “What have I done now?” I immediately asked the staff sergeant, “Are you going to grant me American citizenship?” He answered, if you’ll stay in the army for a year, then you’ll qualify for U.S. citizenship. I did not agree. Then, for some unknown reason, he began to berate me (later I learned, that he was merely joking), and then went to the corner of the room and brought back a box, which he gave me.

In large letters, the box read: “Zenith Transoceanic Radio.” I then recalled that a few weeks earlier a lottery had been held. I was completely uninterested, but my buddies had pulled a dollar out of my wallet and entered me in it. And I was the winner! Even now I recall the enthusiasm of my friends at this win. Instead of explosions, they would be able to listen to music. The radio was powered by a battery; it was also clean and shiny and new, totally out of place in the grimy bunker.

Our cold winter days and nights in the bunker were instantly made more livable by my new radio. We listened to music from fashionable dance halls like the Aragon in Chicago, from New York and other American cities, and over the world. One cold winter evening, as I huddled in my grim bunker scanning the frequencies, something rang familiar. A choir was singing and the words … the words actually sounded Lithuanian…because they really were Lithuanian. I was overwhelmed with emotion. So many years later, I can’t recall the name of the song or the precise words, except they kept intoning “Lithuania, my Lithuania.” I do remember that the choir was conducted by the noted composer Jonas Švedas. The name was easy to remember because at the Lithuanian DP high school in Germany, my friends nicknamed me “Švedas” (the Swede).

Then the choir sang a familiar song that we scouts would frequently sing around the campfire in Germany “Ant kalno karklai siubavo” (The willows swayed on the mountain).” I felt so close to home–just like I was listening to a Lithuanian Song Festival. But a new artillery barrage interrupted and put an end to my concert. I was ordered to perform emergency repairs on downed telephone lines. Outside it was dark, wintry. How I longed to return to the bunker and listen to my songs, but, alas, I had more pressing matters to attend to.

Oftentimes, we listened to Armed Forces Radio Network. The station broadcast the latest news, music and plays. Once, when I tuned in, I heard the names, Antanas, Jonas, Petras, Vytautas. “What’s this?” I thought. It was a radio play in English about Lithuanian freedom fighters — the partisans or “forest brothers.” My American friends knew nothing about them. I explained that they were young Lithuanians who had taken up arms and taken refuge in Lithuania’s vast forests to fight against the Soviet occupation.

It was incongruous: there we were in Korea, trying to halt the Communist onslaught, while in Lithuania, men just like us—just like me — were fighting as partisans against the same enemy. But there I was, a Lithuanian with a band of American brothers/soldiers, huddled together in a bunker listening to Lithuanian music and radio shows about the Lithuanian partisans. (Talk about irony: much later I learned that during roughly the same period, my brother, who had remained in Lithuania when the rest of my family fled at the end of World War II, had been drafted and was serving in the Soviet Army.)

When it came time for me to return to the U.S., I decided to leave my radio behind for my buddies. My friends rejoiced, even though by then it was battered and scratched from being dragged through bunkers and muddy trenches. It had provided me with so many unforgettable moments — Lithuanian songs, partisan fights and other interesting programs— when I was a young soldier so far from home.

About 3,000 American soldiers returned with me across the Pacific to Seattle, where we were greeted by an army band. After a two-week vacation, I reported to Camp Crowder, Mo., and was appointed to serve in the military police. After that stint, I returned to my new home in Chicago. Today, I am an American citizen and an American war veteran, but in my heart — still and always a Lithuanian.

Previous Mysteries of the Night Sky: the Northern Lights in Lithuania
Next Lithuania: Image Breakers