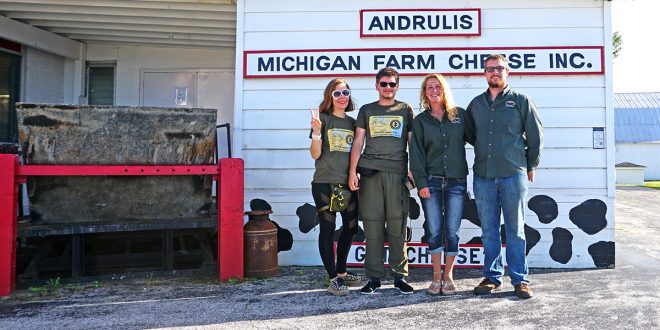 “Destination Lithuanian America,” the five-year-long heritage mapping project, is coming to a close. This January, project director Augustinas Žemaitis added his last 100 discovered heritage sites to the 750-site compendium. The map covers Lithuanian-American churches, cemeteries, clubs, monuments, museums, and locations otherwise falling under the rubric of “Lithuanian heritage.” It is accessible at http://map.truelithuania.com.

Žemaitis and his wife Aistė Žemaitienė visited each establishment, carefully documenting its history and making a photographic record. Much of this information is available on the related website http://global.truelithuania.com and “True Lithuania” on Youtube and Facebook.

Here are a few of the areas featured – they show the range of sites included in the updated version of the heritage map.

Eastern Pennsylvania, the so-called Coal Region, boasts of 105 Lithuanian sites, which Žemaitis highlighted on the heritage map. The state was the point of entry where early Lithuanian immigrants first settled in significant numbers. They began arriving in the 1860s, and by the turn of the century, they numbered over 100,000. There are more than 40 Lithuanian churches in this area alone, many of which also had their own cemeteries. There were also nondenominational Lithuanian cemeteries in the area. The Lithuanian “capital” Shenandoah alone had six Lithuanian cemeteries. To this day 12% of the Shenandoah population claim Lithuanian ancestry. While Schuylkill County, which encompasses Shenandoah, is 5%, making it the most Lithuanian county in the US. All of the region’s Lithuanian churches (including the closed and demolished ones) and cemeteries are marked on the “Destination Lithuanian America” map while their stories and images are available on global.truelithuania.com. Other sites, including Lithuanian clubs (six of them are still operating) and parish school buildings, have been researched and mapped as well. Shenandoah, once known as the “Vilnius of America,” is important in the cultural history of Lithuania: it was here, and not Lithuania, where the world’s first Lithuanian-language novel was published in 1904. At that time, the Tsar had banned all Lithuanian language publications printed in the Latin alphabet.

Although the Pennsylvania Coal Region was the most Lithuanian area of the east coast, similar sites with  Lithuanian churches, cemeteries and parish schools dot New England and the Mid-Atlantic. Significant sites are also located in Pittsburgh, New York City, Boston, and Connecticut. Each of these has been thoroughly researched and mapped. Future generations of Lithuanian Americans will be able to locate the settlements where their forefathers once lived in these so-called “Lithuanian colonies.”

The map includes a listing of buildings and monuments designed in the contemporary Lithuanian style developed by Lithuanian American architects in the 1950s-60s. These architects, who fled the Soviet occupation, incorporated Lithuanian folk elements in buildings, churches, and monuments in the US. It was their way of enshrining “pieces of Lithuania” in their work. The fusion of ethnic traditions and modern architecture was unique and resulted in recognition on a national level. Indeed, this style is an integral part of Lithuanian architectural history and a testament to the U.S. for its acceptance of immigrants, thus enabling them to continue developing their unique architectural style.

This Modern Lithuanian style, as featured in “Des­tination Lithuanian America,” is evident in Chi­cago’s Nativity BVM Church, the Jesuit Lithuanian Youth Center, the Lithu­anian churches in East St. Louis, Illinois and Queens, New York, and in a massive memorial for those who died for Lithuania’s freedom at the Franciscan Monastery in Kennebunk­port, Maine.

The “Destination Lithu­anian America” map includes 44 gravesites of prominent Lithuanian historical figures. Many of them fled the Soviet occupation at the close of World War II. As Soviets generally targeted the country’s leadership, the “cream of society” – artists, architects, academicians and well-trained professionals – emigrated. The map marks the gravesites of General Povilas Plechavičius, who successfully frustrated Nazi plans to create a Lithuanian SS legion, and author Antanas Škėma, whose existentialist semi-autobiographical White Shroud is considered by many scholars the most important Lithuanian literary work of that period. Others mapped include the “Father of Lithuanian basketball” Pranas Lubinas / Frank Lubin, poet Henrikas Radauskas, world boxing champion Jack Sharkey (Juozapas Žukauskas), tennis player Vitas Gerulaitis, Hollywood star Charles Bronson (Karolis Bučinskis), and archbishop Paul Marcinkus who served as the Mayor of the Vatican City and thwarted an assassination attempt on Pope Paul VI. Also included is the grave of an American, First Lieutenant Samuel Harris, who was killed in action on February 24, 1920, in Kaunas as he served in the American Brigade in Lithuania. He was buried in Arlington, Virginia. Lithuanians built a memorial for him with the Lithuanian mounted knight, the Vytis, in bas-relief.

LITHUANIAN MONUMENTS IN THE USA

HERITAGE SITES IN CHICAGOLAND: SOME 111

It took the Žemaitises several weeks to visit, photograph and research every Chicago site.

SOME HALLS PREDATE THE REPUBLIC OF LITHUANIA ITSELF

Several Lithuanian nondenominational community halls that are still functioning are recorded on the map: Philadelphia’s Lithuanian Music Hall (1908), Grand Rapid’s (Michigan) Vytautas Aid Society (1910), and Baltimore’s Lithuanian Hall (1920), to name a few. Others have closed but are charted on the map because they still bear Lithuanian inscriptions on their facades.

“Destination Lithuanian America” includes 54 localities named after Lithuania or Lithuanians, including entire districts of Lithuanian streets in Lawrence, Massachusetts and Nashua, New Hampshire, as well as the Lithuanian-named lakes “Dainava” and “Kasulaitis” in Quebec and Pennsylvania, respectively.

Lithuanian monasteries and convents are treasure troves of Lithuanian art in America. Not only is the Lithuanian sensibility apparent in their architectural details, but they are also repositories of paintings, sculptures, and high-quality crafted items. Some serve as summer resorts, like the Franciscan Monastery in Kennebunk, Maine. Speaking of summer activities, Lithuanian children’s camps are scattered across the North American continent, their locations mirroring Lithuanian settlement patterns. They range from “Rambynas” near Los Angeles to “Dainava,” “Pilėnai,” and “Rakas” in Michigan to “Neringa” in Vermont, and “Romuva” and “Kretinga” in Ontario, Canada. All of these impressive Lithuanian American landholdings are plotted on the online map.

“Destination Lithuanian America” map also includes 11 Lithuanian museums in the USA, each of them a great introduction to Lithuanian ethnic traditions, crafts, and history.

It also includes unique historic sites, such as the Lithuanian Cultural Garden of Cleveland, created before World War II and featuring sculptures of Lithuanian heroes, or the Lithuanian Room at Pittsburgh University, a unique installation gifted by then still independent Lithuania. In Washington, DC, we have Our Lady of Šiluva chapel in the National Shrine of the Immaculate Conception.

“Destination Lithuanian America” also includes sites dealing with minority communities that hail historically from Lithuania. Among them are the Litvaks (Jews with roots in the territory of the former Grand Duchy of Lithuania) and Lithuania’s Polish and Tartar communities.

In the “Destination Lithuanian America” map, the Lithuanian heritage sites are grouped according to categories, like church, monument, or cemetery. They are also ranked by importance. Augustinas Žemaitis said that, unfortunately, some of the mapped sites get “downgraded” over time. For example, the Du Bois, Pennslyvania, Lithuanian church was closed and sold after being included in the map in 2017, and a New York City plaque honoring the founder of the city’s first Latin language school – a Lithuanian named Kuršius – has been removed. (An effort is underway in New York to restore this plaque.)

On the other hand, some sites have actually been upgraded since their original listing and mainly due to the attention brought by the Mission Lithuanian America team. “It is great that our expeditions played a part,” said Žemaitis. “In West Frankfort, for example, local Lithuanians said that our attention inspired them to erect a Lithuanian flag in the West Frankfort Lithuanian cemetery and put up a new sign.” Or the case of the Ledford Illinois cemetery. After his 2018 expedition to this southern Illinois site, Žemaitis described it as America’s most neglected Lithuanian cemetery. “It was a forest – completely overgrown by trees. After we publicized this, Vilius Žalpys from Oregon launched a project to clean it up.” When the Žemaitises returned to the cemetery in 2021, they found it transformed and adjusted their map and website accordingly. Also, after the 2018 trip to Illinois, the East St. Louis Lithuanian church had its tower rebuilt, and numerous new Lithuanian monuments have sprung up, their dedications ranging from the legendary Lithuanian freedom fighter Adolfas Ramanauskas-Vanagas to Lithuanian football great Dick Butkus.

FURTHER EXPANSION OF THE MAP

While the “Destination Lithuanian America” map now undoubtedly covers most known Lithuanian-American sites, Žemaitis believes some “elusive” areas have yet to be discovered. He asks that readers review the map and contact him if any Lithuanian point of interest has been omitted. Augustinas Žemaitis can be reached by email at augustinas.zemaitis@gmail.com.

Augustinas and Aistė Žemaitis have helped Lithuanian Americans notice and appreciate their immigrant history. Their map and website have also preserved Lithuanian heritage sites, at least online. It is Žemaitis’s wish that Lithuanian Americans safeguard their tangible heritage. “I hope the map will spread the word, as some of these sites are far too little known in Lithuania or the Lithuanian diaspora.”

The article was published in “Draugas NEWS”, January 2022 edition.

Previous A Life of Devotion: Brother Vincent Žvingilas
Next The Parallels of Dita