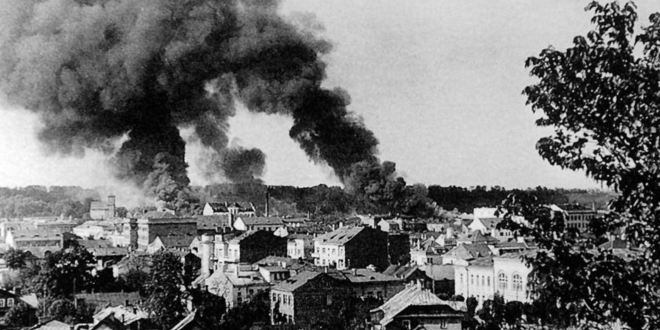 Kaunas is burning, June 1941. Photo from a newspaper clipping.

The Parallels of Dita

This memoir opens with a stroll along Freedom Avenue in Kaunas during the author’s childhood, around 1938, and a return to the bustling city center in recent times, around 2000. Turning on Daukantas Street, Dita and her mother pass Swans Pharmacy and come to the garden of the War Museum with its gnome fountain spurting water onto frolicking gold fish. The grumpy gnome survives the clearing of the grounds of crosses, memorials, altar, and Statue of Freedom and eventually witnesses the restoration of monuments. But the fountain is now littered and filled with dull coins instead of gold fish.

About midway in the memoir, Chapter 15, “All Souls’ Miracle,” features a celebration of All Souls’ Day, November 2, at the Kaunas Cemetery between Trakai Street and Vytautas Prospect, at the very beginning of the second Soviet occupation: a sea of candles, with lights on marked and unmarked graves, and a multitude of Kaunas residents coming together to honor the dead and be among their own. Agents of the Soviet secret police and Communist Youth organization lurk amid the crowd, but they are not yet very fearsome. After visiting their loved ones’ graves, Dita and her mother return to their apartment on Vytautas Hill and view the cemetery from a distance:

Below our feet lies a rectangular sea of fire. It’s made up of thousands of burning eye-like particles. Each one twinkles to its own rhythm, but all together, their sparkling outshines all the lights of Kaunas. The dreary and dark autumn sky glows an unearthly, indescribable rose… (p. 121).

In subsequent years the Kaunas cemetery and the Tomb of the Unknown Soldier at its center are totally devastated, with only bare ground and solitary trees remaining between the two Orthodox churches at one end and a Mosque at the other.

These are a few of Dita’s parallels between then and now: altered sights on Freedom Avenue, the garden of the War Museum, and the Kaunas Cemetery. Each location alludes to a value, concept, or religious belief—freedom, fortune, the eternal light of souls—that might have strengthened people during World War II and the Soviet occupation lasting until 1990. There are numerous other parallels, some incidental to the personal profiles or events featured in a chapter, others serving as narrative strategies, such as a pretext or metaphor for the main topic. For example, in Chapter 24, “The Masked Ball,” the experience of attending a masquerade in high school is juxtaposed with the practice of assuming masks, or pretending, at the Pedagogical Institute in Vilnius and the public sphere in general, due to the falsehood and deception rampant under the ruling Soviet order.

Pukienė’s autobiographical memoir emphasizes survival of World War II and its aftermath, her own and that of others throughout that time period. It is basically a family memoir, branching into the lives of friends, neighbors, servants, and cultural figures, all of whom are inevitably affected by political-historical events and socio-economic changes. We are introduced to the author’s maternal grandparents, Ona and Jonas Žolynas, whose farm in Suvalkija (southwestern Lithuania) was the locus of wonderful summers during her childhood; mother Milda, an elegant, artistic, religious woman, who provided for Dita’s fine upbringing in Kaunas; upright, intelligent father, Samuelis Sabockis, who endowed her with a respect for books; and caring, cultured stepfather, Tadas Lomsargis, who saved her from Nazi persecution. We find fun and adventure with beautiful Aunt Prakseda, whose own later life story offers material for a feature film. And more good times with Uncle Kostas and his lovely wife, Ona (Hanė) Smilgevičiūtė, who are very helpful during the war years and eventually offer connection with relatives abroad. Great Aunt Julija is unforgettable for her hospitality, as well as her strength and endurance in the event of misfortune: her children’s deportation to Siberia. Other family members and friends are likewise vivid, as a result of the author’s remarkable memory for detail and ability to reconstruct scenes from the past as if they were experienced in the present.

Special mention must be made of Dita’s father, Samuelis Subockis, to whom the memoir is dedicated. His portrait is featured in Ch. 11, “Eternal Light,” and Ch. 12, “The Star of David,” which abound in loving memories and precious moments with Papa: listening to his stories and songs, enjoying books and movies together, sight-seeing in Kaunas, and excursions to Marijampolė, near her grandparents’ farm.

When father is absent, Dita receives his thoughts and love expressed in letters—until father disappears and the letters cease to arrive. Eight-year-old Dita is told that her father had to leave for Brazil, because she is shielded from information about Nazi terrors. In fact, Samuelis is shot, under circumstances that are revealed to Dita only after the war, about six or seven years later.

The mysterious disappearance and the fact are somehow interwoven in these chapters, with exquisite subtlety. The tragedy is foreshadowed by images of the goddess of death with her scythe and perhaps mitigated by references to fate and fortune. The good memories persist. “In that fatal spot [where he was shot] sprouts a tree of tolerance…” (p. 88).

The author’s losses come early. They are balanced by good fortune in adulthood: a flourishing family life with husband Paulius Pukys and their children, Paulina Eglė and Martynas Žilvinas; a viable career in journalism and radio that eventually offers contact with Western culture. Though often previewed, career and family are covered mainly in the closing chapters of the book. For instance, Chapter 28, “A Jericho Rose,” evokes a loving relationship with Paulius as he presents her with the extraordinary rose and then proceeds to aspects of her work for the satirical magazine Šluota (Broom) during the soviet era. But it is not so much her work as a profile of the competent editor Juozas Bulota and the difficulties he and staff had in satisfying Glavlit, the censorship agency, or the Main Administration for the Protection of State Secrets in the Press and other institutions.

An educated journalist and prolific translator, Silvija Lomsargytė-Pukienė has sufficient experience in language and communications to present her memoir in a fluent, engaging writing style. She has the courage to speak her mind, to be inventive with narrative structure (particularly the treatment of time), and to digress along the folds of memory, offering bursts of color in a dialogue or anecdote. Appreciative of literature, especially poetry, Pukienė embellishes numerous chapters with poetic verses, including those of Lithuanian émigré poets. She closes chapters with relevant passages from the Bible, which she first encountered in the hands of her devout grandfather (Tėtulis) Jonas Žolynas and read with interest as a teenager.

This memoir is also remarkable for its honesty and openness, the expression of feelings and their nuances, of inner thoughts and reflections. These qualities are exemplified by the account of her first love in Ch. 23, “The Fence that is Long Gone,” as well as her relationships with family members. While it is becoming more noticeable in the literature of recent decades, such openness is rare among Lithuanians, who tend to be self-contained and controlled and to veil their private lives with secrecy.

Since the restoration of Lithuania’s independence in 1990, we have had numerous memoirs about exile in Siberia, accounts of partisans (freedom fighters or forest brothers) resistance to Soviet oppression, and memoirs of life in interwar Lithuania,  1918-1939. Among English translations one might note Children of Siberia, Memoirs of Lithuanian Exiles, comp. by Irena K. Aras and Vidmantas Zavadskis (Kaunas: The New Sheet, 2013), The Diary of a Partisan: A Year in the Life of the Postwar Lithuanian Resistance Fighter Dzūkas by Lionginas Baliukevičius (Vilnius: Genocide & Research Center, 2008), and Springtime in Lithuania, Youthful Memories 1920-1940 by Hypatia Yčas (Chicago: Adams Press, 2000).

Pukienė’s The Parallels of Dita is among very few works that span almost the entire 20 century, from the interwar years, albeit the 1930’s, to newly independent Lithuania. (Another far-reaching work is Lithuania, Grandmother Uršulė and I by Irena Kurtinaitytė-Aras, recently published in English, Kaunas: The New Sheet, 2022.) Pukienė conveys the cultural milieu, social life, and ambience of city or countryside in each time period by their influence on her own life  and those of others,  all the more immediately and succinctly.

Her parallels between then and now underscore changes wrought by time and ruling orders during this complex century. However, the continuity of life prevails as the memoir closes with a loving portrait of her father-in-law, grandfather Jokūbas Pukys, whose life spanned almost the entire century, and the cheering presence of grandchildren. Images of the Baltic Sea, trees, and winds suggest continuity while the sky and stars bear intimations of eternity.

The translation from Lithuanian to English by Al Zolynas, poet and English Professor Emeritus, also Silvija Pukienė’s cousin, is excellent in that the memoir reads like an original text: it is clear, flowing, and idiomatic. Given the intricate grammar and syntax of Lithuanian, along with numerous poetic verses quoted in the text, this is an admirable achievement. Moreover, Zolynas has supplied footnotes to explain terms and names that might be unfamiliar to readers of the English version, and a brief guide to pronouncing Lithuanian words at the end of the book.

The article was published in “Draugas NEWS”, February 2022 edition.