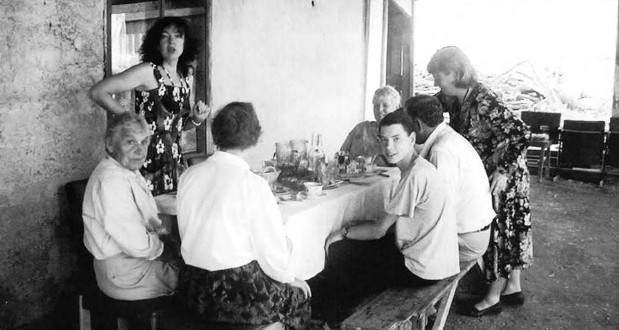 A lengthy, exhaustive, and meticulous search for Lithuanian roots on two continents culminates in a joyful meeting with long-lost relatives.

It seems impossible that just last August I was sitting at a table filled with savory Lithuanian food and surrounded by Leita cousins! I never imagined that my quest to connect with my Lithuanian relatives would actually happen; there were months between clues, weeks waiting for letters from Lietuva, and years to put all the pieces together. I never in my wildest dreams realized how much joy I would have if I did find them.

I BEGAN MY SEARCH TWELVE YEARS AGO IN WEST – ville, Illinois, where my grandfather Mike Leita was a coal miner from 1914—1929, when he died from Black Lung Disease. The Vermillion County Courthouse burned, leaving no records of my grandparents’ marriage, their children’s births or deaths. The State of Illinois does have some of the death records. I was thrilled to find the names of my grandfather’s parents and my grandmother Lucy Misunas’ father. But I was terribly disappointed that no Lithuanian place names were given in the records.

Another hurdle, one common to those doing Lithuanian research, is the variety of surname spellings. I naively expected to find my surname Laitas in the records. To my surprise, I found Leati, Latar, Lates,’ Leata, Lada, Laikis, and Leita, which is the correct one. I learned that I had to say the word and listen to the sound rather than rely on the spelling. There are six family members buried in the Lithuanian National Cemetery in Westville, and only two of the grave markers have the same spelling!

I found that Holy Cross Catholic Church (Lithuanian) in Westville had closed. I searched diocesan repositories from Westville to Chicago and no one seemed to know where the records went. The Urbas Funeral Hom e in Westville yielded little new information, but were very helpful. My luck finally changed as I searched Vermillion County probate records! My grandmother Ludovia (the first time she was not listed as Lucy or Lucille) Leita sold her little home to settle with her husband Mike on their estate in 1934. Four sons were named and ages were provided. This proved to be the original Lithuanian spelling of the surname.

My luck changed dramatically with the advent of the computer.

While “playing” on the Internet, I came across a site listing coroners inquests for the State of Illinois (http://www2.sos.state.il.us/cgi-bin/). My dad’s baby brother, John, who died at nine months of age was on the list; he had no funeral records or grave marker, so this was a great find.

I joined a Lithuanian genealogy mail list and quickly learned how much I had yet to learn. The Leita surname seemed to be an unusual name so I decided to try the Lithuanian white pages on the Internet (http://www. lintel.lt/lintel/default.htm). Twenty eight families with the surname popped up; I was so excited to finally be making some progress! I had a letter with our basic family information translated and sent it to each name along with a self-addressed envelope and an international postage coupon. International coupons can be purchased at the post office for $1.20 and are a real help for many Lithuanian families.

When I disclosed information in the letter to my possible relatives, I held back some facts that I knew. I hoped to find true relatives who could fill in some of the matching information.

Return letters soon began to arrive. I kept all letters even though they did not seem to be related. Soon the pieces began to fall into place. Judita Leitaite’s letter arrived from Vilnius with tantalizing references to some family names. Andrius Leita, another cousin from Ukmerge, was age 91. His daughter, Vlada, confirmed family information and added new facts. My father had a new first cousin! Andrius5 father, Petras, left the small village of Varguliai (10 km. northeast of Ukmerge), Anykšciai region, with my grandfather Mike and another brother, Jonas, and headed for America. Petras quickly returned to Lithuania; he died shortly after.

Judita Leitaite told me she is a singer and that she would be in America soon. In the spring of 1999, Judita, a well-known Vilnius soprano, delighted audiences in Chicago and at the Lithuanian W orld Center in suburban Lemont. She told us she would be singing during Mass at the Center’s Blessed Jurgis Matulaitis Church. She was up front, the featured soloist. Our eyes met and neither of us could stop smiling, we were so overjoyed! Even more exciting, Judita had researched her family at the Lithuanian Archives and found that our greatgrandfathers were brothers from the Varguliai/Anykšciai region.

After exchanging many wonderful letters with cousins in several cities, we decided it was time to visit my grandparents’ homeland. As we planned our trip, I also hired Alius Pleskaciauskas, a Lithuanian professional genealogist, to search the Lithuanian National Archives in Vilnius. I found his name on the Lithuanian Genealogy mail list (www.lithuaniangenealogy.org). Hiring a researcher was far superior to sending money to the Archives and waiting more than a year only to receive mediocre translations of the old Russian documents. Alius was able to find two more generations of Leitas and many of their children.

Based on this research, I have compiled an almost complete family tree. There is still information missing, both in America and Lithuania. I continue to search in both locations.

My challenge now is to find ancestors for my grandmother, Lucy Misiunas. I did locate her sister, Ežbieta in Chicago, thanks to cchow-to-information” from Arleen Gould of the Lithuanian Global Genealogy Society. I had to look at each baptismal record until I found the mother listed as Elisabetha Misunaite. This led to a marriage record under the name of Alzbieta M icunuca and John Szileikis and a death record for Elžbieta. But no place name in Lithuania.

Another sister of Lucy, with no known first name or married name lived in Grand Rapids, Michigan. A brother, Charles Misiunas worked at Jefferson Barracks in St. Louis and never married. I have no other records for him; I still have a lot of looking to do. Sadly, there are 360 Misiunas families in the Lithuanian phone book so that search will be a slow one. I press on, recently sending the first flight of twenty letters to Misiunas families, asking for information.

Now, back to our trip to Lietuva. After we arrived in Vilnius, Judita, as our host, drove us to the Balninkai Church (24 km. northeast of Ukmerge), where all of our family were members as far back as the mid-1700s. I had goose bumps as we visited the small Varguliai Cemetery filled with Leita family grave markers. Words cannot express the feeling of being connected, of being home!

We walked the green hills of Varguliai, where my grandfather once played; the home is now gone. We soon arrived at Judita’s family farm. Can you imagine 1000 ares of grass, with a few cows tied out to graze (they are milked by hand out in the field), several pairs of storks looking for food, and a lovely small pond. Their old home was a pile of bricks; there was no way to care for it during the Russian occupation times. Genute, age 73, and her sister Brone, 71, now share their home with Genute’s son Stepas and his wife Giedre. They live in one-half of the structure and their livestock live in the other half. They hope their dream of rebuilding their home will become a reality in several years. All work is done by hand until they can afford a tractor and more modern equipment. They do have electricity, but water comes from a well and bucket.

We shared a meal, enjoying more courses of wonderful traditional food than I believed possible. After many toasts to our family and our future, I noticed that my cognac glass was always full. We were the first Americans they had ever met and we were treated like royalty! After many hugs and promises to return, it was time to go. I think about them so often. By American standards they have so little but what they do have is far more vital than material possessions. They have wonderfully warm hearts and hope for the future!

Previous Hot Soups
Next Beautiful Lithuania: Samogitians: a Breed of Their Own?