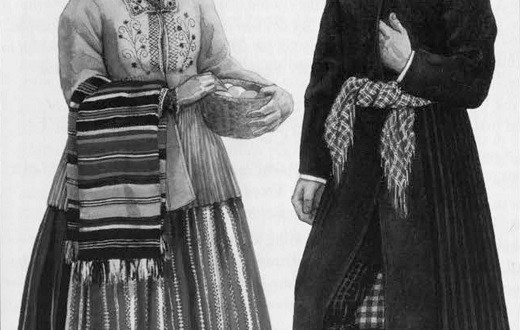 Beautiful Lithuania: Samogitians: a Breed of Their Own?

In western Lithuania there is a group of people who speak a different dialect and sometimes claim a different nationality. Still, they remain a part of Lithuania. Rokas M. Tračevskis reports on how the Samogitians became a “sub-nation” of Lithuania.

WE ARE AN INTERNATIONAL FAMILY, SAID Vilma laughing, her words carrying a hint of the Samogitian dialect. Vilma is an employee of the architectural heritage protection department who lives with her husband Arturas, a historian, in Vilnius.—

“I don’t understand what my wife says to her relatives when we go to her native Telšiai,” said Arturas. “When they want to speak with me, they switch to normal Lithuanian.”

Arturas, who traces his roots to the eastern Lithuanian town of Švencionys, points out the difficulties of understand the Samogitian dialect.

“Samogitians put the emphasis at the beginning of the words and cut the endings, like some Latvians do. Endings like cas’ or cis’ are transformed into just £s’. And if that is not enough, Samogitians also invented plenty of their own words that are different from Lithuanian,” said Arturas.

Telšiai is the unofficial capital of Samogitia. Locals and Lithuanians refer to Samogitia as Žemaitija and its inhabitants as Žemaiciai, but most English literature uses the name Samogitia, which is the Latin variation of the name.

While there may be different terms, there is only one location. Samogitia is situated in western Lithuania. It covers some 21,000 square kilometers of Lithuania’s total of 65,300. Many Lithuanians meet Samogitians during the massive exodus to the sea-resort of Palanga during the summer months.

“Speaking about the four ethnic regions of Lithuania (some say there are five regions, including Mažoji Lietuva or Lithuania M inor – Ed.) — Aukštaitija, Dzukija, Suvalkija and Samogitia — we can say that only in the latter the process of forming an independent nation related to Lithuania — the Samogitian csub-nation’ — was visible,” said historian Alvydas Nikžentaitis who went on to explain what a sub-nation is. “It is an ethnic group that has failed to grow into an independent nation but retained some features distinguishing it from the parent nation.”

But the Samogitians never had their own state. “At the beginning of the 15th century, the Lithuanian Grand Duchy had territory equal to the current United States. It reached the Black Sea in the South and the outskirts of Moscow in the East,” said Vilma. “It is ironic that at the same time Lithuanians had difficulty keeping tiny Samogitia.”

“It was sold a couple of times to German crusaders who ruled Estonia, Latvia and Prussia. Samogitia was an obstacle to uniting these German territories. However, the Germans failed to conquer the Samogitians who preferred to be part of Lithuania and finally joined it in 1410,” said Vilma.

Vilma speculates that Latvia could also have become a Samogitian-type sub-nation of Lithuania if German crusaders had not occupied it starting in the 13th century.

“Lithuanians were the only Balts who managed to create their own state in the M iddle Ages. So, most Baltic tribes joined the Lithuania nation. Only the Germans didn’t allow our brother Latvians to join,” said Vilma. A couple of years ago the Samogitian Cultural Society started issuing “passports of Samogitia.”

“I had no time to get this passport. So, I’m not a citizen of Samogitia,” said Vilma laughing. She considers the passports a “joke” issued to raise the self-esteem of Samogitians, something Vilma doesn’t think they lack. “O ur cultural society works in Vilnius as well as in other places throughout Lithuania,” she explained. 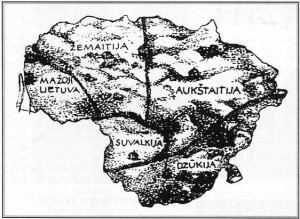 Vilma does not think Lithuanians need to fear possible Samogitian separatism. For now no one is seeking independence from anyone. Vilma pointed out that it is not clear who would seek independence from whom — Samogitians from Lithuania, or vice versa. Up until the end of the 19th century a clear distinction was made between Samogitians and Lithuanians, but it has become fuzzy with time. Today, besides a few unique characteristics, Samogitians are a part of the Lithuanian nation.

“Inhabitants of the four Lithuanian ethnic regions have different characteristics,” said Vilma who went on to list some of the more common stereotypes associated with the people in each region.

She also said that Samogitians support right-wing parties more than people in the rest of Lithuania: Samogitia and the city of Kaunas were a stronghold for Valdas Adamkus in the last presidential elections.

While they are not separate, Samogitians maintain their unique identity with radio and TV programs in their own dialect. They also publish their own calendars, magazines and newspapers. A textbook on Samogitian history for schools in western Lithuania has also been issued and in 1994 the Lithuanian Heraldry Commission approved a coat of arms and flag for the region. O n both, the historic symbol of Samogitia, a bear standing on its hind legs, appears.

Samogitians also have contributed and continue to contribute to the Lithuanian nation.

“I can mention hundreds of Samogitians who contributed, and are contributing, to the glory of the Lithuanian nation. For example, mountaineer Vladas Vitkauskas, who has taken the Lithuanian tricolor to the tops of the highest mountains of all continents of the world. Another Samogitian, Eimuntas Nekrošius, was recognized as the best European theater director by European critics. And Samogitians are famous for their slightly crazy imagination. For example, Nekrošius invited Andrius Mamontovas, a Lithuanian rock star with punk hair, to play Shakespeare’s Hamlet,” said Vilma.

Direct evidence of this contribution can also be seen on Lithuanian bank notes: half of the portraits on the notes are of Samogitians. Žemaite, a pioneer of realism in Lithuanian literature in the beginning of the 20th century, can be seen on the 1-litas note. Motiejus Valancius, a bishop and writer of the 19th century, appears on the 2-litas note; and Steponas Darius and Stasys Girenas, the first Lithuanian pilots to make a transatlantic flight, in 1933, are on the 10-litas note.

A Samogitian also appears on the 100-litas note in the face of Simonas Daukantas, a historian of the 19th century. Vilma and Arturas named their son Simonas after him. “The historian, not the 100-litas note, of course,” explained Vilma.

On Jan. 8, the Samogitian Culture Fund announced a plan to establish a “House of Simonas Daukantas” in Vilnius. It will be the center of Samogitian culture in the Lithuanian capital where, according to the student organization “Samogitia,” poor but talented students from the region will be able to stay while studying in Vilnius. The house will also be a cultural home away from home for other Samogitians. It seems that every Samogitian will be able to find žemaiciu blynai, a Samogitian potato pancake filled with meat, in Vilnius.

Previous Our Lithuanian Roots: Lost & Found
Next For your Easter table