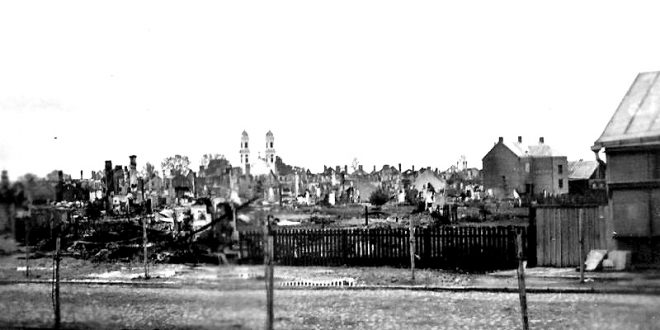 There is no universally agreed-on definition of a shtetel. According to professor of Jewish history, Yohannan Petrovsky-Shtern, what became known in Yiddish as the shtetel grew out of the “Polish private town,” the property of Polish magnates during the time of the Polish-Lithuanian Commonwealth, continuing as such and under Russian Imperial administration after the partitions in the late 18th century, lasting until virtually all their Jewish inhabitants were killed in the Holocaust. They varied from the sort of dilapidated village portrayed in “Fiddler on the Roof” to towns of several thousand, such as Jonava, Lithuania, the shtetl of Shtetl Love Song. All shtetels were inhabited by a majority or near majority of Jews, who were granted monopolies by the Polish owners of the land on which the shtetls were built, making them the primary shopkeepers, tavern keepers, barbers, shoemakers, tailors, bakers, and other small businessmen and craftsmen. Local nationals, including administrators and functionaries, such as postmen and police officers, also lived in and around the shtetls. Each shtetl usually had a Christian church, as well as Jewish prayer houses and a synagogue, and both Christian and Jewish cemeteries.

Shtetl Love Song is the story of an extended Jewish family and their neighbors in the first half of the 20th century in Jonava, a large shtetl near Kaunas. It’s a memoir to the extent that it’s a true story, but nearly half the book passes before the author is born. There is much more detail than he could possibly have known about, both before and after he’s born, so it’s a lot like a novel, except that the characters are all real people, the author’s parents and grandparents, the author himself (his name in Yiddish is Hirshe), and the people they know and interact with, mostly Jews, but also a few friendly ethnic Lithuanians.

The book begins as Lithuania is strengthening its tenuous hold on independence in the 1920s and continues through the 1930s and the Smetona regime. History is always present in the background – echoes of the coup in 1926, the infestation of the Nazis in 1930’s Germany, the Russian occupation of 1940, the deportations to Siberia, which victimized Jews as well as Lithuanians – and the coming Holocaust lurking like a shadow over the nostalgic narrative of vibrant Jewish life in Lithuania.

This book is translated from the Russian, but the sentences often have the lilt of Yiddish and the wonderful, colorful similes associated with Yiddish speech.

“Rokha is like a donkey harnessed to an overloaded cart that somebody has forgotten to unhitch.”

“Then, like warm smoke lifting from a chimney on a cold winter morning, the quiet voice of her daughter-in-law broke the silence.”

Kanovich’s prose is often lyrical, both in describing the warmth of his childhood in the heart of his family, but also in the great sadness in his account of the last days of Jewish life in Lithuania.

The main characters are Rokha, Hirsche’s grandmother, known for her decisiveness and sharp tongue as “the Samurai,” Hirche’s beloved, hard-working mother, Hennie, and his father Schleime, a master tailor who served as a cavalryman in the Lithuanian army, an atheist, like the stereotypical Litvak – and there are dozens of others, including Hirshe’s uncle Aaron and more significantly, his wife Esther, for whom Hennie works taking care of their little son, Raphael, but more a friend and confidant than an employer; Hennie’s benefactor, the storekeeper, Reb Yeshua Kemnitzer; Gedraitis, the Lithuanian policeman, who speaks Yiddish and enjoys matza with his Jewish friends on Passover, known as “Almost a Jew”; Julius, a Lithuanian apprentice to Schleime, who is amazed to learn that Jesus, Mary, and Joseph were Jews; Shmulik, Hennie’s brother, another apprentice to Schleime, and a fervent communist, who is arrested and serves three years imprisonment for sedition, later an NKVD operative when the Russians take over; and too many more to mention.

There are lots of good books in English about the Holocaust in Lithuania, not so many about Jewish culture in prewar Independent Lithuania, and few, if any, as well-written and captivating as this one.

A Monument to the Lithuanian Jews

The works of Grigory Kanovich

Grigory Kanovich is one of the most prominent modern Lithuanian Jewish writers living today. He has written more than 10 novels – a virtual epic saga – dealing with the history of Eastern European Jewry from the 19th century to the present day. Kanovich was born into a traditional Jewish family in the Lithuanian town of Jonava in 1929. He has dedicated his life, in his own words, “to what has been lost, to what has been destroyed – the small Jewish town.”

According to Mikhail Krutikov, Professor of Slavic and Judaic Studies at the University of Michigan, “…Today, Kanovich is the only writer in the entire world capable of depicting the life of the pre-war Jewish shtetl with the documentary precision of an immediate witness and the deep emotional passion of a lover mourning his loss. He survived the Holocaust almost by a miracle, and made it his mission to serve, against all odds, as a custodian of the collective memory of generations of Litvaks, Lithuanian Jews.”

Kanovich has been awarded the Medal of the Order of the Lithuanian Grand Duke Gediminas and the Order for Merits to Lithuania. In 2014 he received the Lithuania’s National Prize for Culture and Arts. Also, in 2014, Kanovich’s novel Shtetl Love Song was awarded the Liudas Dovydėnas Prize by the Lithu­anian Writers’ Union. The prize was established by the acclaimed Lithuanian American photographer Jonas Dovydėnas, to honor his father, a prolific Lithuanian author and journalist.

Grigory Kanovich’s latest novel Devilspel, published by Noir Press in 2019, movingly describes the lives and fates of people affected by the massacre in Mishkine, Lithuania, in the summer of 1941, as the Germans arrive. It is also a philosophical inquiry into what makes people turn to evil or retain their humanity. Translated from Russian by Yisrael Elliot Cohen, it won the London-based EBRD Literature Prize for 2020. The 20,000 euro prize is split between the author and translator.

You can read more about Grigory Kanovich in the September/October 2020 issue of Lithuanian Heritage magazine.

Previous Viktoras Petravičius: Master of the Monoprint
Next Jewish and Lithuanian Cuisine. We eat the same things!