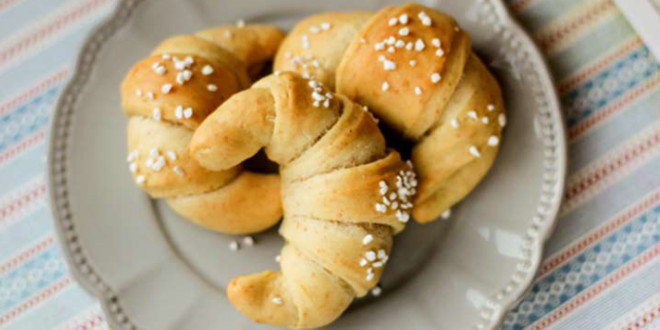 Studying History in the Kitchen

February 5, 2016 Food-Cooking, History-before-1900 Comments Off on Studying History in the Kitchen 3,606 Views

On January 26 the Austrian-Lithuanian community met in the heart of Vienna to celebrate the launch of a special publication: The eCookbook,  Tasting Historical Europe – Exploring the Culinary Threads between Austria and Lithuania.

One would think that “culinary threads” between Austria and Lithuanian would have the tensile strength of a cobweb, however, this fascinating little books proves otherwise. It succeeds in weaving a colorful tapestry of little explored historical culinary connections.

The 110-page cookbook was created through the efforts of the Austrian National Library and Vilnius University, Faculty of Communication, together with the Europeana Food and Drink Project (http://foodanddrinkeurope.eu).

The book, which is available for free download, is dedicated to the historical gastronomic relations between Austria and Lithuania. It is part cookbook and part history treatise, mixed with a soupcon of anthropological commentary. The book is trilingual; passages are published in English, German and Lithuanian.

Four foodbloggers from Lithuania and three from Austria contributed to this culinary exploration. The Lithuanians are identified only by their first names, however, all of them are well-known in the Lithuanian culinary community. Their blogs are published exclusively in the Lithuanian language, and this little cookbook is their first foray into the English language.

Lithuania is represented by a number recipes taken from historical cookbooks. The oldest Lithuanian cookbook known in the Grand Duchy of Lithuania is a manuscript written by the Radziwills’ (Radvilas) cook in the 17th century. The main part of the book consists of translated Austrian recipes thus spreading into Lithuanian kitchens and later creating mutual culinary links.

The cookbook contains a modernized version of the “Radziwill Zander.” The zander strongly resembles, both in looks and in taste, the American walleye. It is cooked with vegetables in a dutch oven on a fire surrounded by embers. A great recipe to try in the summer.

Austrians are known for drinking coffee and, apparently, Lithuanians also had a taste for it. The cookbook includes instructions how to roast coffee from The Lithuanian Housekeeper, published in Polish in 1848.

There are several modernized recipes taken from the 1854 cookbook by Wincentyna Zawadzka, called Lietuvos virėja (The Lithuanian Cook). It is the first comprehensive cookbook of Lithuanian cooking ever compiled. You can see the 1907 edition of the entire 500-plus page book online on the Lithuanian archive website, Epaveldas: http://www.epaveldas.lt/record Description /LNB/C1R0000032758. It is written in pre-standardized Lithuanian, so it should prove interesting for those who speak the language, but very frustrating for those who must rely on internet translation programs.

Tasting Historical Europe offers Zawadzka’s recipe for Lithuanian roast goose with apples and sauce. In the accompanying essay, the authors claim that traces of wild goose eating can be found in many settlements of prehistoric Lithuania, perhaps since the Bronze Age, and Lithuanians have been eating goose ever since.

There are many more interesting tidbits in this new cookbook and I encourage our readers to download it, read the short essays, and try some of the more ambitious offerings.

This recipe is from Tasting Historical Europe. Originally the recipe was published in Lietuvos virėja (The Lithuanian Cook) by Wincentyna Zawadzka, Vilnius, 1907. The recipe was modernized by Rūta in her cooking blog: “Lietuvos virėja: eksperimentai pagal Zawadzką”
(http://lietuvos-vireja.blogspot.com).

Do not expect flaky French-type croissants. These are simple yeast dough pastries. With a little experimentation, a good cook will be able to come up with a very pleasant desert to be served with a steaming cup of coffee and say with pride: this is how a Lithuanian makes a Viennese croissant. 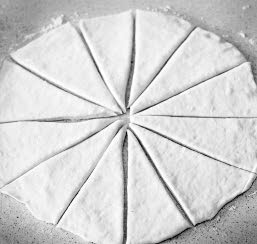 Beat melted butter until it pales in color, sprinkle with a few drops of water, mix in beaten eggs, warm milk, yeast, salt. Gradually mix in flour. Form spongy dough and leave it to rise.

Roll out dough into a 1/4 inch high circle, cut it into wedges, add jam, poppy or almond paste, roll it up and shape it into a crescent. Put crescent onto a buttered baking sheet, glaze with egg wash or melted butter and bake them in slow oven.

1. Based on the agricultural tradition of temperate climate zone.

2. Multicultural and tolerant cuisine, which embraced most of european and Middle east regional traditions.

Previous Gliders on the Dunes: Gregorius Radvenis − Pilot and Instructor
Next A Landsbergis Sonata on Independence