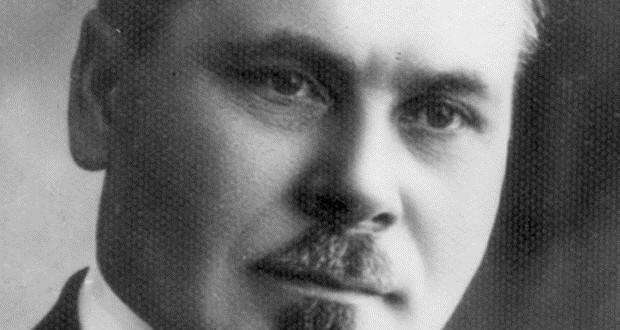 IN 1902 THE COAL MINERS IN THE ANTHRACITE region of Pennsylvania, which at that time had the most dangerous mines in the world, went on strike. It was one of the largest strikes the region ever experienced and Lithuanians played a prominent role in it. Jonas Šliūpas, a Lithuanian immigrant, was widely considered to be their leader (which he denied). According to one newspaper correspondent, “talk ten minutes with a mine operator fearful of an attack by Lithuanian strikers… and the name of Dr. Šliūpas will be mentioned. A sheriff or deputy will do the same thing, while a little Lithuanian priest will shake his head and sigh sadly while he speaks – all of them bearing testimony to the fact that this quiet, low-voiced doctor and student has a power almost supreme over a majority of the 45,000 of his fellow-countrymen in the half-dozen counties where they are strong in numbers.” Jonas Šliūpas, who spent thirtyfive years in the United States, was one of the most influential and controversial leaders of the Lithuanian national movement in the late nineteenth and early twentieth centuries. To mark the 150th anniversary of his birth flowers were placed at his monument on the grounds of the Memorial Homestead of Dr. Jonas Šliūpas in Palanga, Lithuania on March 6. Šiauliai University, which is home to the Archive of Dr. Jonas Šliūpas, has recently published a book, Dr. Jono Šliūpo 2011 metų kalendorius (The 2011 Calendar of Dr. Jonas Šliūpas), and hosted a conference about Šliūpas, “From Rebirth to Statehood: Socio-Cultural Perspectives,” from March 17-18.

Jonas Šliūpas was born on February 23 (old style, equals our March 6), 1861, in the village of Rakandžiai, Šiauliai county, two days after his parents were freed from serfdom. At that time most of what is now Lithuania was part of the Russian empire and the participation of Lithuanians in an uprising in 1863- 64 resulted in harsh political repression, including a ban on Lithuanian publications in the Latin alphabet. Political repression caused deep resentment among Lithuanians and stimulated growing national consciousness. Šliūpas was no exception. He studied philology and law at the University of Moscow (1880-82) and natural sciences at the University of St. Petersburg (1882), but, after participating in an anti-government student demonstration, he was confined to the Krestu prison for three months. When he became ill, he was sent to his parents’ home for a year and was banned from entering any Russian university. In 1883 he left for Switzerland and enrolled in the University of Geneva. When expected financial support failed to materialize, he accepted an offer to become the editor of Auszra (Dawn), the first patriotic Lithuanian newspaper, which was published in Tilsit (Tilžė, now Sovetsk), East Prussia and smuggled across the border into Lithuania. The German police, however, thought that he was promoting PanSlavism and soon ordered him to leave the country. He emigrated to the United States in 1884.

After arriving in New York, šliūpas, together with Mykolas Tvarauskas, began to publish Unija (Union, 1884- 1885). The name of this newspaper, which alluded to the political union that once existed between Lithuania and Poland, reflected the fact that, at that time, many Lithuanians, both in Russia and in the United States, considered themselves to be both Lithuanians and Poles. Šliūpas soon rejected this idea, however, and in the periodicals which he later founded or edited and in speeches, he emphasized the linguistic, historical, and cultural distinctiveness of the Lithuanian people and urged his countrymen to establish churches and mutual aid societies that were separate from the Poles. This irritated the Poles who suspected that he was a Russian spy. Šliūpas helped to organize the first purely Lithuanian congregation in New York in 1885, but his cooperation with the clergy proved to be shortlived. In his publications he frequently accused the Lithuanian clergy of pro-Polish attitudes or teachings, misconduct, ignorance, and prejudice, and blamed them for widespread ignorance and bad moral behavior among Lithuanian immigrants. At the same time Šliūpas promoted “freethinking” as an alternative to the teachings of the church. This caused indignation and fear among the Lithuanian clergy, who accused him of being an atheist and an anarchist (in a Pottsville, Pennsylvania court, priests tried to convict him for atheism, but the jury disagreed).

Šliūpas founded or co-founded several Lithuanian American organizations, none of which could escape the polarizing shadow which he cast: the Lietuvos Mylėtojų Draugija (Friends of Lithuania Society, 1885-1888); the Susiwienimas Wisų Lietuwninkų Amerike (Alliance of All Lithuanians in America, 1886-1888), which was the first national federation of Lithuanian mutual aid societies; the Lietuvių Mokslo Draugystė (Lithuanian Learned Society, 1889-1896), the Lietuvių Laisvamanių Susivienijimas (Lithuanian Freethinkers Alliance, 1900-1910), and the Lietuvių Socialistų Sàjunga (Lithuanian Socialist Alliance, 1905-present). He soon quit the last-mentioned organization when it became more interested in world revolution than Lithuanian independence.

From 1889-1891 Šliūpas studied medicine at the University of Maryland in Baltimore, graduating with a doctor of medicine degree. He practiced medicine in Pennsylvania (Wilkes-Barre, Plymouth, Shenandoah, Scranton, and Philadelphia) and New York. Šliūpas ran twice for the Pennsylvania state legislature, first in 1896 on the Populist Party ticket, then in 1900 on the Socialist Party ticket, but lost both times.

During World War I Šliūpas played an important role in raising relief funds for Lithuanian refugees in Russia and was involved in diplomatic activities to secure autonomy or independence for Lithuania. He served as President of the Lietuvos Gelbė- jimo ir Autonomijos Fondas (Lithuanian Relief and Autonomy Fund), one of three Lithuanian American relief funds established to help Lithuanians in Russia affected by the war, and was a member of the Executive Committee, which coordinated the relief efforts of these three funds, distributed information on Lithuania to the American public, and lobbied U.S. policymakers. From 1917-1918 he visited Lithuanian and Latvian refugees in Russia, trying to convince them of the desirability of forming a Lithuanian-Latvian Republic, an idea which he had promoted for a long time, and served as the Lithuanian American representative at Lithuanian conferences in Petrograd and Stockholm.

After Lithuania declared its independence in 1918 he lobbied the governments of Great Britain and the United States to recognize the new state, successfully convincing U.S. Senator Henry Cabot Lodge, Chair of the Senate Foreign Relations Committee, that Lithuania deserved independence. From 1918-1919 he participated in heated discussions of Lithuania’s right to self-determination and the future Polish-Lithuanian boundary with members of the Polish National Committee (Roman Dmowski and Ignacy Paderewski, among others), which the Allies recognized as Poland’s legitimate government, in Washington and Paris. In 1919 he helped to organize the Lithuanian legation in London and served on the Lithuanian delegation at the Paris Peace Conference. He later served as Lithuania’s envoy to Latvia and Estonia from 1919-1920.

Šliūpas returned to Lithuania in 1921, teaching in the high schools of Biržai and Šiauliai (1921-1923), and teaching the history of medicine at the University of Lithuania in Kaunas (1925-1930). In recognition of his many achievements, the university awarded him honorary doctorates in medicine, history, and law. Šliū- pas refused to participate in the 1926 coup that replaced the democratically elected government of Lithuania with the authoritarian regime of Antanas Smetona. Before the coup he had been approached by a group of officers in the Lithuanian army who asked him whether he would be willing to serve as President in a new government. In 1933 he was elected mayor of the seaside resort of Palanga, serving intermittently until Lithuania was occupied by the Soviet Union in 1940. He is credited with changing Palanga’s status from a district to a full city.

Šliūpas was invited to join the proCommunist government, but he refused. He initially welcomed the Germans when they invaded the Soviet Union because it brought an end to Communist rule in Lithuania. He served briefly again as mayor of Palanga, but, when he tried to protect Jewish children, was forced by the Germans to resign after only one month.

As World War II drew to a close Šliūpas, along with thousands of other Lithuanians, fled to the West. He died in Berlin on November 6, 1944. His ashes were brought by his second wife and son to the United States, where they are buried in the Lithuanian National Cemetery in Stickney, Illinois, near Chicago.

Throughout his life Šliūpas was a popular public speaker and a prolific writer and translator. By 1907 he had delivered more than one thousand public addresses or lectures in Lithuanian and English on political, social, religious and scientific subjects. He wrote more than fifty books and pamphlets in Lithuanian, English, and Polish, and translated more than a dozen works from English, German, Russian, and Polish into Lithuanian. He also contributed numerous articles to Lithuanian, American, British, Swedish, Polish, German, French, and Russian periodicals.

His original works and translations fall into two main groups. The first is made up of works about Lithuanian history, literature, and mythology, and includes Litwini i Polacy (The Lithuanians and the Poles, 1887), one of the first works to raise the idea of Lithuanian independence; Lietuviszkiejie rasztai ir rasztininkai (Lithuanian Literature and Its Authors, 1890), the first historical survey of Lithuanian literature; Essays on the Past, Present and Future of Lithuania (1918), which discusses the hardships that Lithuanians faced during World War I and outlines his proposals for relations with Lithuania’s neighbors in postwar Europe; and Lietuvių, latvių bei prūsų arba baltų ir jų prosenių mitologija (The Mythology of the Lithuanians, Latvians and Prussians, or of the Balts and their Ancestors, 1932).

The second group consists of works promoting materialist or atheist ideas, including Dievas, dangus ir pragaras (God, Heaven and Hell, 1893), which was published secretly in East Prussia; Tikyba ar mokslas? (Religion or Science?, 1895); Gyvenimas Jezaus Kristaus (The Life of Jesus Christ, 1896); and Tikri ir netikri šventieji (Real and Unreal Saints, 1907, 1930), the second edition of which was confiscated in Lithuania. Šliūpas wrote little on medical topics. One of the most noteworthy is Senovės ir viduramžių medicinos istorija (A History of Ancient and Medieval Medicine, 1934). Some of the newspapers, books, and pamphlets mentioned in this article are available online at www.epaveldas.lt.