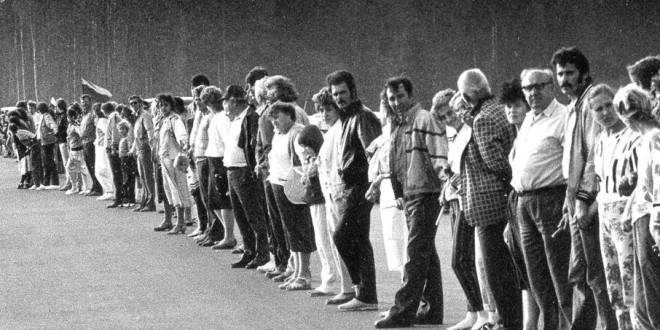 Angonita, who first came up with the idea of the Baltic Way?

It is hard to give a definitive answer. In May of 1989 it was discussed at the Second Baltic Assembly. I believe that it may have been the Estonian delegation that first suggested the idea. But it is difficult to establish the origin since, there were many proposals – hundreds. Similar ideas were germinating in Lithuania, as well. What was common theme? How can Lithuanians, Latvians and Estonians meaningfully commemorate the anniversary of the Molotov-Ribbentrop pact, how can they condemn it, how can they most forcefully negate it.

A year earlier, in 1988, the pact was condemned at a small but significant rally, which took place at

the Adam Mickiewicz monument in Vilnius. But we wanted organize a unique protest, a massive one. We had to include Latvia and Estonia and not just Lithuania. It was essential to proclaim to the world and to Soviet autocrats in Moscow that we will be free!

The initial concept was rather different. We considered using human beings to write out the words “Molotov-Ribbentrop Pact” and this was supposed to cover the area from Minsk to Tallinn. There were other ideas. But we all felt that we needed something that would bind all three countries together. I can’t say with certainty who was the first one to say we need a human chain, but I think, as I said, it came from the Estonian delegation.

Was is difficult to pull together such a complex project, to coordinate everything, anticipate difficulties?

Of course, it was very complicated and at times chaotic. At first it seemed like a pipe dream far removed from reality and a Soviet reality at that.

The organizational work began on July 15, 1989, right after the Baltic Assembly, which took place in Paron, Estonia. There it was decided that we would shoot for August 23rd, and it was finally agreed that we would organize a human chain. And so we sprang to work.

How did the organizational work for the Baltic Way proceed?

If you remember, at that time many organizations were being reestablished: the scouts, the “Ateitis” movement, army reservists, political parties, various other movements and societies. They all had representatives who maintained ties with 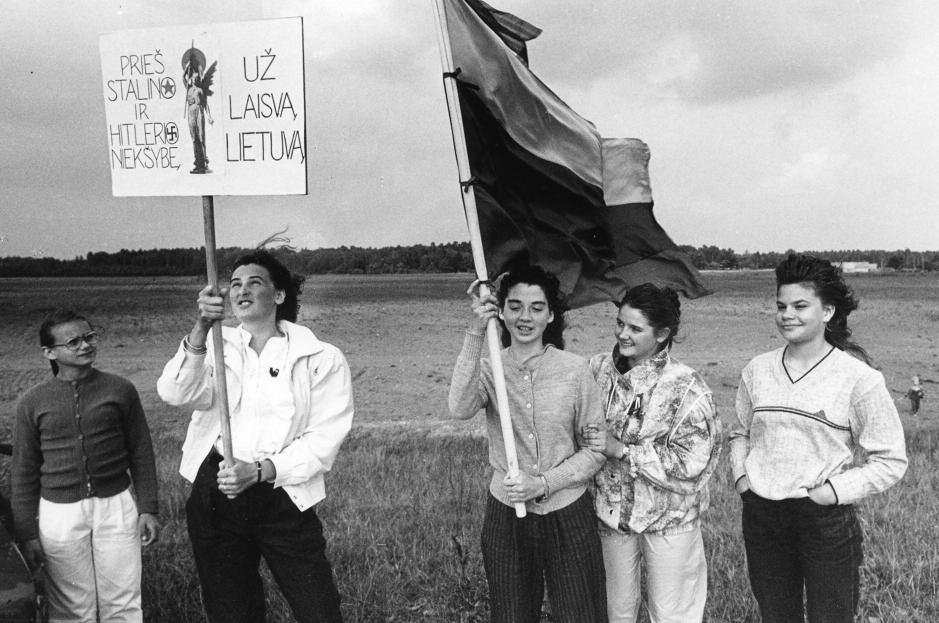 Sąjūdis. It was a rather intense summer. At the beginning the Sąjūdis regional coordinators and the representatives of the newly reestablished organizations convened, and the planning commenced in earnest. To be honest, we had our doubts, because it seemed to be an impossible task – humanly speaking it was a daunting, impossible undertaking. But without much discussion we took out maps and started to calculate how many people could come from which city or region, how many meters or kilometers should be assigned to a particular region, to each organization. We calculated and calculated, and calculated – how many meters each human being, with arms outstretched, could take up, and then we multiplied, multiplied, multiplied. It was an overwhelming, a highly technical undertaking. We worked day and night, without rest, forgetting about meals or sleep… We even considered the possibility that there may a shortage of participants in some rural areas. We decided to ‘cover’ the human gap with black ribbons and rows of burning candles. The regional representatives were told to have several meters of black ribbon and candles on hand. The ribbons and the candles were meant to symbolize the ones who were with us in spirit but could not come because they had perished in the forests, in the ice fields of Siberia, had died in the coal mines, in the work camps, had not lived long enough to witness the day when we declare to the world our determination to be free again.

When the routes of the “Baltic Way” had been distributed, another stage began, which in some ways was even more complicated – we had to anticipate logistical issues: how people would get to the “Way?” Where would they park their cars? 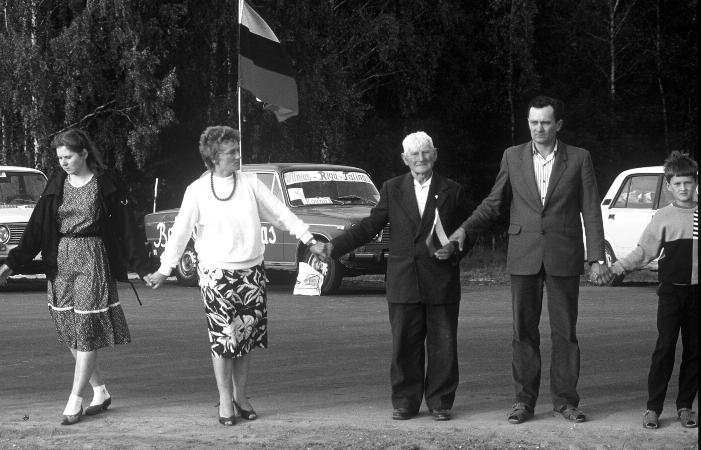 People were coming to the highway from all parts of Lithuania. People came from the Varėna region, from Mažeikiai, from Lazdijai… from everywhere to join in the “Baltic Way.” They were going to be far from their own homes. To avoid traffic jams some regions were directed to take roundabout routes, to come through on forest trails in order to avoid congestion. Amazingly, everything was planned down to the smallest detail. That was unique because it was not just the people who lived in the towns or villages along the Vilnius-Tallinn highway who came out to join hands, but also those who lived tens or hundreds of kilometers away. For example, the inhabitants of Nida, if I remember correctly, were assigned a place on the highway by Panevėžys, the people from Marijampolė had to stand in the Ukmergė region, the people from Šalčininkai had their own territory, the people from Kaunas had a 20 kilometer stretch assigned to them, the people from Vilnius covered the line from Gediminas Castle to the 37th mile marker on the highway and so on. Even Lithuanians from outside Lithuania had their assigned section. They stood with American flags right at the city limit for Vilnius (at the place where squares of new apartment buildings now stand), and another large group of immigrants was assigned to Kaunas – their place was from the 95th to the 105th kilometer on the highway, about at the place where the shrines in memory of the Baltic Way now stand.

“How did the Soviet press react to the Baltic Way?

It’s ironic, but it was the Soviet press which wrote the most about this demonstration. A few days after the demonstration, the Soviet press wrote with great horror that a wave of nationalism of a previously unseen magnitude had washed over the Baltic countries – millions of the citizens of three countries were demanding their freedom. “What? Freedom? How could they not feel free in the tender embrace of Soviet Russia?” According to them, things that were incomprehensible were taking place in the Baltics. “What do those people need? They have bread, the factories are working, they have a place to live – so what greater freedom to they want? Say what you will, but Soviet citizens are the freest and happiest people in the whole world! Here there is no unemployment, there is no exploitation of the working man, you don’t have to be a slave to fat imperialists, democracy is overflowing… This isn’t like America, where black people are oppressed…” 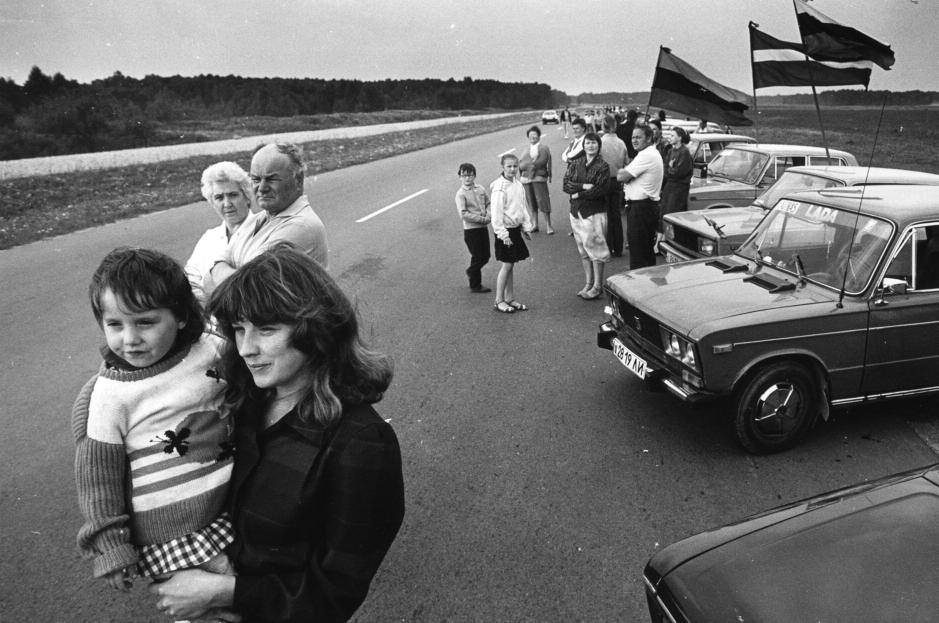 “Did you have a large organizational staff?”

It is hard to gauge. We were in the central staff, but towns and regions accomplished significant tasks themselves. Maybe hundreds of people joined in preparing for the Baltic Way. The only miscalculation – something we just did not anticipate – occurred when people came not just in buses (which we had ordered for the event) but in their own cars from places where they were visiting relatives or from vacation sites. That is why in some places there was need for the black ribbons and candles, there the human chain was four to five rows deep.

“How did you succeed in coordinating such a mass of people?”

We came up with a simple solution. We asked everyone to have portable radios and to listen to Lithuanian radio constantly. Every minute we provided information to the announcers from the Lithuanian radio: which locations had less people, where more people were needed, where the traffic jams were. They directed the waves of people to the right places. Without the radios we would have been lost. You can see in the photographs from the time that there are radio receivers on the asphalt. And the territorial coordinators called us and transmitted information to us. The highway police was also very helpful.

“How did you get the idea to strew flowers?”

That was planned differently at first. The evening before the demonstration Sąjūdis had a program on Lithuanian television called “Atgimimo banga” (The Wave of Rebirth). During the program people were asked to bring some flowers to the Sąjūdis headquarters on Gediminas Street in Vilnius, right in front of the Cathedral. On the day of the demonstration, people started bringing flowers by the armful from the early morning. Some people picked the most beautiful flowers from their own gardens, others bought them in stores and flower markets, and everyone just kept bringing flowers. We did not foresee that kind of enthusiasm, that kind of passion… The Sąjūdis headquarters was inundated with seas of flowers from the earliest morning hours… The flowers filled several trucks, which took them to the Kaunas airport. Then they were dropped on the heads of the participants…The planes could not accommodate the mass of flowers we received. The planes took off, dropped the flowers, returned, loaded up with more flowers and took off again…

“Where were you standing, Angonita?”

Nowhere (laughing)! I was in Sąjūdis headquarters with the other organizers, because the telephones did not stop ringing for a second. Announcements, questions, suggestions kept coming in. And then at the crucial minute, as I held a telephone in one hand and gave a piece of information to the radio, I leaned out the window and with my free hand I “locked into” the Baltic Way. It was an amazing sight to see. I could not keep back my tears.

Thank you, Angonita, for sharing the Baltic way with us.

Previous Vagabond of the Grand Duchy of Lithuania: From Harems of Turkish Sultan to Captivity of Balkan Thief
Next Russia’s psychological warfare – battles without arms