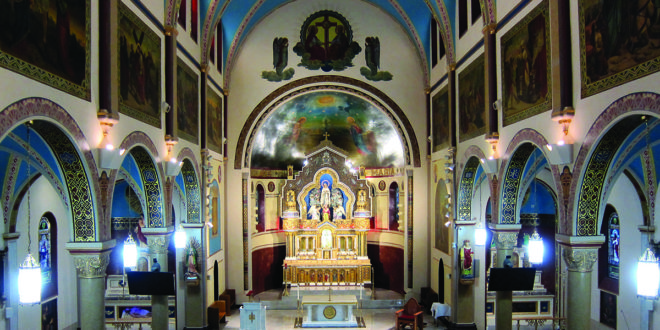 The Reconsecration of the Church of the Annunciation. The Brooklyn church has served the Lithuanian community continuously since 1914

April 25, 2019 Culture, Diaspora, Events, History-1900+, Religion Comments Off on The Reconsecration of the Church of the Annunciation. The Brooklyn church has served the Lithuanian community continuously since 1914 2,133 Views

For New York area Lithuanians and the entire American Lithuanian community as well, March 24th was a special day. On that date after a yearlong restoration, the historic Church of the Annunciation of the Blessed Virgin Mary Church in Brooklyn, NY, was solemnly reconsecrated.

Since 1914, when the Lithuanian community acquired the church, it has served successive generations of Lithuanian-Americans. The church has been the center of Brooklyn’s Lithuanian religious and cultural activities. In 2017, a major church renovation was undertaken, which took more than a year to complete. This was the most extensive restoration of the church since its construction in 1870.

In the course of the restoration, the entire roof was replaced, the old organ was repaired, the interior of the church was renovated, the pews were refinished, and modern heating and cooling plants were installed. Thus the church was made ready for the 21st century. The Lithuanian community was gratified that in the course of the extensive repair work the external and internal beauty of the church was preserved, especially its Lithuanian attributes – wooden crosses and wayside shrines and frescoes of Our Lady of the Gates of Dawn and that of Saint Casimir.

The three ethnic communities gathered in large numbers for the celebration and welcomed His Excellency Brooklyn Bishop Nicholas DiMarzio, the principal celebrant. Six priests, including Rev. Vytautas Volertas and Msgr. Jamie J. Gigantiello assisted. The latter was officially appointed as pastor that day.

The new altar was blessed with sacred oil used during the sacraments of Baptism and Confirmation. The Readings were read in Italian and Spanish, the Gospel in English, and the Psalm was sung in Lithuanian. A joint Lithuanian, Spanish and Italian choir sang in their respective languages. Noted Lithuanian singer Simona Minns sang in Lithuanian accompanied by the traditional Lithuanian folk instrument, the kanklės.

Ambassador Kriščiūnas in his prepared remarks thanked all those who helped restore this shrine. He acknowledged the critical role that the Catholic Church played in Lithuania’s history, especially in its struggle for freedom and the preservation of Lithuanian identity in the United States.

At the conclusion of the Mass, parish children placed flowers before the image of the Virgin Mary. The children then shared traditional Marian devotions adopted by their respective communities. The Lithuanian community, represented by candidates for the Sacrament of Confirmation, made a presentation regarding Lithuania’s noted Marian shrines, the Gates of Dawn in Vilnius and the Marian apparition in Šiluva. The students of the Maironis School sang the hymns, “Marija, Marija” and “Palaimink Dieve Mus,” (Bless us, oh Lord).

WILL THERE BE FRUIT?

Bishop DiMarzio in his sermon compared the Church with the fig tree which was the subject of that morning’s gospel. The master intended to cut it down for lack of fruit. The gardener urged him to wait: to water and fertilize it with the hope that it will bear fruit next season. Now it is true that a number of Lithuanian churches in the United States have been shut down and some demolished. They were not given a second chance. On the other hand, New York’s Annunciation Church is now repaired, bright, and inviting. It is a sacred space where religious celebrations can be celebrated, where Christian faith and love can be nurtured and grow. It is a sanctuary for the entire Lithuanian community to pray and worship.

The renewed, refurbished Church of Annunciation awaits the faithful, and time will tell whether we, as the fig tree, will grow and give fruit. This will depend on us; our participation in the Lithuanian Mass will confirm that the church is important to the Lithuanian community.